Showing posts from July, 2019
Show all

Scaling the Heights in Norway

The Roof of Norway I did not literally climb mountains but traversed the highest mountain pass in Northern Europe through the dramatic Norwegian countryside. We traveled by car through the Sognefjellet road that began in the town of Lom and ran alongside Bøver River.  Buried under a pile of snow for much of the year, the road is only open between May and September.  We were warned that we would be driving through a very narrow and bumpy road and that there would be no services along the way.   We traveled in June and I saw lots of greens trees. The valley view was specked with occasional brown houses and a few turf houses. As the road climbed higher I saw waterfalls, cabins up in the mountains, and a glimpse of snow peak mountains. Our guide explained that Norwegians love the outdoors so it’s common to see cabins and hiking trails up in the mountains. Also, the government believes that nature and country are for everybody, so everybody is free to camp out and hike.  I could not st
Post a Comment
Read more 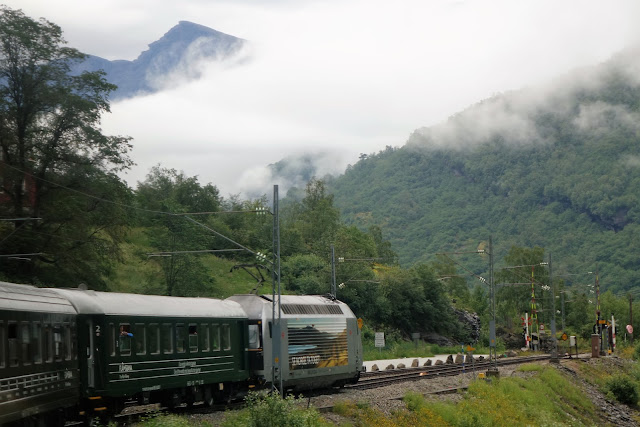 Norway is  home  to some legendary scenery in Northern Europe and the Flam Railway ( Flåmsbana)  is among the most famous. It  offers a panoramic view of Norway's wildest and most picturesque landscape.   Flam Railway is th e steepest standard-gauge railway in Northern Europe.  I took the train from Aurlandsfjord to the high mountains of Myrdal and ended at the Klosfossen Waterfall before taking the transfer from Myrdal to Voss. As the train started to move, I heard the announcement, “The Flam Railway is 20 kilometers long. Our journey will take about one hour. The steepest climb on the Flam Railway is 1 to 18.”  There was also commentary in different languages along the way.   Our guide warned us that we would not be able to take good photos from a moving train, but I kept my eyes peeled for the opportunity to take pictures. The Flam Railway was one of the most amazing train rides I've experienced and the most beautiful. For me, it’s not the technology that made it m
Post a Comment
Read more

I came to Norway for the fjord land and boy it did not disappoint. I went through Sognefjord , Norway's longest and deepest fjord and its famous arm the Nærøyfjord , listed as a UNESCO World Heritage Site and has also been rated by the National Geographic Society as the world's number one natural heritage site along with the Geirangerfjord.  I should have been disappointed because it rained when we were going through the fjords, but I'd guessed God perfected the art with the rain. The mist added drama to the most stunning scenery: the mountains along the fjords that rise to more than 5500 feet and the waterfalls that start from the clouds and plunge to emerald green water.    The whole scenery begged to be stared upon; I took a few pictures and continued to video record the whole trip. The camera could not do justice to the unbelievably stunning scenery, and no words can describe what the whole experience of going through the fjords felt like but I'm still in awe. T
Post a Comment
Read more 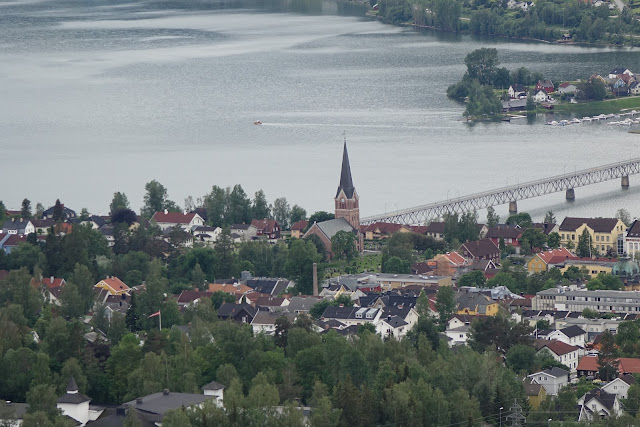 I came to Norway to see the famous Norwegian fjords. But before seeing the fjords, I traveled through the amazing landscape of Oppland county and saw spectacular scenery. Lillehammer I knew Lillehammer was the site of the Winter Olympics and have been once the center of the skiing world and still a skiing paradise in the winter season. So, I was not that excited at going to Lillehammer in the summer. But it was part of the itinerary of this trip. Obviously, the scenery was totally different from the winter season. Lillehammer was surrounded by mountains, forests, and lakes. It was a gorgeous scenery nonetheless. One of Lillehammer’s most famous tourist attractions was the remnant of the 1994 Winter Olympic ski jump venue, officially known as the Lysgårdsbakkene Ski Jumping Arena. Our guide said that the Ski Jump can be called the "New  Lysgårdsbakkene" because there was an old ski jump that was built there in 1903 and other ski jumps that collapse in the year 1966.  Th
Post a Comment
Read more
More posts