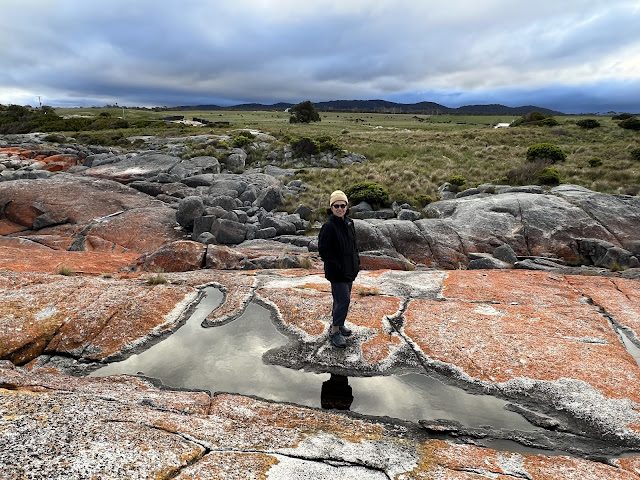 Part 9 – The Bay of Fires From Swansea we headed to the Bay of Fires, another popular destination in north-east coast Tasmania. Part of the day’s schedule was to stop in Bicheno to see the blow hole.  Bicheno is a laid-back town of about 950 that is famous for the blow hole, and ‘wildlife and ecology park’. We had a very pleasant drive to Bicheno through very green flatlands. Bicheno After parking our car, we headed to the beach, but it was hard to ignore and not read all the signposts along the coastal walkway. One signpost showed information about the Penguin Tour. Another showed information about the Nature and Wildlife Areas where Tasmania tiger, quolls, wombats and a variety of birds could be seen. Sadly, we did not have time to explore the wildlife in the park and the surrounding beaches in Bicheno, we only had time for the blow hole. We were greeted by an expansive beach of orange-colored granite rocks and boulders. There was a big triangular rock by the water edge.  I ass
Post a Comment
Read more

Part 8: From Launceston to Freycinet “I don’t exactly know where I’m going but I’m going.”  I live by these words when it comes to travel. And it could not be truer than being on a road trip with Ron and Lenny. I could have done some research or quick google search about Tasmania before our trip but no. I left all the travel planning and guiding to Lenny and trusted the driving to Ron since they had been to Tasmania before.  My first impression of Tasmania was that of a sparsely populated place and mostly wilderness. And Ron helped enlarge that image of wilderness when he told me that the cabin where they stayed in before was surrounded by wombats and that I should be able to take a picture of kangaroos crossing the road as they're plentiful in Tasmania. I did not know about the other cities in Tasmania other than Hobart. So, I was a bit surprised when we arrived in Launceston where our accommodation for the night was located. I found Launceston to be a relatively big city. It has
Post a Comment
Read more

Part 7: Cradle Mountain  There is no road to Tasmania, the largest island state of Australia. So, we had to take the ferry to continue our road-trip. I’ve sailed and crossed oceans enough times but never experienced such a rough sail as we had on the ten-hour ferry ride to Tasmania. We got so seasick that we stayed in our cabin throughout the whole ride. We arrived in Devonport at 6:30pm, rushed to our hotel, had dinner and hit the sack. Ron and Lenny visited Tasmania a year ago and had the same itinerary as we had except that we took the reverse route and visited Cradle Mountain first. The Cradle Mountain - Lake St. Clair National Park is one of the most visited parks in Australia. It has many walking and hiking tracks including the Overland Track, one of the most famous hikes in the world. Overland Track stretches 80 kilometers between Cradle Mountain and Lake St. Clair National Park. We set out early so we could have a hearty breakfast in Sheffield. We drove North, which Ron thought
1 comment
Read more

Part 6: Melbourne   We stopped in Colac on the way to Melbourne to checkout some tourist sites. First, we drove to the Botanical Garden over-looking the Colac Lake to have lunch. There was a cafe in the Botanical Garden, but we had some takeout food from the Bakery in Apollo Bay: bread, cheeses, scallop pies and other meat pies (Australians love their meat pies). After lunch, we headed to the Red Rock. It's described as a Quaternary volcano complex - an inactive volcano in the most recent period in the Cenozoic era. We climbed the steps to the lookout to see some volcanic rocks and a 360-degree view of grassy craters, hills, expansive valleys and lakes.  It was overcast and the traffic was moderately heavy as we approached Melbourne. We arrived in Melbourne at around five-thirty in the afternoon.  Our Airbnb was a high-rise apartment in an upscale neighborhood with parking. We picked up the key to our accommodation from a convenience store where we also picked up something to eat.
1 comment
Read more
More posts