Showing posts from March, 2017
Show all

As I mentioned in my first post in this series, I asked our guide where I could find  Bánh cuốn  (a dish that a friend said the best meal he had in Vietnam), our guide replied, “Not in Saigon…wait ‘til Hanoi”. Based on his answer, I made a presumption that to have an authentic foodie experience in Vietnam, one had to travel throughout Vietnam to try the local specialty or regional food. That’s why I predicated my previous posts about Vietnamese food with “where I had been and where I was going”. After a short flight from Hue, I finally reached Hanoi and I could not be more excited. We arrived in Hanoi late in the afternoon, so the first order of business was to find a place for dinner. Our guide mentioned a list of recommended restaurants that offered only one item on the menu, including Cha Ca Anh Vue (a seafood restaurant where they cook the fish in front of you) and Bun Cha. I opted for Bun Cha, an unassuming restaurant popular with tourists because it was visite
Post a Comment
Read more 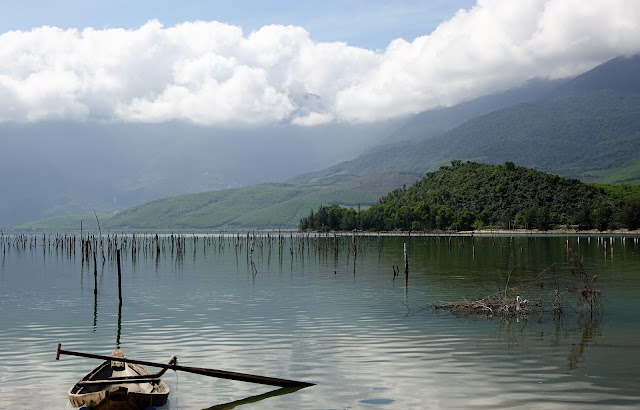 From Hoi An, we traveled by bus to Hue, stopping in Da Nang only to take pictures of the Dragon Bridge. I'd been on six flights since leaving my home city, so the long bus ride to Hue was a welcome break from checking-in and out of  the airport routine. I was wrong in my assumption that the roads in Vietnam were in bad shape. The road to Hue was quite amazing. Heading over a giant mountain pass and before the   Hải Vân Tunnel  (the longest tunnel in Southeast Asia), we had a great view of the city of Da Nang and the South China sea.  A few hours later, we were driving along a narrow stretch of land, an aisle through the rice paddies on the small patch of land between the mountain and the sea. I really enjoyed the lovely scenery. The Imperial City. Hue was a lovely city set on the Perfume River.  Once the capital of pre-French Vietnam, Hue has a few historical and tourist sites like the citadel, and two imperial tombs.  We first visited the citadel, home of the Forbidden
Post a Comment
Read more 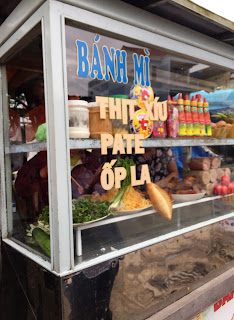 We flew in from Saigon to Da Nang, one of Vietnam’s major ports, situated on the coast of the South China Sea.  From the airport, we immediately hopped on the bus to Hoi An, stopping only at China Beach, said to be a popular destination in Da Nang during the summer time. I was not impressed. From there, we continued along a well-maintained road bordered by the ocean side and granite mountains on the other side. I noticed lots of construction activities by the ocean side, new hotels being built, including big hotel brands such as Sheraton. I also noticed what seemed to be newly planted palm trees. At the end of the highway, the road narrowed sandwiched between large expanse of rice paddies. I saw bikers around the narrow road and a few tourists taking pictures of the women planting rice and the water buffalo. Hoi An is famous for the best Banh Mi, so our guide suggested that we try it for lunch. Our bus suddenly stopped in front of a vegetarian restaurant, but our guide led us
Post a Comment
Read more 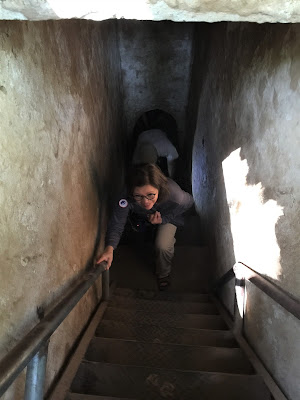 I expected Saigon to be a small city, dusty and provincial, the impression I got from watching ‘the Amazing Race’.  However, when I arrived, it was totally not what I expected.  The city was big and drenched in bright lights. According to our guide, decorative lights were put on city streets for the Chinese New Year, but left for other holidays, if not for the rest of the year.  We arrived late in the evening, so I settled for a Banh Mi (Vietnamese sandwich) that was delivered to our hotel for dinner. That simple Vietnamese sandwich tasted so good, different from the Vietnamese sandwiches I had in California that it made me say, "I'm in Vietnam, indeed!" The exit from the very narrow tunnel The following morning, I joined the half-day tour of Cu Chi Tunnel, a war memorial park.  It was about forty-five minutes drive from the city of Saigon. After watching the documentary about the 120 kilometers of a complex network of tunnels used by the Viet Cong during the Vi
Post a Comment
Read more
More posts