I woke up at three o’clock in the morning to catch a ride to the airport with Pat and George, a couple I met in Turkey. They were flying back to the US and I was on my way to Greece. The couple and I had a lively conversation on our way to the airport until we said our goodbyes at the check-in counter. I was trying to find the gate for my flight and almost at the end of a long walkway when I noticed a man lying spread out like 'the crime scene outline of a dead man' on the floor of a poorly lit terminal. His head rested on his backpack. Soon the airport police officers arrived to take the man’s pulse. The man looked dead. I could not shake the image of a dead man at an airport terminal out of my mind. What if suddenly I dropped dead while traveling, I thought. I could not imagine the process that the police authority must go through to notify the family of a foreigner.

The scene kept replaying in my mind as I arrived in Greece. It was very early in the morning; too early for checking-in to my hotel. Instead of waiting at the hotel, I decided to while away the morning on a hop-on-hop-off bus. Even if I did not get off the bus, I thought it would be a good way to familiarize myself with the city and the tourist sites like the Acropolis, Plaka, and Olympic Stadium that I could explore later. I walked to Syntagma Square through graffiti-filled streets to find the bus stop. The bus should run every 10 minutes, but after waiting for more than 30 minutes, I realized I was at the wrong bus stop. Reluctant to ask for direction from any of the not-so-clean-looking dudes hanging out there, I asked a conservatively dressed man for direction, but he just stared at me and gestured out for me to take my sunglasses off. I then waited to ask the man in pastel suit who was trying to cross the street, but I got the same reaction - he gestured out for me to take off my sunglasses. “What is it about these people wanting me to take my sunglasses off,” I thought. So I ran back to the hotel to complain to the hotel staff about the men who were not willing to help a tourist. I asked the hotel staff if they ‘racially profile’ in Athens because the men I asked for direction both gestured out for me to take off my sunglasses. I was incoherent of course, from lack of sleep and seeing a dead man from an airport terminal that I used the word ‘profiling’. The hotel clerks gave me a “Huh, what the heck are you talking about” look. I also wanted to tell the staff that the graffiti-filled walls and the dark and boarded buildings surrounding their five-star hotel were freaking me out, but I could not voice it out. Was the area safe? I wondered. They gave me another map wherein they highlighted which bus line I should take. 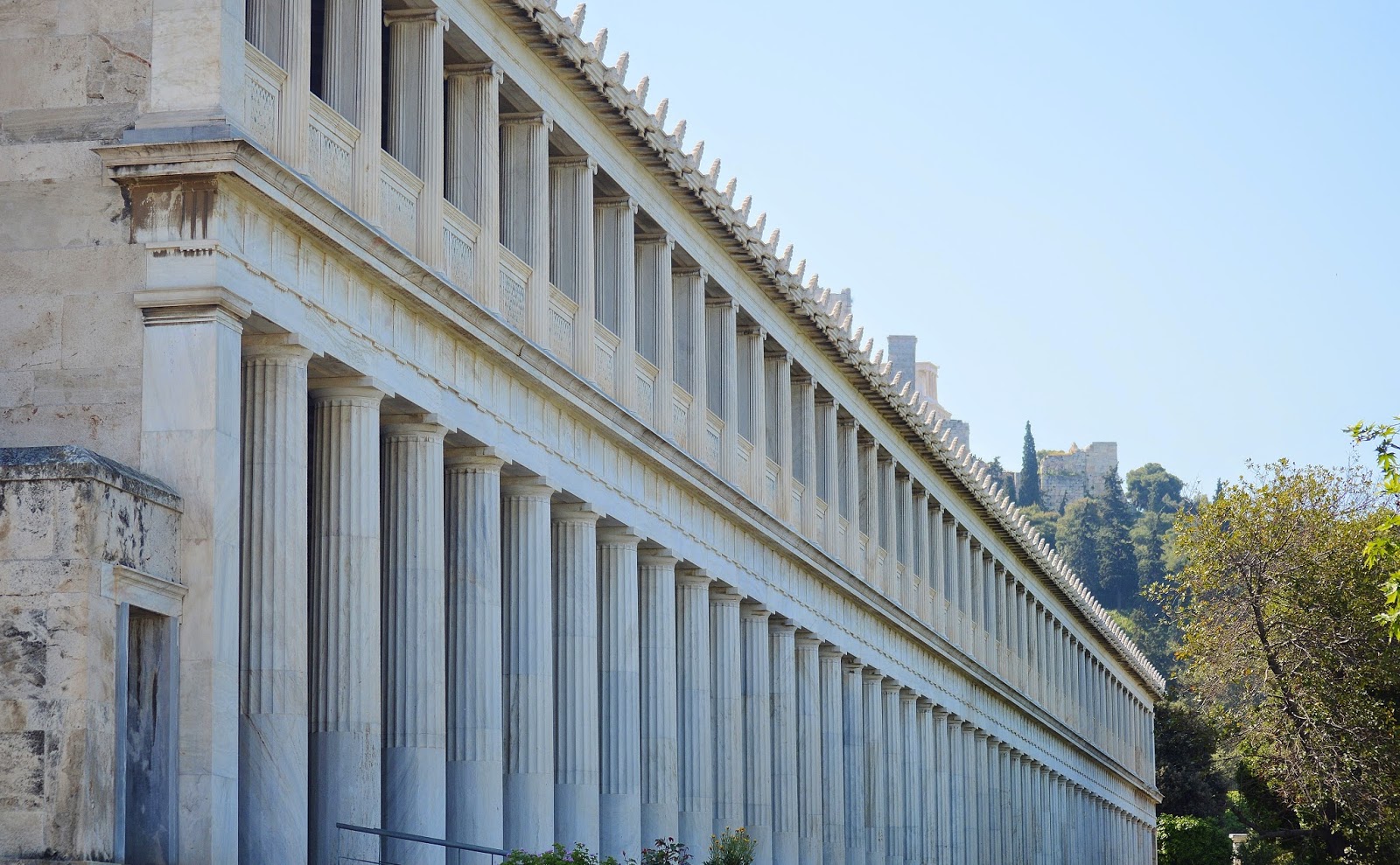 High above the crowded plaza and the narrow streets lined by outdoor cafes was Athens’ most famous attraction - the Acropolis. I decided to get off the bus and go for a short walk instead. It was a long walk uphill and since I already paid the twelve euros entrance fee, I decided to make it a day. I hiked uphill to see the Parthenon. I read about the history of the Acropolis, so it was okay even if I did not have a tour guide. I used the leaflet from the ticket entrance to find my way around the site. What I read about the Acropolis came to life as I reached the top of the hill. But it was odd to see scaffolding all over the place; the Parthenon seemed to be under perpetual construction. A crowd of tourists gathered at the corner where a flag was. It was the best viewing area of the city. I saw familiar landmarks like the Mt. Lycabettus, temples and ruins and the Agora below and the layout of Athens. White buildings covered the hilly city as far as the eye could see. 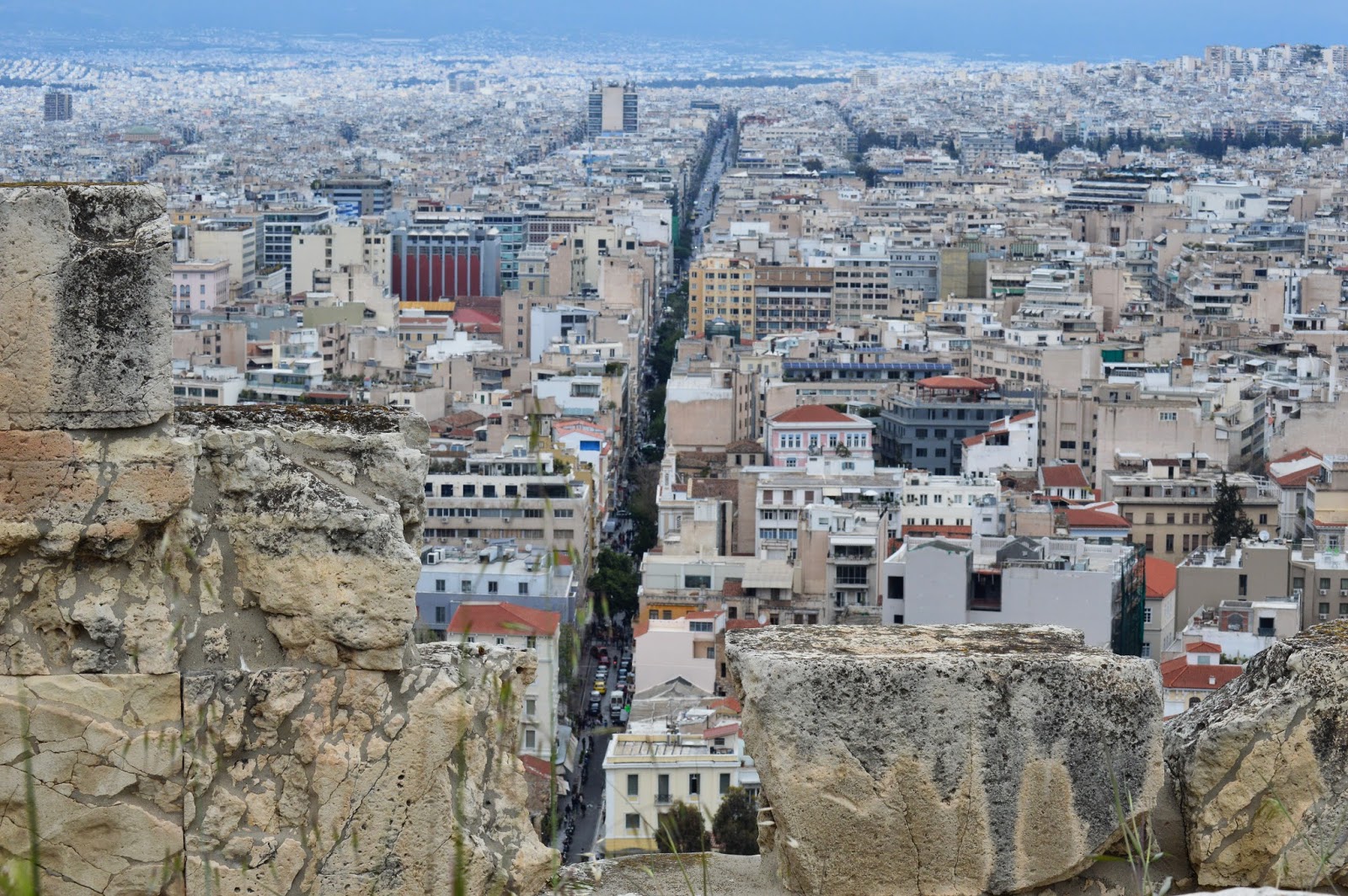 The following day, I visited a museum and explored the city. After two days in Athens, I realized that they do graffiti on a grand-scale. They’re everywhere: in buckled walls, trains, park, statues, upscale shopping center, magazine kiosk, crumbling buildings, tourist sites, and highway walls. I saw a highway wall adorned with life-size work of art and caricature, and huge letters that covered miles of highway walls. I asked a guide about them. She said that the graffiti was nothing militant, neither an expression of rebellion, and that no strict laws were enforced against them. The issue was in trying to wipe them off clean, as they're hard to remove from marble surfaces. I ended up taking more pictures of the graffiti than the famous tourist sites. 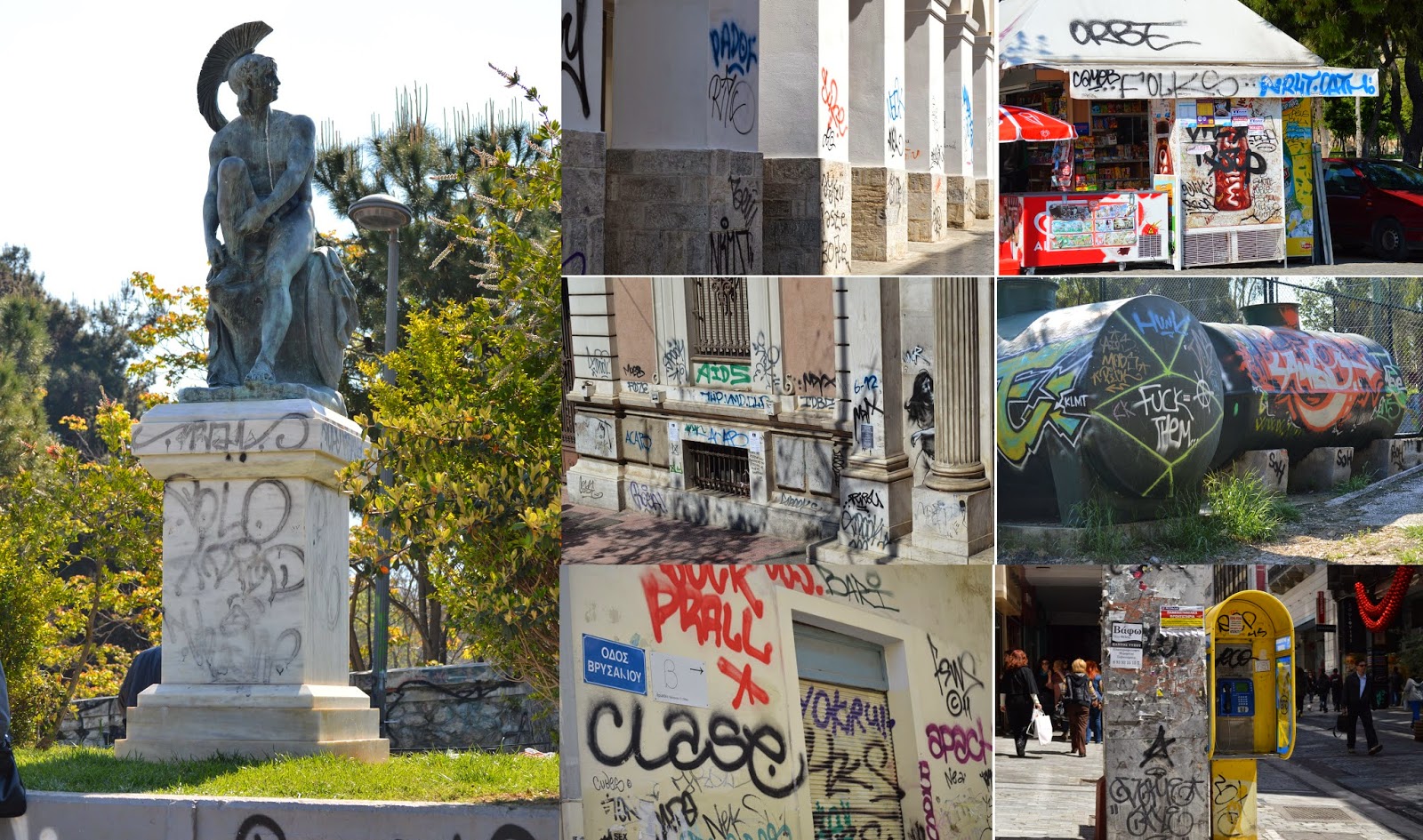 I had come to Athens to see the famous sites and had found myself doing what I do best; wandering through the backstreets to find the real narrative, which tells about the city better than any words or pictures could ever do.

On my last day in Athens, I went to visit an Orthodox Church and passed many kitsch and jewelry stores. Something about the jewelry design from the store window caught my eye. I went inside the shop wherein the storekeeper started sales talking to me. She told me that everything in the store was her grandfather’s original design. She then started to tell me about her family history, about her children, her grandchildren, their nanny and a very sad story about her daughter. She talked to me as if we had known each other for some time. I did buy something, and told her about the behavior of the two men that I asked for direction on my first day in Athens. She said that they probably wanted to help but had to find out first if I was blind. It occurred to me I was wearing my sunglasses early that morning to cover my tired eyes. As I was about to leave, she asked me to wait while she went inside the room. She came back with a beautifully wrapped tiny box, which she handed to me. She said, "A gift for good luck." It was a bracelet with an authentic stone, a 'blue-eye' lucky charm. 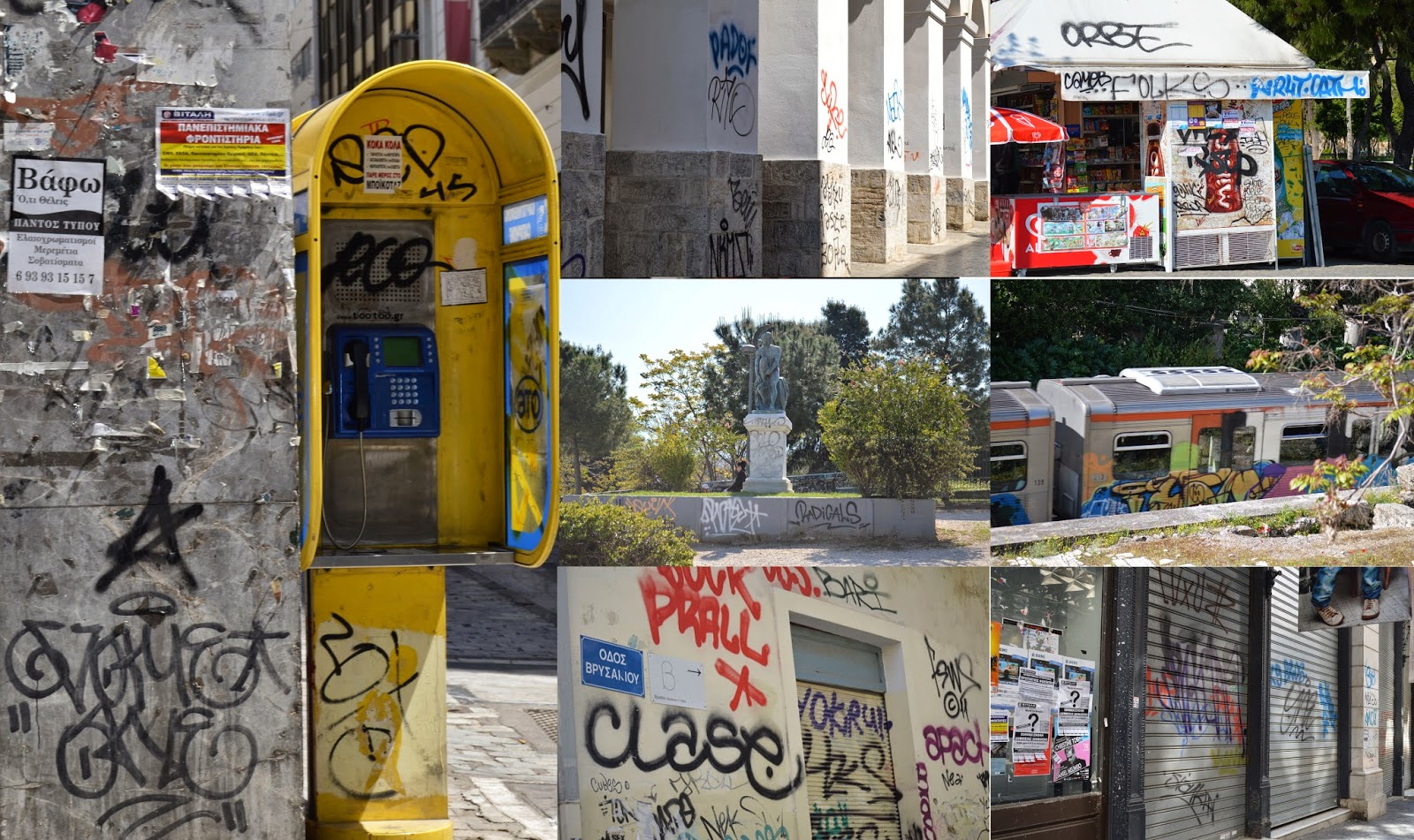 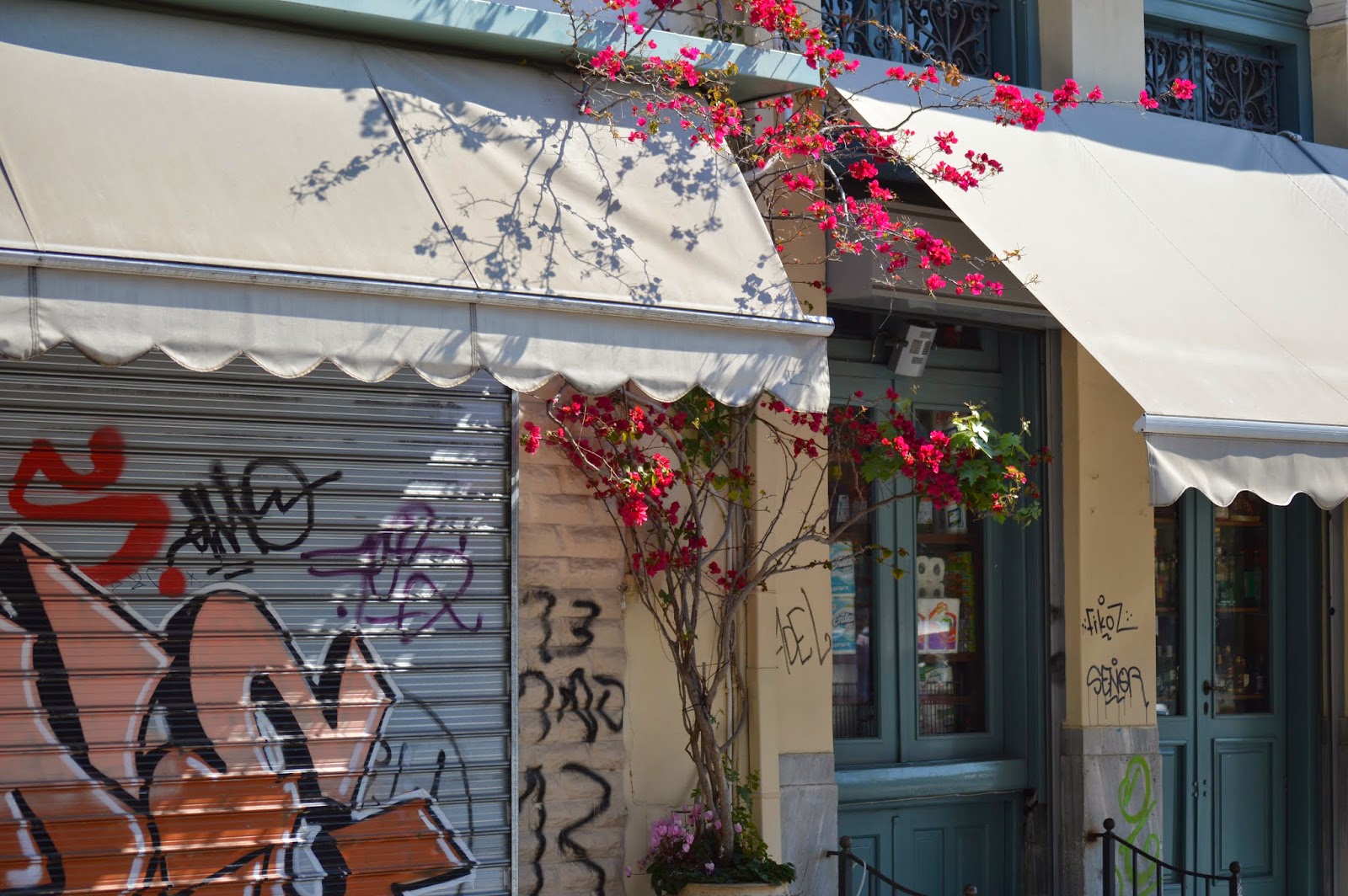 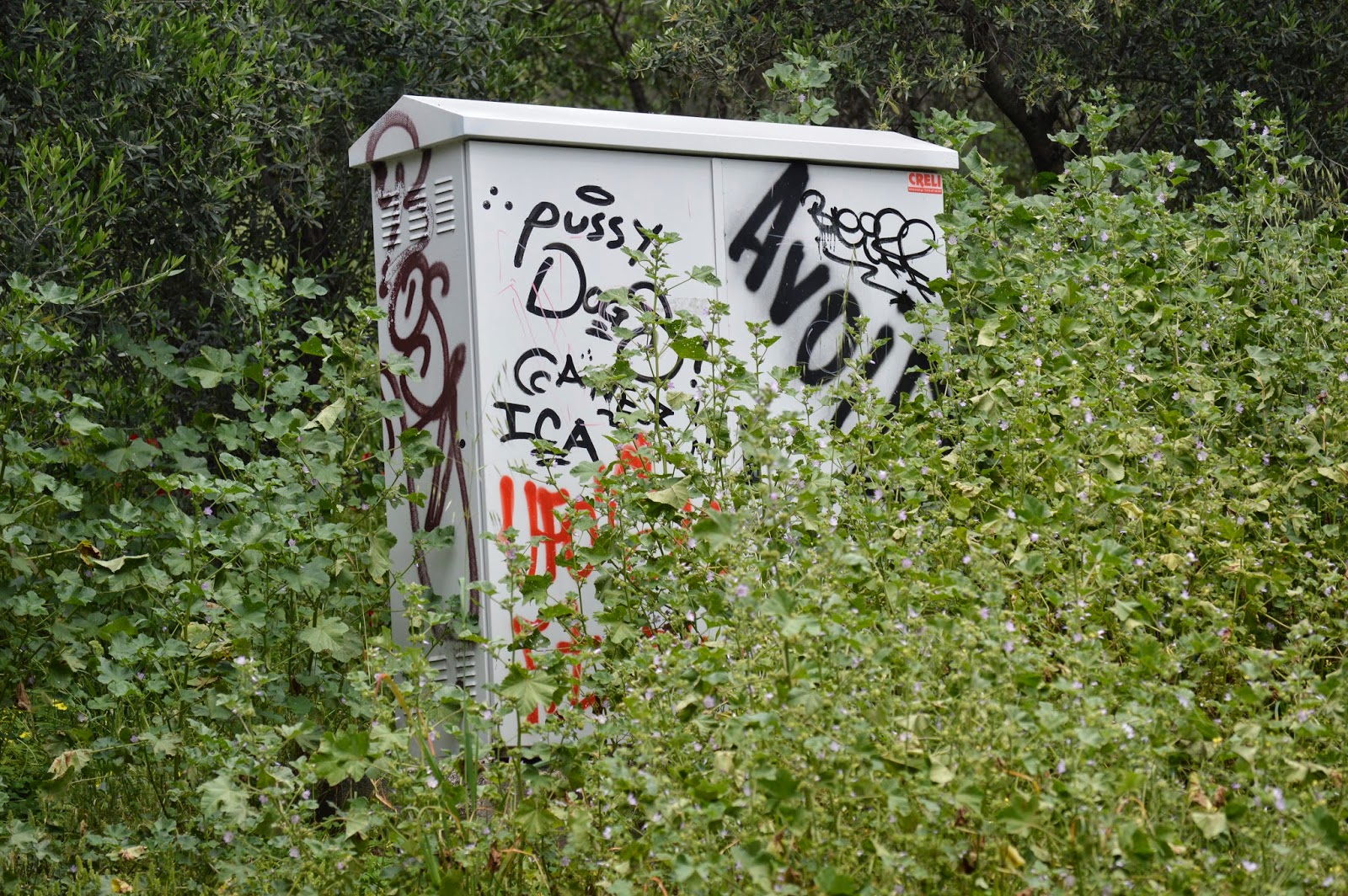 NOTE:
All photos by the author