- September 09, 2012
My plan was to spend some time at the Basque country in Spain and have a relaxing stay at the luxurious Hotel Riscal in Bilbao after my Camino De Santiago walk. But unable to exchange my hotel points, I changed my travel plans and booked a flight to Lisbon, Portugal. Luckily I was able to use my hotel points at the Sheraton Hotel and SPA.  My first day in Lisbon was literally spent relaxing, getting a massage and facial at the hotel/SPA.  The following day, I decided to explore the city.  I walked through Alfama, the oldest section of Lisbon, and visited a museum, historical landmarks, and the World Heritage sites of 'Monastery of the Hieronymites and Tower of Belém'. Lisbon has very similar topography as San Francisco.

A lengthy bus ride the following day, took me along the coast of Sintra, Cascais, Estoril and Cabo De Roca.

In Sintra, the highlight was the Pena Palace, the greatest example of romantic architecture in Portugal, built in 19th century upon a hilltop. Then we explored the Sintra National Palace, former residence of the Portuguese royalty.  Having spent a few days visiting a castle in Segovia, Palace of La Granja de San Ildefornso and royal museums in Spain, I felt as if I had 'royal collection' information overload. So instead of paying attention to the tour guide's narration about the stuff that could be found inside the palace, my attention was focused more at the view outside.  From the museum window, I looked up the hill to see a fortress, green landscape and hills. It reminded me of Lord Byron's "Childe Harold's Pilgrimage". 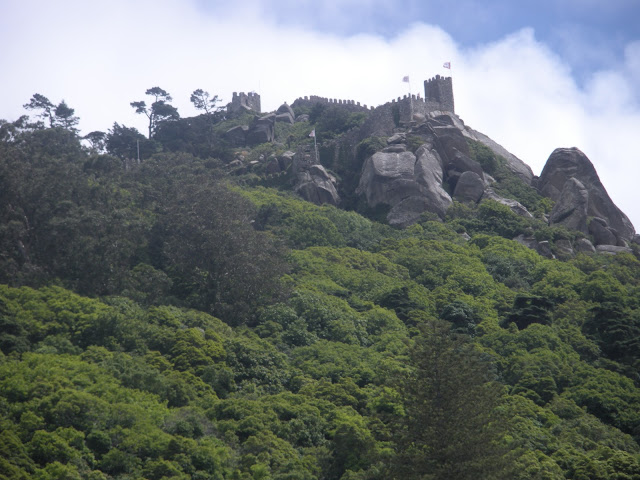 The view of the hilltop from the palace was well worth the entrance fee. Another interesting thing about the Sintra National Palace was the enormous funnel chimney rising above the kitchen. 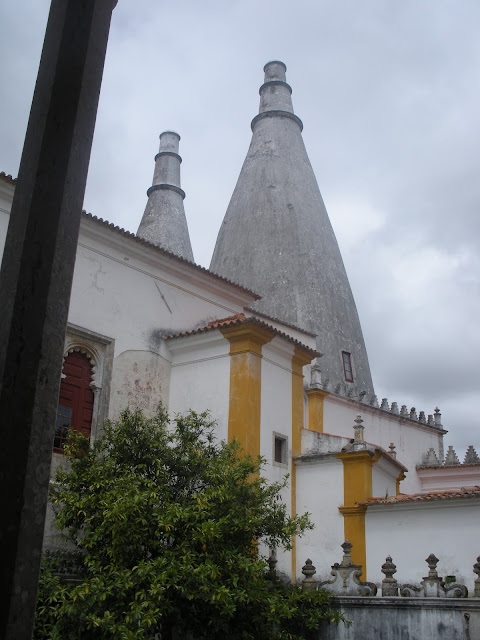 I was looking forward to visiting Cascais described in the tour book as a former small fishing village. However, our arrival coincided with European HOG Rally. Harley Davidsons took over the coastal road that our bus had to take a detour. The streets were lined with mansions where the walls and iron fences were higher than the mansions, something you would see in Beverly Hills. The image of a small fishing village conjured in my mind was a far cry from what I saw. These days Cascais is a playground for the rich.

Our last stop was Cabo da Roca.  The area was picturesque with the lighthouse and the hill covered in ice-plants.  There was also a tourist office where a visitor could get a certificate to prove that he/she had been to the westernmost part of Continental Europe.  Then we found a monument at the top of the hill.  The monument had the encryption: "Aqui, onde a terra se acaba e o mar começa" (where the land ends and the sea begins), "Ponto Mais Occidental Do Continente Europeu" (Westernmost Point of Continental Europe).  There's nothing much to do in Cabo da Roca except to enjoy the view.  Gazing out towards the ocean from the rocky ridge, I felt a little like leaning out over the edge of the world.
Cabo Da Roca Cascais Portugal Sintra