Phuket is the largest island province in Thailand. It consists of the island of Phuket, the country’s largest island, and 32 smaller islands off its coast. It's renowned for its magnificent mountains/karst covered with tropical vegetation, and surrounding azure blue sea and stretches of powdery-white sandy beaches.  I came to Phuket looking to explore the incredible scenery I saw in movies and to relax in the idyllic paradise. Much to my surprise on arriving in Phuket, I found a bustling coastal city and a popular cruise port. Tourism has taken over much of its coast. On our first day in Phuket, we skipped the beach scene and headed to Phang Nga Bay National Park.

We drove to the island’s north end and crossed the mainland via the Thep Krasette Causeway and boarded a motorboat to reach Phang Nga Bay, Established in 1981, Phang Nga Bay National Park lies in the sheltered pale milky-green waters northeast of Phuket Island and is the location of more than 80 awe-inspiring islands. After cruising through the largest mangrove forest in Thailand, we passed a small village where our guide officially welcomed us to Phang Nga Bay National Park. Our guide wittingly said, "The villagers choose to stay away from the mainland. They don't need money here since there's no mall and 7-11s. This village is primarily inhabited by fishermen, so you'll see lots of fish farms".

We continued cruising through mangroves and magnificent limestone karst formations in different shapes and sizes. We went through a cave where I saw some wildlife: bats and birds. "You came on a beautiful day like today, which is perfect for sightseeing. If you want to go swimming or snorkeling, Phang Nga Bay is not the place," said our guide. Phang Nga Bay National Park is all about the landscape and for taking photos. 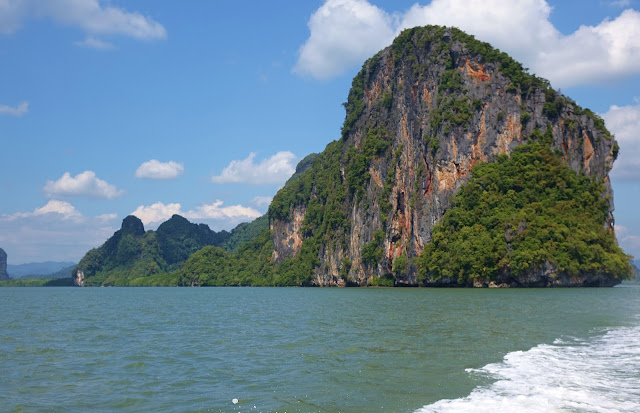 We stopped at Koh Panyee, a small island with a picturesque village extending out across the water. The village is mostly made up of huge vertical limestone cliffs and surrounded by houses built on stilts. We got off the boat and walked through a floating soccer pitch made by kids from old scraps of wood and fishing rafts. An incredible view of the mosque golden domes, backdropped by a huge vertical limestone cliff greeted us. Then we went to explore the village where our guide showed us the school, the mosque, and a health center while narrating a little bit of history of the village. It was mainly inhabited by Muslim fishermen who originally migrated from Indonesia. They were cut off from the mainland and modern amenities, and they have their unique culture that existed for more than a hundred years. Though I found the whole village tour interesting, it felt weird being herded through small alleyways lined with souvenir shops. A very narrow alleyway led to a couple of huge restaurants where we ate our lunch. The restaurants were obviously built for mass tourism. We reconnected with our boat and boatman after lunch. Judging by the number of boats waiting below the huge restaurant, I can only assume that every tourist who visits Phang Nga Bay National Park makes a stop at Koh Panyee. 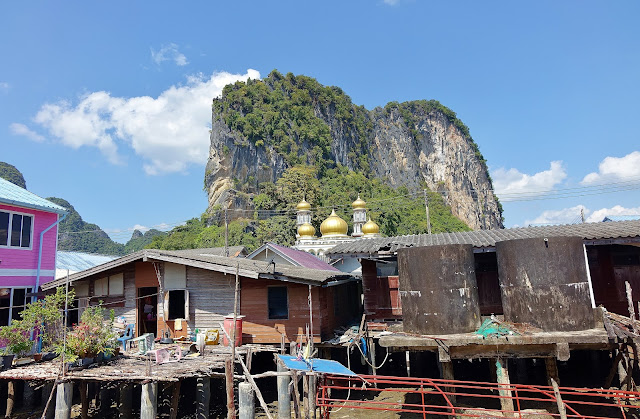 After lunch, we headed to the small island of Koh Ping Gan where part of the James Bond adventure "The Man with the Golden Gun" was filmed. We had to cruise through spectacular limestone rock formations before reaching the Koh Ping Gan. Our boatman/guide busy pointing and comparing the shape of limestone cliffs to animal shapes like that of a dog or a tiger. Some washed out part of the low cliffs revealed ancient drawings and writings, evidence that the region was populated by aboriginal people. 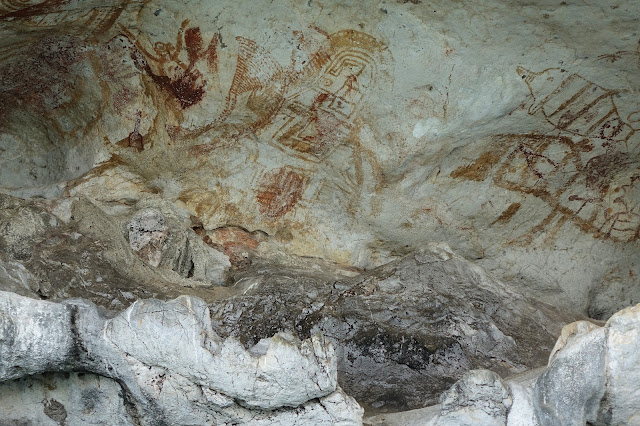 After passing several massive limestone rock formations rising from the sea, we reached the famous "James Bond Island". Visitors arrive and enter the island from the leaning rock side (Ping Gan, the name of the island in Thai). 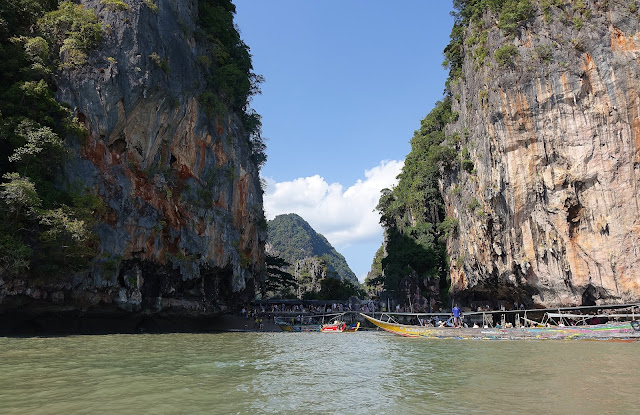 But the main attraction is the single rock rising vertically offshore, which itself is called the "James Bond Island". The real name of the island is Koh Tapu, meaning nail island. 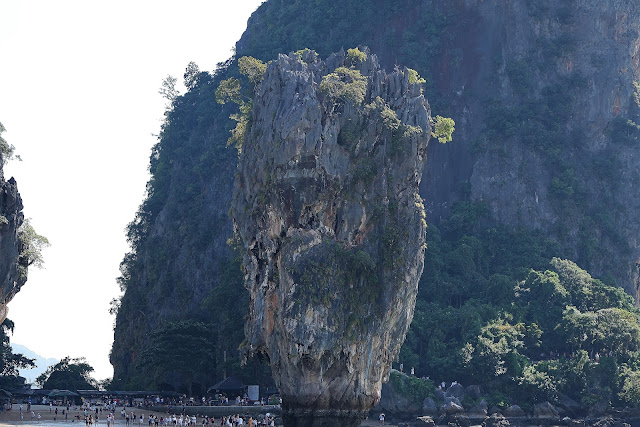 Our guide showed us the caves used as Dr. No's office in the movie. It was very touristy with many stalls selling souvenirs. It was hard to take pictures without the people. 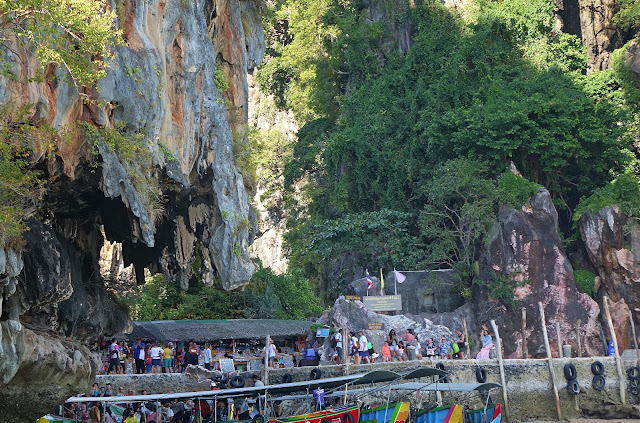 We went around the island by boat. Our guide said, "I'll let you in on this secret, not too many people know about this, but these two islands here were used for another James Bond film "Tomorrow Never Dies". I don't know, but he probably tells this "secret" to all the tourists that he brings to the island. For me, the secret is just to enjoy the view and the spectacular landscape from the boat.

We spent the rest of the afternoon kayaking on the milky-green waters. But our kayaking was cut short because it was low-tide and getting dangerous going through the caves. 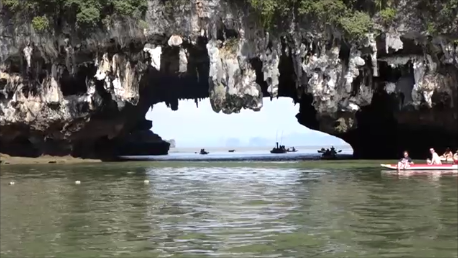 Back in town, I saw one of the most beautiful sunsets as we were driving the hilly part of Bangla Road. But I was so tired from the day’s activities to even pull out my camera to capture the sunset.

The next day was spent relaxing at Patong Beach. It was full of sunbathers, so I did not take any pictures. I waded in the crystal-clear water

Bangla Road, which paralleled Patong Beach, was lively after sunset. It was lined with beer houses, restaurants, and nightclubs with bright neon lights and loud music blasting that could be heard from the street. My new-found friends asked me to join them for a 'ladyboy' show. But I had been to those types of shows during volunteering days in Northern Thailand that I decided to pass up. Instead, I spent my money on food. Phuket is food heaven. We found restaurants that offered every type of cuisine from seafood, rice and noodle vendors along the beach promenade to Mexican food, Indian food and French cuisine on Banga Rd. 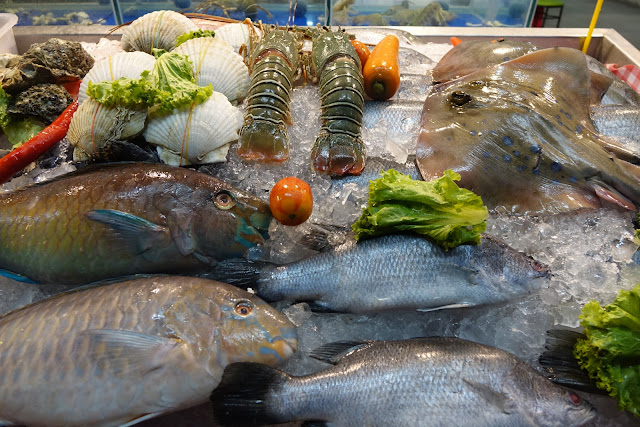 The following day we headed to Promthep Cape, located at the extreme south end of the island. It was a rocky hill. I had a good workout climbing to the top to see the stunning view of the half-moon bay of Nai Ham Beach and the scattered island dotting the Andaman Sea. It was great for taking photos and watching the sunset. 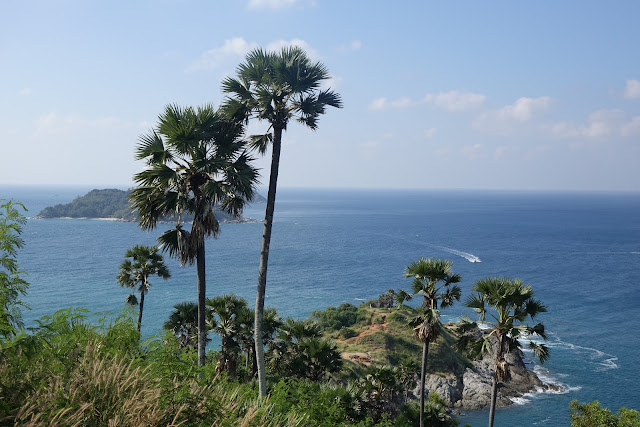 My trip to Phuket would not have been complete without seeing some cultural sites. We stopped at the Wat Chalong, a Buddhist temple, considered the most beautiful and ornate temple on the island. 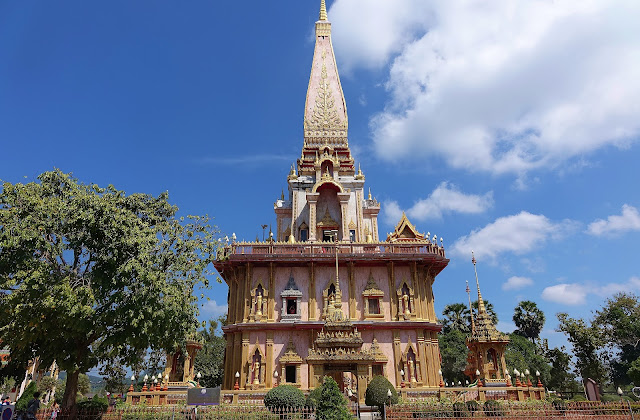 We visited the Phuket Sea Shell Museum that has one of the world’s most valuable collections of seashells including the world’s largest golden pearl. The rest of the town is quite nice. I saw the old part of town with its old Sino-Portuguese buildings and saw great examples of European-Sino-Thai architecture that was quite nice.