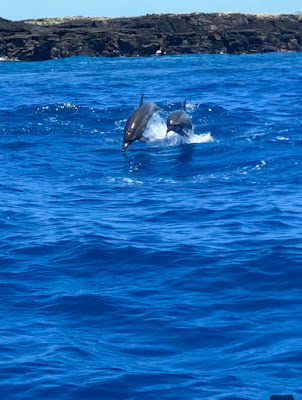 Our outing was not really in pursuit of dolphins. We hired a boat to go snorkeling at Kealakekua Bay or Captain Cook Bay, the most famous snorkeling area on the Kona coast. We set off from Kalaoa, about an hour boat ride to Kealakekua Bay. It was a beautiful clear day, with fresh air in abundance and temperature in the low 80s. Our boat captain got us underway and we made our way from the harbor into the open sea. Our captain pointing to the area where we’re not supposed to be. To be honest, I was actually nervous not wearing a life jacket with our small boat floating in the deep blue sea with crashing waves. But I assumed that he knew what he was doing.

I got confused when our captain started talking about snorkeling with the dolphins. Apparently, dolphins were plentiful in the last couple of days. It didn’t take very long before two dolphins came surfing the wave and then a few more followed. Our captain continued giving us precaution and what not to do if we encountered a dolphin while snorkeling, but we did not drop anchor right then and there. Instead, we cruised on down the waterways heading for Captain Cook.

The coastal scenery was amazing, we stopped at Keauhou Bay Sea Caves and the many blowholes not far from the Keauhou Bay sea caves. The swell and waves crashing against the craggy lava rocks left me in awe of the sheer power of nature.  It was exhilarating.

We finally dropped anchor at Kealakekua Bay for the snorkeling part but it did not live up to my expectation. Perhaps I set my expectation so high having had the experience of snorkeling in the blue Pacific Ocean in the Philippines and Australia. I literally saw a couple of fish, a yellow and a blackfish. Our friend saw an eel. But chasing the waves in the Kona coast was the most exciting part of our snorkeling trip. And I enjoyed the boat ride back to Kalaoa, marveling at the lava rock formations along the shoreline and our small boat floating in the middle of the deep blue sea of Hawaii.

Press play and enjoy the ride.