One of the most pleasant surprises of my recent trip to Romania was visiting charming and photogenic small cities like Timisoara and Sibiu. These cities are a photographer’s dream. Although I would not consider myself a photographer (I was more into travel writing when I started my blog), I have to say that I took so many pictures in my travel to the Balkans. Now that I've had a bit of time to go through the photos and reflect on my visit to Romania, I realize that the photos help me remember everything in detail. Join me as I re-visit my tour to Timisoara and Sibiu Historic Center.

The thick fortified wall and one of the towers along Strada Cetăţii are impressive. The remaining defense wall and four defense towers are the last parts of the third fortification ring built in medieval Sibiu in the 1300s. They were restored in the 60s.

Everybody likes to take a picture of archways, and there's plenty in this town. Notice the flowers sprouting from the hanging teapots (a symbol of hope, I suppose) juxtaposed to the peeling paint before entering the archway.  I don’t want to besmirch Romania’s long and complex history by comparing it to the peeling paint, but you get my drift.

The historic center consists of four market squares. I was at the Grand Square (Piata Mare) the night before, but there's nothing like going through this archway: A dramatic entrance as we travel back to the15th - 18th century.

The Big Square is surrounded by medieval buildings like the Brukenthal Palace (visible from the picture above), the Catholic Church, the Haller House, and the General's house. During the middle ages, the square was used for public gatherings and executions. Today, it's used for public events as well.

Many of the buildings built from the 15th-19th century look as though they have eyes peering from their roofs. They’re actually used as a ventilation system for their attics.

The Bridge of Lies is one of the most important symbols of the city. Rebuilt in 1859 by the firm Friedrich Hütte, it was the first cast iron bridge built without any pylons. Legend has it that the bridge has the power to tell if somebody is lying at the moment of crossing it and makes strange noise as if it would collapse and punish the liar. Thus the name "Bridge of Lies".  The square is divided into two distinct parts from the Ocnei Street going down under the Bridge of Lies to downtown.

This is the view just below the bridge. Part of the lower town with colorful houses that extend as far as the eye can see.

This is the view from Huet Square. The panoramic view of rooftops that extend as far as the eyes can see is fascinating. This gives us a better perspective of Sibiu's geographical location, where it's bounded by mountains.


The Timisoara Orthodox Cathedral is listed on the National Register of Historical Monument. The building is so tall that it's hard to capture the architectural details like the five domes.

Victory Square, formerly Opera Square, is the place where Timisoara was proclaimed the first independent city in Romania on the 20th of December, 1989. At the opposite end of the square, we find the Opera House. 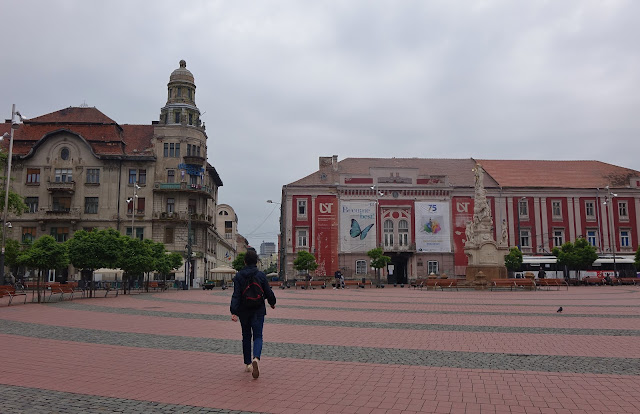 Hanging closed umbrellas. A different take on the new trend of floating umbrellas above the city street(s). 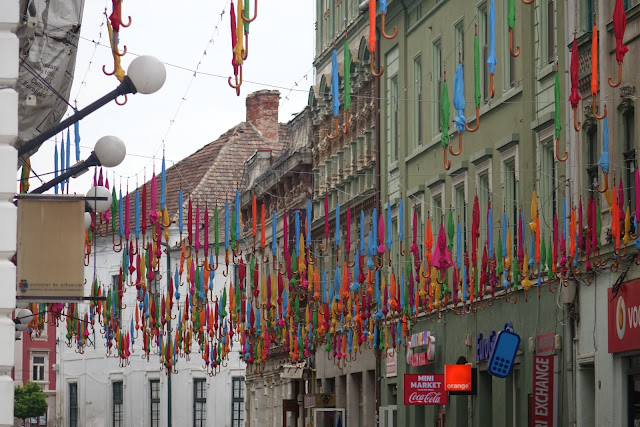 Piata Unirii is an architectural feast for the eyes. It is the oldest market square and the biggest in Timisoara that it's hard to capture the whole place in a photo in a single shot (so I took a video).  First, we see the colorful Bruck House, built in the early 1900s in Vienna 'Secession' style. 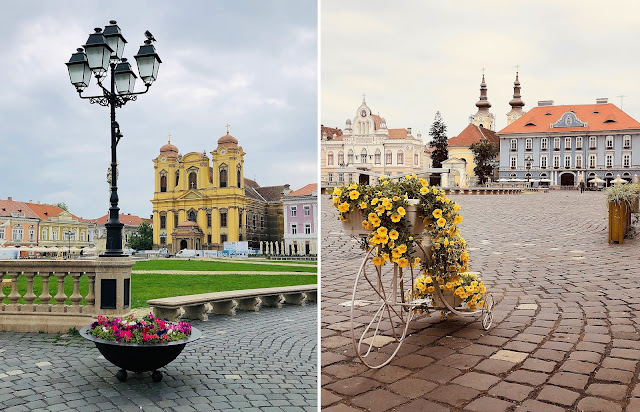 2. All photos by the author
Eastern Europe Romania Sibiu The Balkans Timisoara