Norway: The Land of the Midnight Sun

I arrived in Oslo, Norway late in the afternoon on solstice day, June 21st. Instead of giving in to jetlag, I joined our host for a walk to the harbor after dinner. The harbor was packed and lively with a street concert that featured pop performers like HRVY and screaming teenagers dancing to his music. I decided to stay at the concert and listen to a few more songs. It was still light when I returned to the hotel past 11:00pm and crashed out when I hit the bed. At around 4am I was woken up by bright lights peering through the window shades. Did I miss 24-hours of daylight? I wonder.

Like most people, my goal for visiting Norway was to see the UNESCO World Heritage Natural site Norwegian fjords.  And most international flights to Norway land in Oslo, so my itinerary included 48 hours to explore Oslo. Coincidentally, the city was hosting a pride parade the following day, Saturday and it was said that more than fifty thousand people were expected to attend the pride event. Our guide was afraid that a few roads would be closed off for the pride parade, so we set up early for our city tour. We saw the city landmarks like the Fortress, the Opera House, the Royal Palace, the Parliament Building, a medieval church, and the only remaining wooden building with hanging clothes (left as an art piece). 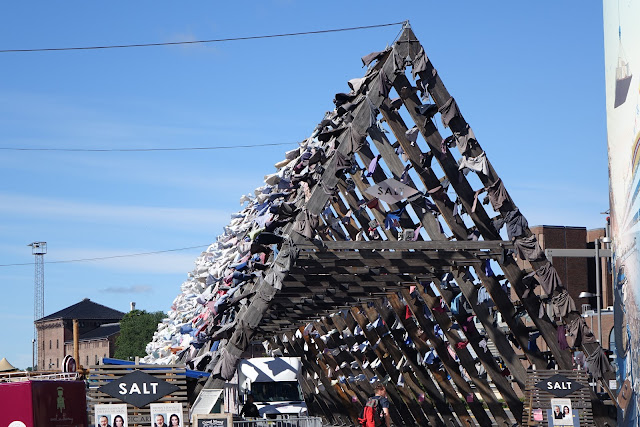 We then walked to the City Hall (Radhus), where there was a long line of visitors from the cruise ship. At first, I was not too happy at waiting in line just to get into a city hall. It was not until we were inside the hall that I realized why our guide took us there. Although it’s a functioning administrative building, it looked more like an art museum inside. The walls were decorated with frescoes depicting Norway’s and Oslo’s common workers and commerce between the war and during the occupation. There were also paintings of royals and saints. The city hall is the place for the Nobel Peace Prize ceremony that takes place on the 10th of December each year. 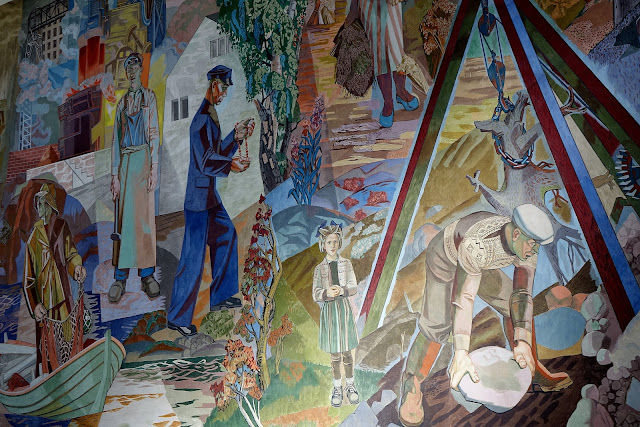 Our next stop was an open-air museum: the sculpture park and gardens with more than 200 sculptures done by a single artist, Gustav Vigeland.  The park was impressive in its interesting work of art. The main theme of Vigeland’s work was “the circle of life”, and all the sculptures in the park were naked, except for the statue of the sculptor himself.  The park has three major attractions:

1) The Monolith which was carved out of one enormous piece of granite with figures climbing in and around each other to the top. It was in the middle of a raised platform surrounded by different sculptures representing a different stage of life. 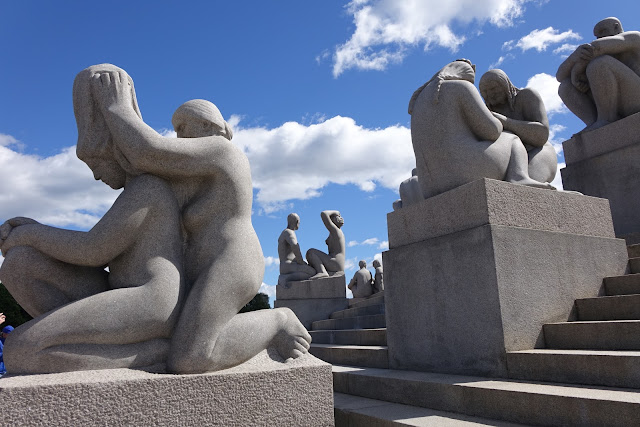 2)The Fountain was surrounded by 20 magnificent statues, each representing a different stage of human life. 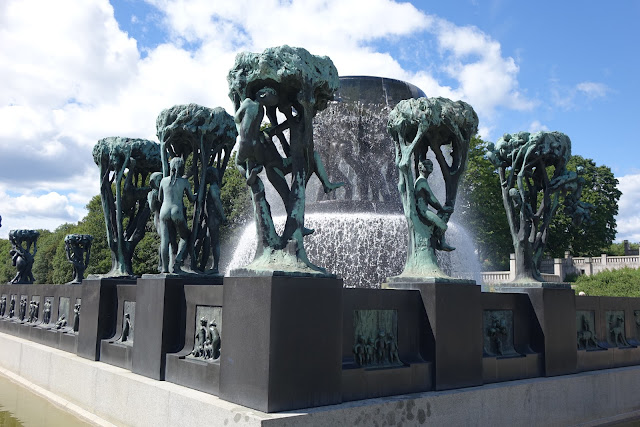 3) Sculptured figures set along the bridge. 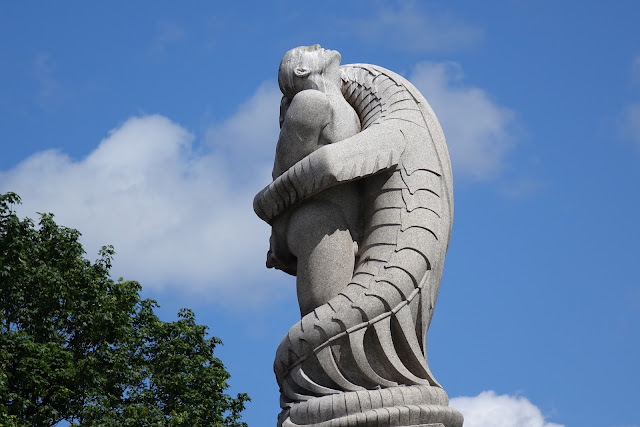 Next, we went on museum hopping in old-style wooden buildings located on the peninsula of Bygdøy. We first visited the Viking Museum and the Museum of Cultural History. It featured the archeological finds from Tune, Gokstad, Oseberg, said to be the world best preserved Viking ships. Then on to the Kon-Tiki Museum where I saw raft and maps from the Kon-Tiki expedition. At the Fram Museum, I saw and watched the story of Norwegian polar exploration.

After a day of art-gallery, open-air museum, sculpture garden, and museum hopping, I did not even notice that a pride parade supposedly attended by thousand and thousand of people happened. So, to regard Oslo as another big, boring city in Europe would be a tragic oversight.

I took a nap before dinner and went back to the harbor for dinner after 8:00pm. But it felt like it was 4 o’clock in the afternoon that I decided to take a walk before dinner. I went back to city hall and ended up taking pictures of the places that our guide showed us earlier. There was hardly any tourist in front of the City Hall, but there were few performers (musicians) in the park between the City Hall and the harbor. It was almost 9:30pm when I returned to the harbor to have dinner at the most famous seafood restaurant. It was still daylight when I left the restaurant that I decided to 'venture out' to the shopping area behind the waterfront. Passing along bars and comedy clubs, I had a glimpse of people enjoying a laugh or two at a comedy club. I stopped at the club to watch the comedian, but I could not understand what he was saying, so I left. I finished the night by taking pictures in the evening sunlight. Here’s a footage from my walk.

NOTES:
1. All photos and video by the author