I consider myself blessed by the many beautiful religious places I’ve seen in my life - the Vatican, Jerusalem, and the Wailing Wall, the temples in Kathmandu, the Hassan II Mosque in Morocco, the Blue Mosque in Turkey, Shwedagon Pagoda in Yangon and Bagan's more than 2000 temples, the Ling Yin Soul Retreat Temple in China - now there’s a new addition to the list: Rila Monastery and my new way of seeing things. When Turkish Airlines changed my connecting flights to Sofia, Bulgaria to a much earlier time that no one could not possibly make, I rebooked my flight to an earlier date.  It gave me a chance to explore the city on my own before joining a group tour to the Balkans.  I had another stroke of luck when out of the blue, I received an email from a travel buddy from my North African past two weeks before my trip.  She happened to live and teach at Sofia University, so she gave me a list of things to see and do in Bulgaria.

Another thing about travel is meeting people with the same interest as you.  I befriended an American from San Diego who seemed to have the same interest as me.  She happened to have some knowledge of the Cyrillic language, so she was a big help in deciphering some of the descriptions under the buildings and statues. and making the taxi driver understand where we wanted to go. She also had a big camera hanging around her neck. Together, we checked off the places on the list. The first place we explored was the Ivan Vazov National Theater and surrounding park area since it was close to our hotel.  Sofia had me at ‘Concierto de Aranjuez’ being played by a few old men in the park.  It was a beautiful day with the locals enjoying their weekend in the park: old men playing classical music, kids running around the fountain area, young parents with babies in the strollers, and old folks strolling in the park. But the most pleasant surprise was finding the Sofia City Art Gallery. There were sculptures outside the building and an exhibit of Vivian Maiers photographs inside for a minimal fee.  We continued walking around the city taking photographs of some interesting architecture and churches but did not go inside Alexander Nevsky Cathedral since it was part of the group’s itinerary.  Sadly, I was not able to see the “Crypt with the amazing icons” in the cathedral that my friend highly recommended because it was closed when the tour group visited the cathedral.

As my travel buddy said, she’s the least religious person, but she recommended that I visit the churches in Bulgaria. I was lucky enough to stay at a hotel in the city center and to have a room facing the Alexander Nevsky Cathedral.  So, I did not have to go out to take pictures of the Cathedral at night. I was able to capture in pictures the statue of Tsar Alexander II, the Parliament building and the Alexander Nevsky Cathedral at night, at dawn and in-between my jet-lagged self. 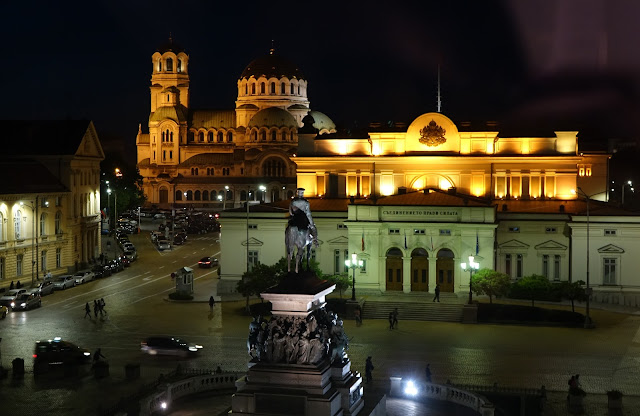 My new-found friend and I took a taxi to the Boyana Church in the outskirts of Sofia.  It was at the foot of the hill, surrounded by towering trees. After buying our entrance tickets, we were told that there was about an hour wait to go inside the church, so we asked the cab driver to wait longer. (A side note: the cab driver only charged us the equivalent of $2.00 for waiting). The church was very small that only nine people were allowed to go in at the same time, and for 10 minutes only.  Fortunately, we did not have to wait for an hour for we were asked to join a group of less than 8 with their special tour guide. Photography was not allowed inside and we were asked to leave our belongings as we entered the door. We entered a tiny Byzantine church surrounded by several layers of wall paintings depicting the life of Saint Nicholas, miracle at sea, and other religious figures. Basically, the highlight was the frescoes painted in 1259.

The UNESCO World Heritage site inscription posted outside states, “The church built in the 10th c. and enlarged in the 11th and 19th c has mural paintings from different periods.  The church owes its world fame mainly to its frescoes painted in 1259 which are considered as predecessors of European Renaissance.”

As a lover of art and nature, the highlight of my trip to Bulgaria was the visit to the Rila Monastery, located on the slopes of Rila, the highest Balkan Peninsula Mountain, in the valley of the Rilska River. The drive up there was simply amazing with the endless expanse of rolling green hills. For a brief moment, it made me forget the scenery of drab communist bloc apartment buildings we saw as we left the city of Sofia.  When our guide announced that we were about 10 minutes away from the Monastery, all I could think of was hiking those mountains, and I saw a hiking trail across the restaurant where we stopped for coffee, but I was on a group tour that hiking was not an option.

It was overcast when we arrived at the site.  The misty mountains, the art, and architecture were overwhelming that I didn't know where to focus my camera on.  Domes, colonnades, and archways striped in red, white and black. At the same time, I felt the need to listen to the guide’s narration so I could blog about the place. Rila Monastery was founded in the 10th century by the hermit St. Ivan of Rila who lived in a cave without material possessions not far from the monastery's location. The monastery is also known as a hideout of Bulgarian revolutionaries.

We spent a good amount of time at the main church, “the Nativity of the Virgin” that was covered inside and out by frescoes and lots of painting depicting Biblical stories about Adam and Eve, the Baptism of Jesus Christ, Judgement Day, etc. I then began to understand why it was included on the list of UNESCO World Heritage site. The monastery has been the hub of a strong spiritual and artistic influence over the Eastern Orthodox world in the 11th-14th centuries or during medieval times. and under the Ottoman rule (1400-1878) the monastery influenced the development of culture and arts of all Christian nations within the Ottoman Empire. 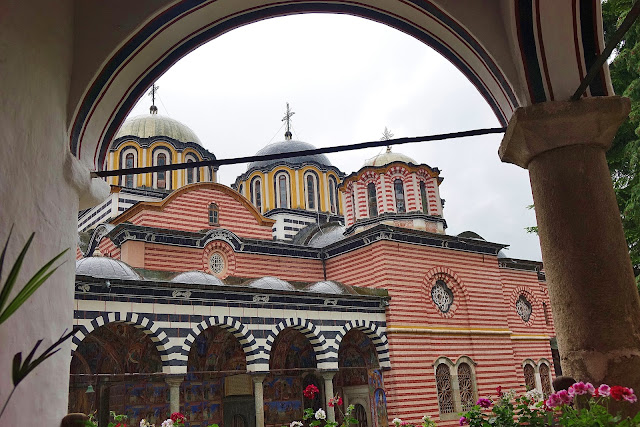 After taking gazillion photos of the church, the arches and frescoes, the rain started to pour, so we moved to the museum to see ancient artifacts, icons, wood carvings, and the famous cross created by Rafail.  It said that it took Rafail twelve years to finish the cross. It was amazing in its religious depiction in miniature and artistic details.

I was loving the downpour as we exited the museum. Although the lighting was not very good for taking pictures, it was a great opportunity for filming and taking pictures of such a popular tourist place without the people.  Besides, the sound of the pouring rain over the monastery, backdropped by the misty mountains made it look mystical.  And for me, everything that’s mystical brings joy, and joy brings peace... my religion.

Press play and enjoy the journey.

NOTE:
Videos and photos by the author