The Great Pyramid of Giza

Who said you can’t climb the Great Pyramid? Well, you can go inside the Great Pyramid and climb more than two hundred very narrow steps to see the spot where Khufu, the most powerful ruler of Egypt’s Old Kingdom, was interred for all eternity. I paid an extra 360 EGP for the experience or so I could claim I climbed the Great Pyramid. Seriously, I wanted to make the most of my visit to explore the last surviving wonder of the ancient world.

At 146.5 meters (481 feet), the Great Pyramid remained the tallest man-made structure in the world for nearly 4,000 years. Constructed between c. 2580–2560 BC, it was covered by limestone casing stones. It was impressive to see the beauty of the structure from the outside and to hear our guide talked about the astronomical and engineering principles behind the structure. For example, the sides of the pyramid are precisely aligned to the cardinal points of the compass. The triangular shape entrance, which is no longer accessible, was placed on the North side of the pyramid for an astrological reason.  They believed that the heavens revolved around a single point, close to the star in the constellation such as Ursa Major.

I entered the pyramid through the Robbers’ Tunnel, a tunnel created around 820 AD by Caliph al-Ma’muns.  I can understand why the tour guides don’t encourage visitors to go inside the pyramid. It has a forbidding interior – claustrophobic, dark, and very narrow ascending passages. It would not be easy to rescue a hyperventilating tourist trapped in the very cramped passages. Since I went on my own and had no guidance and reference as to the height and length of the passage, I started counting the steps. There were four sets of stairs: 11 steps of very hard stone from the entrance, bearing left I climbed 79 wooden steps, then it tapered to 20 more steps. At that point, I was running out of breath and feeling dehydrated. Sadly, I forgot to bring bottled water with me. I almost gave up and thought of going back while I had the chance to go back and use the steps on the other side when I heard, "You're almost here".  I looked up and saw the couple from our group and their eleven-year-old daughter encouraging me to continue. The last set of stairs was very steep and narrow. I counted another 104 steps.  Photography was not allowed inside the pyramid but when I got to the top/chamber, the guard volunteered to take my picture in front of the sarcophagus. I was fascinated by the natural light coming from small openings, so I took a quick snap of the dark chamber that contains the remains of Khufu’s sarcophagus. The huge granite sarcophagus was the only object in the chamber. 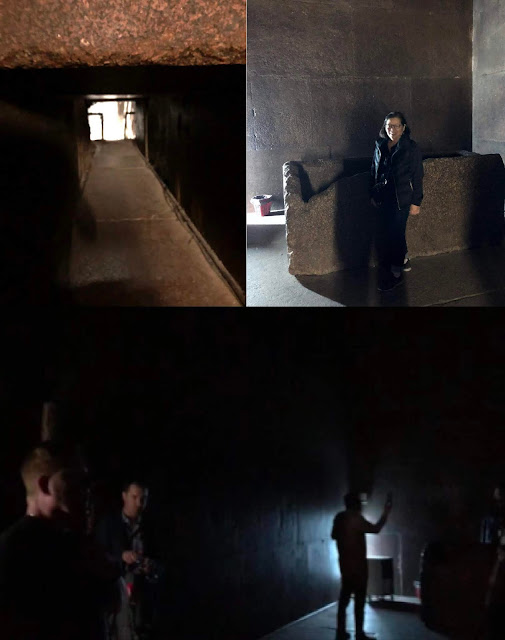 It was impressive to see that Khufu's burial chamber was covered or built from 2.3 million stone blocks, each weighing on an average of more than two tons. 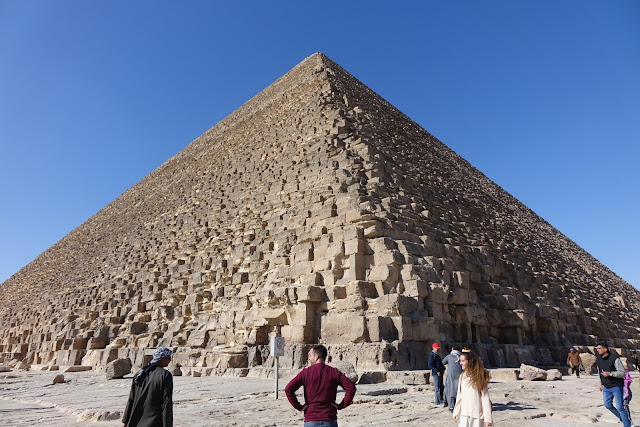 Except for the extra ticket needed to go inside the Great Pyramid (360EGP), all visitors need the Giza Plateau ticket (160EGP). The other pyramids surrounding the Great Pyramid is part of the landscape. After Khufu's death, his son Khafre (2558-2532 BCE) took the throne and began building his own pyramid next to his father's. Since he could not outdo his father and build a bigger pyramid, he had his pyramid encased and covered by granite instead of limestone. The king Menkaure (2532-2503 BCE) came after Khafre and followed the same principle of building his place of eternal rest. 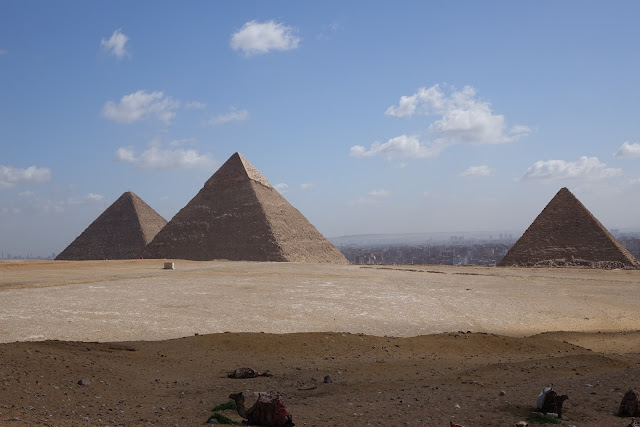 Khafre added his own temples and monuments such as the Sphinx of Giza. The Sphinx is carved out of limestone and has the facial feature of a man with a body of a reclining lion. It is approximately 73 meters (240 feet) long and 20 meters (66 feet) tall.

We went through the Valley Temple of Pharoah Djet to see the Sphinx.  The Valley Temple was constructed of huge granite and limestone blocks which are perfectly fitted together in jigsaw pattern that interlocks the block. We saw up close how blocks of granite were cut, numbered and fitted together.  For example, I counted the seven sides or angles created from one single block of granite.  It was amazing to see such engineering skills. 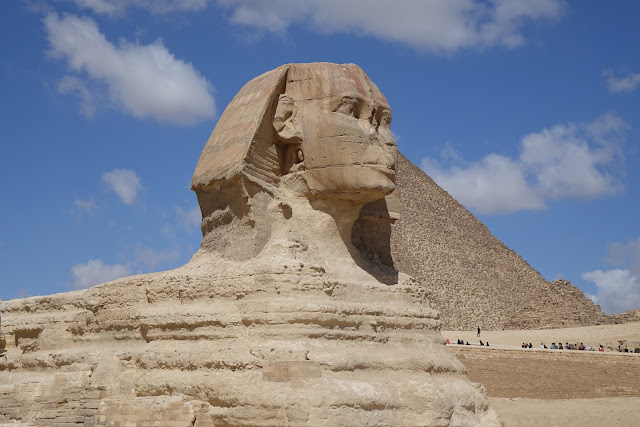 Almost every visitor to the Great Pyramid complex goes on a camel ride. Our guide took the whole group, but each one got her/his own camel. We all ride in a straight line, going slower and stopping to take pictures. It was more of a photo op rather than a romantic experience of riding a camel on top of desert dunes. Somehow, I got stuck with an ugly and the wildest camel, he could not keep still. The two kids/attendants responsible for holding the leash while I take pictures were more interested in taking my pictures and lobbying for a large tip.


NOTE:  All photos and video by the author.