The last two times I was in the Yucatan Peninsula, I visited some Mayan ruins but not Chichen Itza - one of the new seven wonders of the world.  Last month, I had the opportunity of visiting Chichen Itza while in Cozumel. So I looked into joining a tour to Chichen Itza from Cozumel, but the only tour available was a flight tour that cost almost $500.00.  It was not affordable for me so I left the tour desk disappointed.  But as I walked into an elevator, I overheard someone talked excitedly about his impending tour to Chichen Itza. So, I asked if he was going on a flight tour.

My immediate reaction was, “What? there’s a bus tour from Cozumel?”

Luckily, I was able to get on the same tour for a fraction of the price. Our day began with a forty-five-minute ferry ride to Playa del Carmen, and a two-hour bus ride (not really a big tour bus, but a van) from Playa del Carmen to Chichen Itza. As part of a small group, I did not have to deal with the entrance fees and long lines. Chichen Itza was a large pre-Columbian city built by the Mayan civilization. Today it’s a world heritage site and the most visited archeological site in Mexico. 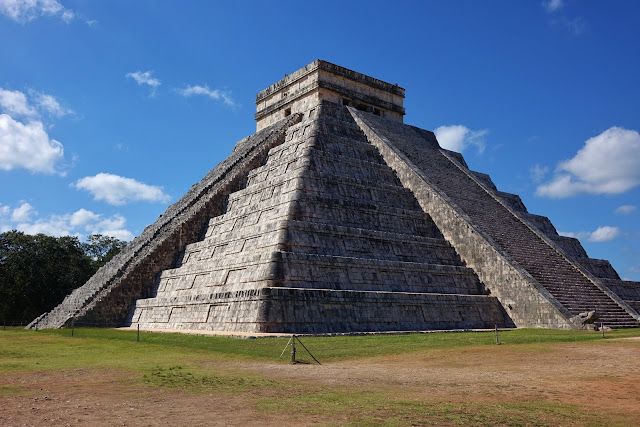 Past the entrance, there were many stalls selling souvenirs, but it's easy to ignore the hawkers when you’re about to see one of the places on your bucket list. We were greeted by probably the most iconic structure in Mexico – the pyramid called “El Castillo” or the Pyramid of Kukulkan. I’ve seen so many pictures of this pyramid, but as they say, “pictures never do justice”. The pyramid was a lot bigger than I envisioned. History has it that the pyramid was dedicated to Kukulkan, a feathered snake god similar to Quetzalcoatl. It was designed as a calendar. The four-sided pyramid has staircases on each face, each of which has 91 steps.  The 91 steps and the top platform combined, total the 365 days of the solar year. The number of months in the Mayan calendar is represented by the 18 terraces on each side of the stairways. There are 52 vertical panels perpendicular to the terraces that represent the 52-year cycle of the solar and Mayan religious calendars.

Of course, the first reaction in visiting such a place was to take photos of the most iconic structure, but our guide showed us the best spot for taking photos. The pyramid is aligned so that the spring or autumn equinoxes create an optical illusion. As the sun sets, the northwestern corner of the terraces cast a shadow on the northern stairway, creating a diamond pattern representing a snake’s body. The effect is enhanced by the huge snakeheads carved at the bottom of the stairs. I would have loved to visit during the winter solstice or summer solstice to be able to take dramatic photos, but the weather with the hanging white clouds and blue skies was a beautiful backdrop nonetheless. 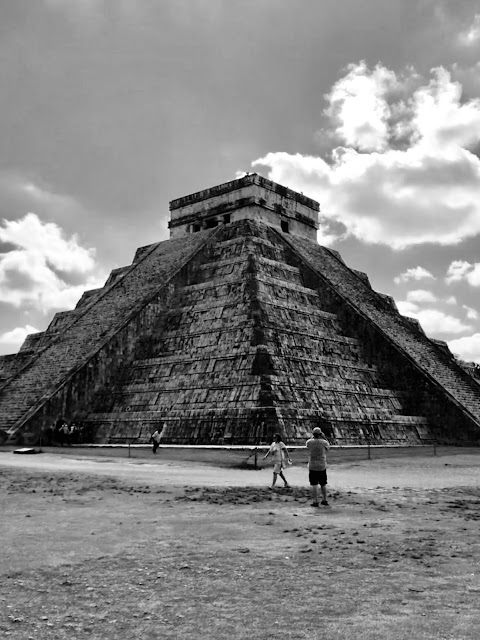 As one of the largest Mayan cities and had the most diverse population in the Mayan world, Chichen Itza has a variety of architectural style at the site. Here are some pictures:

The Temple of the Warriors is a large stepped pyramid that was named after the surrounding carved columns depicting warriors. 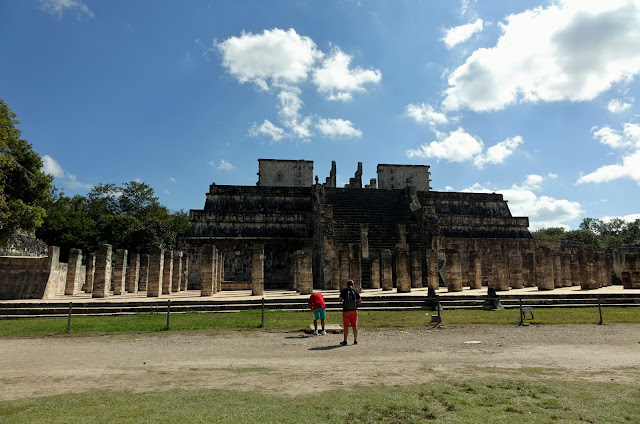 Buildings of 1000 Columns  It is believed that these were great meeting halls. Remains of the painted frieze indicate that it was decorated with motifs and Chaac masks representing an earlier priestly class who governed the city. 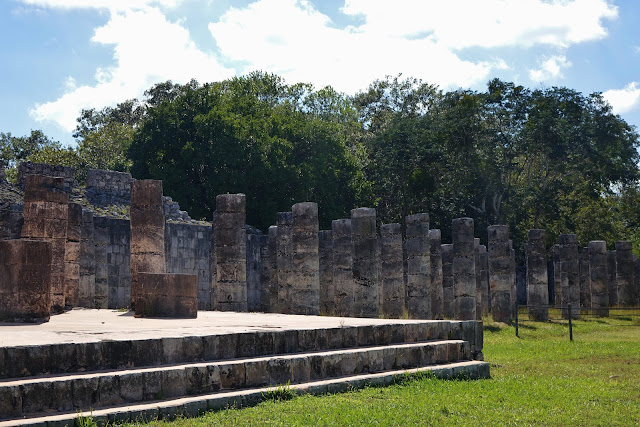 The platform of Venus  In the corner of one of its panels, there is a relief of Serpent Bird Man, which is considered to be the Quetzalcoatl-Kukulkan’s representation as the 'Morning Star'. 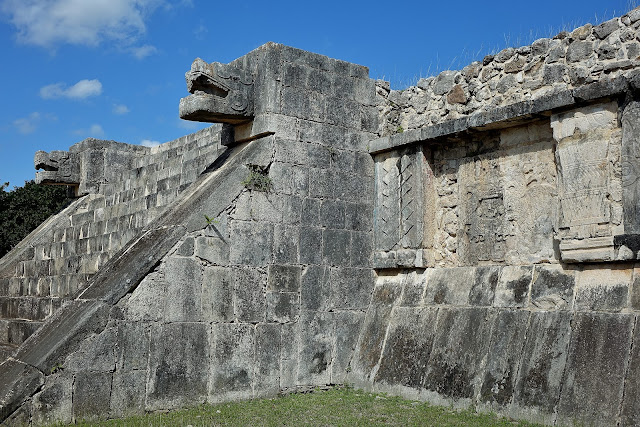 Towards the stairway, one can observe the matting, which symbolizes power, and in the corners can be seen what has been interpreted as the Knotting of the Years alongside the Venus planet. 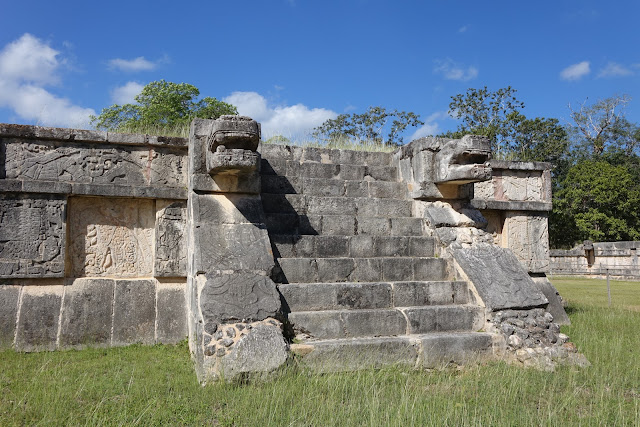 The Great Ball Court is 225 feet wide and 545 feet long overall. It has no vault, no discontinuity between the walls and is totally open to the blue sky. 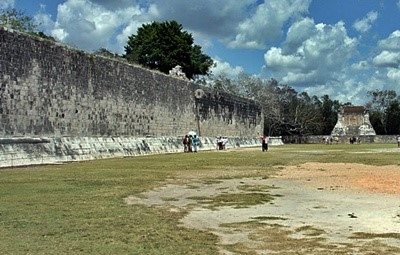 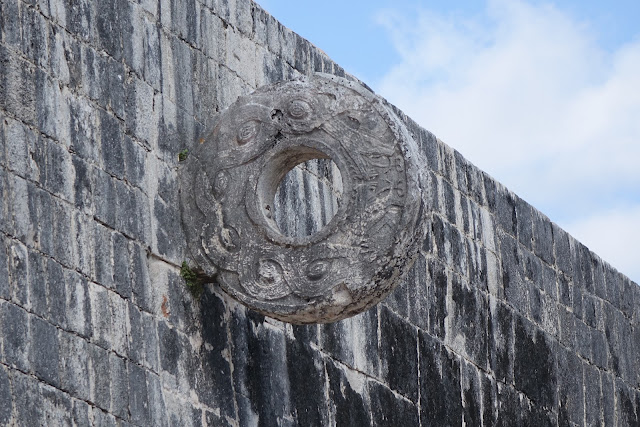