The Acadia National Park on the coast of Maine had been on my list of National Parks to visit. My original plan was just to hike, I did not plan on doing any other activities like kayaking or swimming, So I thought one day was enough to enjoy the park. However, Acadia National Park has more than 125 hiking trails and a variety of landscapes. People pretty much go to Acadia National Park to enjoy the landscape and the amazing views. I took a short hike and a scenic tour, soaking in the beautiful landscape that included shoreline, woods, lakes, ponds, and granite-domed mountain – the Cadillac mountain. 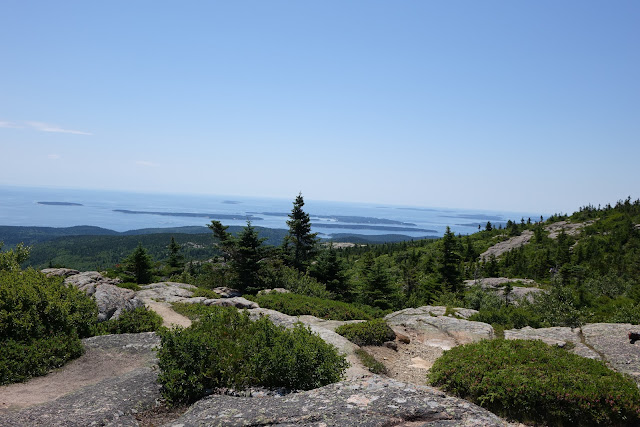 There were free shuttle buses to the park from Bar Harbor, a quintessential New England coastal town, sandwiched between the ocean and the mountains. I joined eight people on a 12-seater explorer bus. From the National Park entrance, the road climbed through a forested mountain, blanketed with green trees; maple, beech, jack pine, and other hardwood trees. Our driver pointed to the area that was ravaged by fire. The bus then took us along the ocean’s edge past Sand Beach and dropped us at the parking lot near the Schooner Head Overlook. I took a lovely two-hour hike along the shoreline. I did not make that much progress because I stopped a few times to take photos of the natural phenomenon like the ridges of granite rocks crafted by Mother Nature. 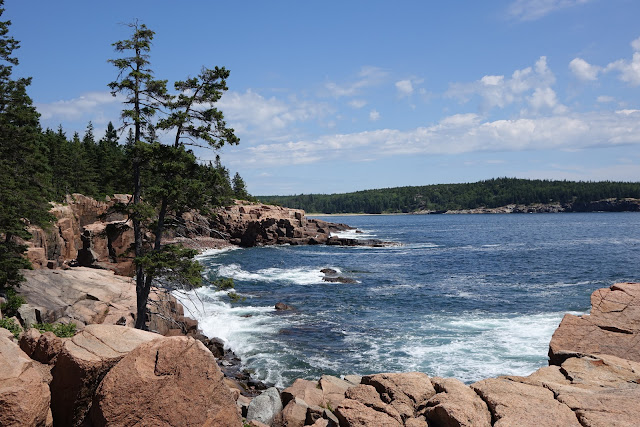 I hopped on the bus again to go to the Cadillac Mountain. On the way, we passed a wetland and stopped to see a newly formed beaver dam. I was more surprised to see waterlilies. I learned that all classes of wetlands are found within the park. More than half of Maine’s rare plants are found in wetland habitats, and at least one rare plant is found in each Acadia wetland type. They also provide a habitat for a wide range of species. 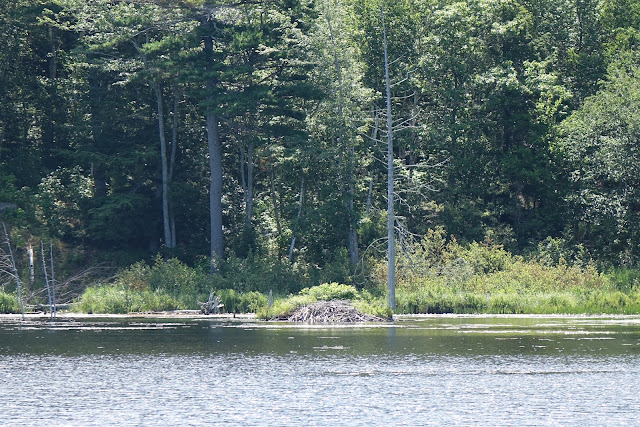 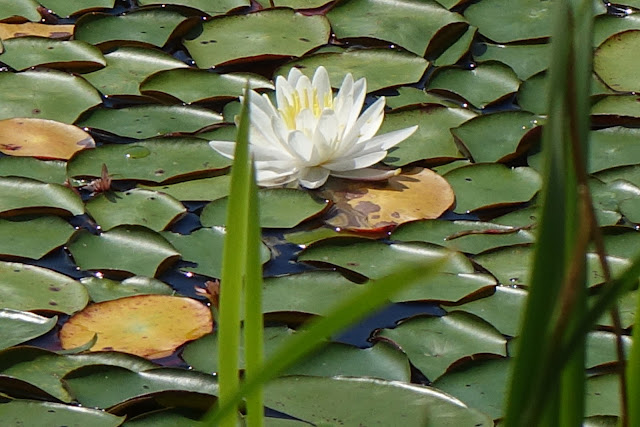 We were told to keep an eye out for moose, black bear, and white-tail deer as we travel through pine forests and past the Jordan Pond House with a beautiful view of the Penobscot Mountains and Bubbles Hill. I did not see any wildlife except for birds. Much of the time, I just enjoyed the peace and the beauty of the wilderness that surrounded us, especially the reflections in still water. 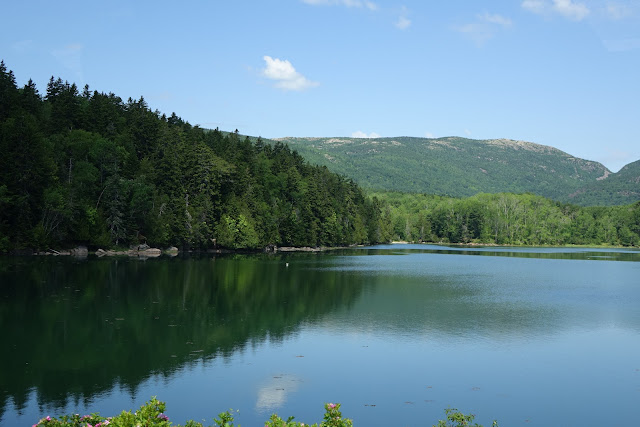 We were moving slowly along the Park Loop Road when our driver spotted a horse-drawn carriage. He said it was a rare sight to see. Apparently, there are rustic carriage roads in Acadia National Park, constructed by John D. Rockefeller between 1913 and 1940. I just saw the gate and the signage. I learned that Acadia National Park is the only National Park that is entirely made up of donated land.

Finally, we reached the Cadillac Mountain. At 1530 feet, Cadillac is the highest point along the North Atlantic seaboard. It’s said that the rising sun touches the slopes of Cadillac Mountain before any other place in the United States. It is one of the more than 20 mountains that rise from the sea and comprise much of the island on which a portion of Acadia National Park is located. These mountains inspired the explorer-navigator Samuel Champlain to name the island Isle des Monts Desert in 1604-the Island of Barren Mountains. 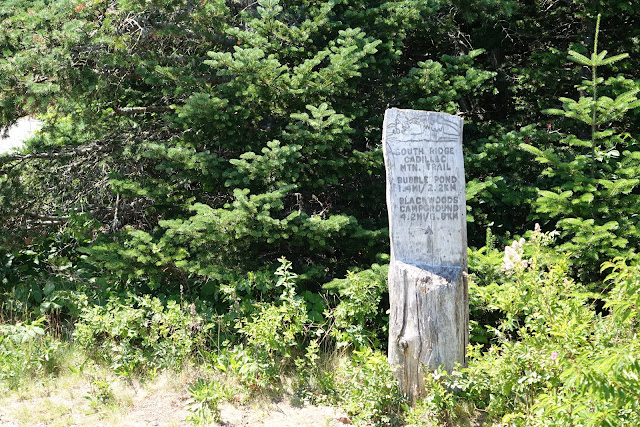 There were a couple of walking tracks which produced granite rocks upon granite rocks. Most people go directly to the summit. I took the walking track away from the crowd. It was interesting to see trees like spruce and pitch pine trees that grew between the rocks. I even saw a few berry shrubs. 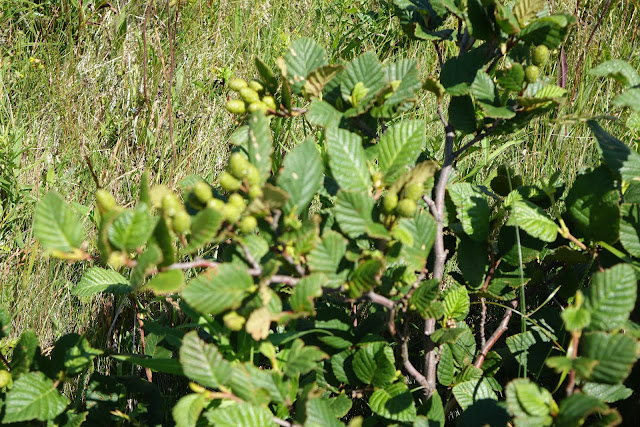 It was amazing to see the various sized boulders up-close, including the hanging boulder. There was so much to learn about the geological formations like the granites sculpted by glaciers that created the landscape I was seeing.  But I did not go there just to learn geology. 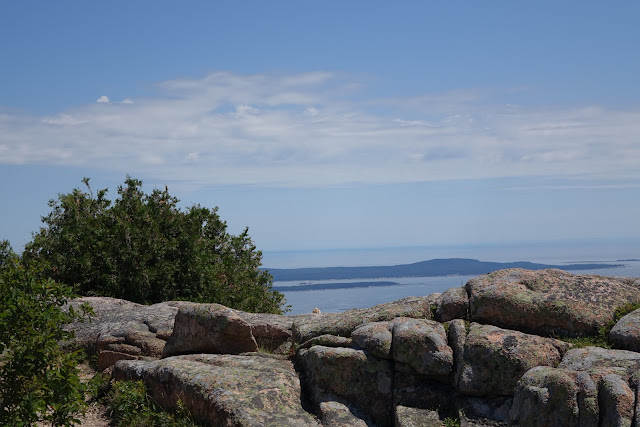 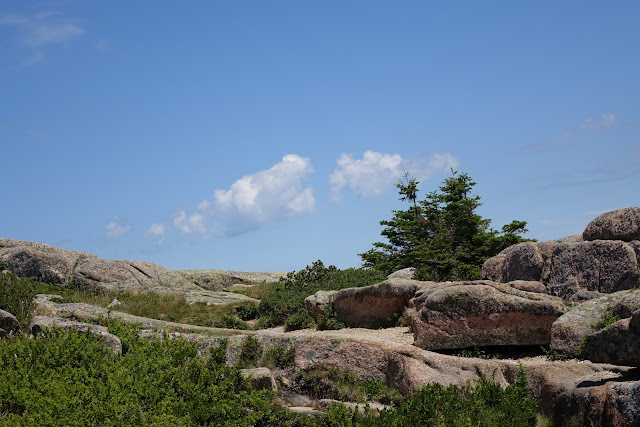 I worked my way up to the summit to soak in the beautiful weather and the 360-degree view of the forest, Atlantic Ocean, the Schoodic Peninsula, and other islands.  It was amazing to look down from on high. There I was, literally and figuratively on top of the world in 'seventh heaven'. 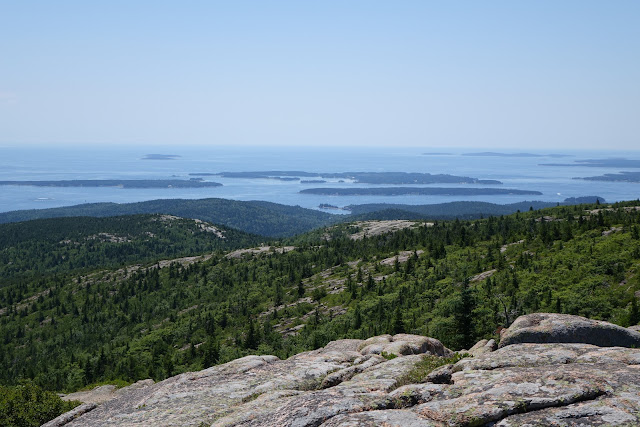