I have at last made it to Peggy’s Cove, a place that I always wanted to visit and photograph. Arguably, the most iconic site in Nova Scotia, Peggy’s Cove is a small picturesque fishing village with a population of less than fifty permanent residents. It’s forty kilometers away from Halifax, the provincial capital of Nova Scotia. It features a lighthouse that is perched on a granite rock formation overlooking the Atlantic rolling waves and said to be the most photographed lighthouse in Canada. As a photo enthusiast, I too came prepared with my camera.

We set off for Peggy's Cove early in the morning. Our guide told us about the history, rather the story of the place. One version of the story claims that when a schooner was shipwrecked in the area in the 1800’s, there was a sole survivor named Margaret. She married a fisherman from the area, settled in the village and thus became known as “Peggy of the Cove”. The present lighthouse was built in 1914 to replace the old original wooden structure from 1868. Our guide also warned us to take extra precaution when exploring the area and not go behind the lighthouse as visitors could be swept off the rocks by the raging waves, and that there had been at least one accident every year.

I was glad to hear the story and warning before we arrived so that by the time we got to Peggy's Cove, I was able to explore the area on my own and start taking pictures. I went straight to the lighthouse. The lighthouse itself was like a postcard that came to life. However, it was swarmed by hundreds of visitors scrambling off the tour buses trying to take a selfie. It was very challenging to take photos with all the people standing around taking pictures or a selfie in front of the lighthouse. I tried to time it when to take pictures without the crowd but the tour buses continued to arrive. 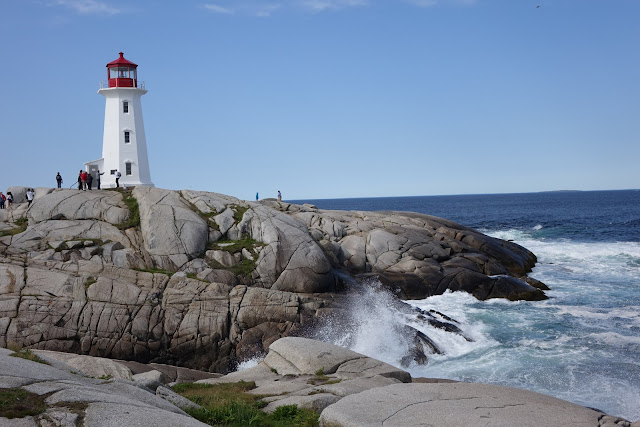 I tried to move around to take pictures of the lighthouse from a different perspective.  In the picture below, for example, I tried a 'forced perspective' technique (the bushes seem taller than they appear) to avoid taking pictures of the people climbing over the rocks around the lighthouse. However, leaving the granite rock formation out from the whole picture is like leaving out an integral part of the Peggy's Cove Lighthouse. 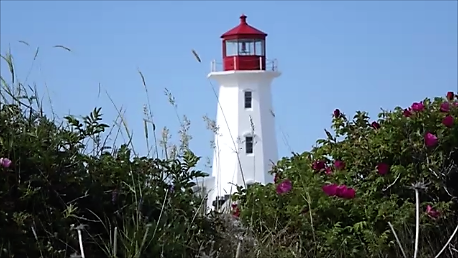 I was in front of an artisan craft store, which happens to be the oldest house (built in 1812) in St. Margaret’s Bay when I took this picture.

Disappointed that I was not able to take pictures of the lighthouse without the people, I wandered off and went down the fishing village and the cove. There I found absolute solitude. It was picturesque, but I did not find the cove as impressive as I expected. There were two brightly colored small boats floating in the small inlet fed by the Atlantic water.  The whole area looked like a movie set. 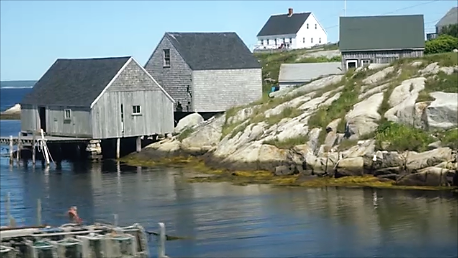 In my meandering, I found this sculpture in the rock. I learned later about the story behind the sculpture and the artist, William E deGarth, whom I had not heard of before. The sculpture is a monument to the Fishermen of Nova Scotia. It depicts thirty-two fishermen, their wives and children and the legendary “Peggy of the Cove” all wrapped in the wings of an angel. 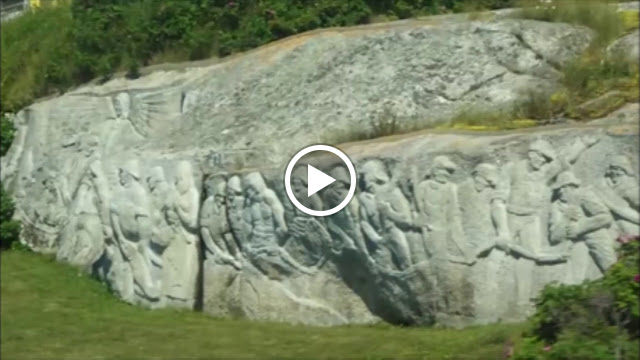 It was past 11:00 am when I returned to the lighthouse area.  I stopped inside a two-story building that houses a tiny art gallery/store, gift and souvenir shops, a visitor center, a restaurant and a coffee shop for coffee and to get my passport stamped.  After coffee, I went out and realized that the sun was shining brightly over the granite rocks and it was too bright for taking pictures.  I gave up on the idea of taking more pictures, I climbed over the rocks around the lighthouse and watched the waves break against the worn-out granite rocks, and hang around enough to admire the beauty of nature and the power of the sea and to understand how such a shipwreck could have happened at this location. 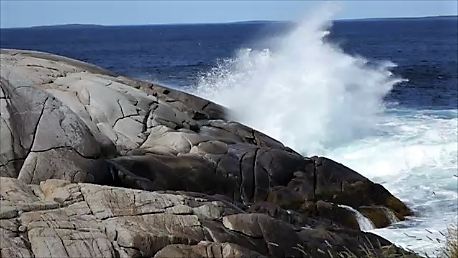 I raised my arms and looked up to thank the Almighty for the beautiful day when I noticed another photogenic scene - the white and red color of the lighthouse in contrast to the blueness of the sky. I could not help but take a photo for the last time. For whatever reason, the attraction of Peggy's Cove Lighthouse is evident by the busload of tourists taking a selfie in front of it. 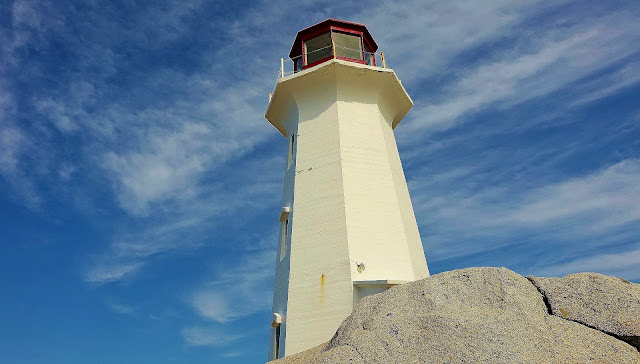