Lunenburg is a place that I hadn't really heard of until I reached Halifax.  Apparently, it's another iconic town in Nova Scotia and a UNESCO World Heritage Site - one of the only two urban sites in North America. It lies on the south shore of Nova Scotia, 60 miles from Halifax.

The coastal scenery and verdant landscape on the way to Lunenburg were pretty amazing.  Green pine Christmas trees covered the roadside. Our bus dropped us off by the harbor, in front of the Fisheries Museum of the Atlantic. So, the first order of business was to visit the Fisheries Museum of the Atlantic, which provides the backstory of the town and its hugely significant fishing and maritime history. Among the displays in the museum were tributes to the fishing community and the Mi’kmaq. There were also models of Lunenburg itself and the famous Bluenose. The Bluenose was not in port that day, but I gained a better understanding of what the big excitement about when I saw it in Sydney two days earlier.

Lunenburg is home to the Bluenose – a working fishing schooner launched in 1921. After a few months of launch, the vessel was entered in the International Fishermen’s Race and took home her first Fishermen’s Trophy and was undefeated for 17 years. It earned the title of “Queen of the North Atlantic”. It sank in the coast of Haiti. Despite the loss, the legacy lived on in the hearts of Canadians. Bluenose came to symbolize Nova Scotia's prominence in the fishing and shipbuilding industries. Its image can be found on the Canadian dime. In 1963, many of the same people who had worked on the original vessel at the same shipyard in Lunenburg launched Bluenose II, a replica of the original vessel. It continues to serve as Nova Scotia’s sailing ambassador.


I stopped briefly to view the Theresa E. Connor schooner and to enjoy the view and the beautiful day. 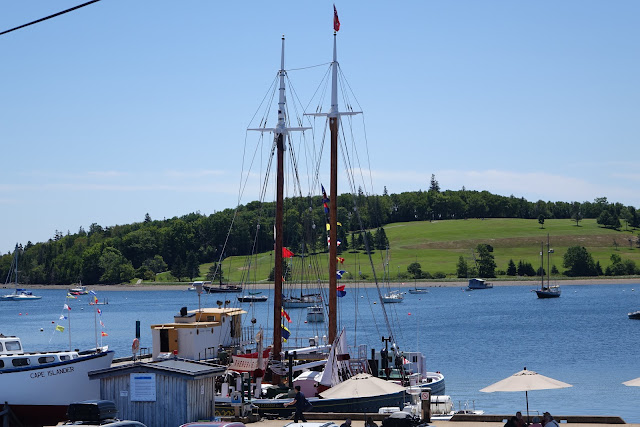 The balance of the day was spent exploring the area overlooking the harbor. It was lined with colorful storefronts and restaurants. I learned that Lunenburg kept its façade unchanged over the decades. Development that would spoil the town’s original character, like hotels, was prohibited. The historical buildings were marked as to when they were built, so it was easy to explore even without a tour guide. 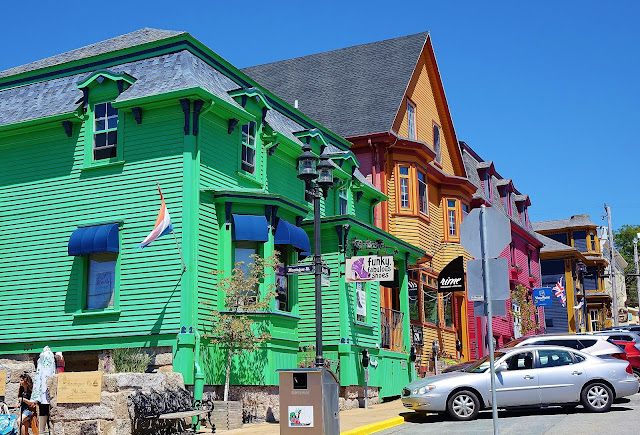 I walked further up the hill to the World War I memorial park and found a few typical white New England churches in the surrounding area. I found St. John Anglican Church the most interesting not only from the exterior, but the wooden interior from the pews to the ceiling. 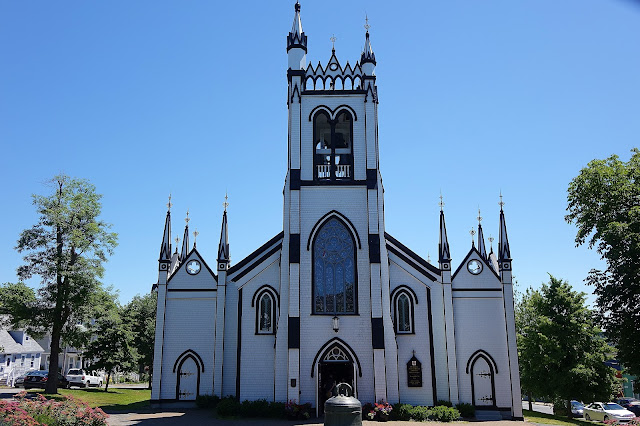 I was greeted by three young docents who gave me information about the church. The church was originally built in 1763 and the oldest church in Nova Scotia. The original building burned down in 2001 and was rebuilt and restored to its original form.

During the rebuilding, a painter discovered stars painted on the dome ceiling. An expert star man determined that it was Perseus, a well-known constellation and appeared to represent sunset before Christmas – as it would have been in Lunenburg on the day the Bible says Christ was born. Another interesting find inside the church was the colorful organ pipes on each side of the sanctuary. There was also a schedule of musical presentations posted by the doorway. I would have loved to attend and hear one of the organ music presentations.


Not far from Lunenburg was Mahone Bay, another iconic town. I did not have time to explore the town, just a quick coffee stop, and took pictures of the scenic bay and the three churches backdropped by white low-hanging clouds on the horizon. Talk about an idyllic landscape! 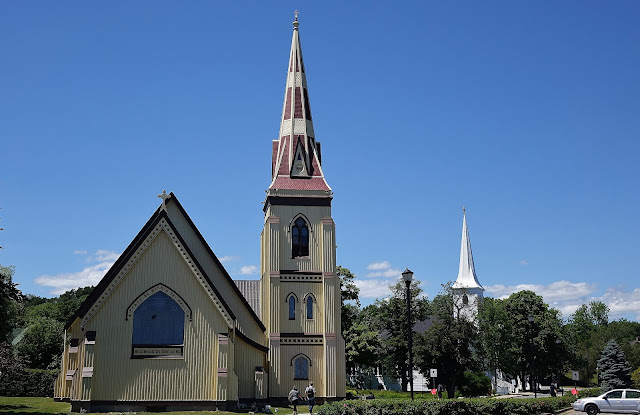