Palawan: It's More Fun In the Philippines

My trip to Palawan was not without its complications. The Philippines was not part of my Southeast Asia travel plans. But when I found a low fare to the Philippines, I decided to add the Philippines to my epic Southeast Asia 2018 trip. El Nido had been on my travel radar for a while. Since there's no airport in El Nido, I booked a flight from Manila to Puerto Princesa with Air Asia and a separate package tour through Asia Travel that included the transportation to El Nido and a hotel.  I also booked a hotel in Puerto Princesa through Booking.com. I pre-paid everything that was booked through Asia Travel.

The trip to El Nido from Puerto Princesa was long (6 hours), but not as bumpy as I expected.  The road was paved, winding with lush scenery. However, the stop to get food was far in between. We arrived in El Nido tired and hungry to find our pre-paid hotel room not only ready, but the hotel was fully booked. I could tell from the look on the hotel receptionist's face that there was an issue with my booking.  She was on the phone for a while trying to find us another accommodation.  We then agreed to transfer to another hotel (rather a family-owned dormitory). There was also a mess up with the transport back to Puerto Princesa, but when I called Asia Travel, I was told that everything was non-refundable. Minor setback?

When I visited Coron five years ago, I stayed at an island resort, so I did not see a lot of tourists except for the guests at the island resort. In contrast, El Nido is touristy.  But it’s hard not to fall in love with El Nido. Spending time exploring the jagged cliffs that jutted out of turquoise to emerald green waters and lagoons, kayaking and swimming in clear sparkling waters take the stress away. Many tour operators offer the same tour category such as Tour A - exploring different lagoons, Tour B - beach and island hopping and the combination of the two.  We opted for the combination tour on our first day and did our own beach hopping the following day.   We explored a few a lagoons from the small lagoon to the big lagoon, and the most popular one - the secret lagoon.  The Secret Lagoon has a very tiny entrance and relatively murky water that comes from the sea and fresh water from the island.  It is surrounded by towering limestone rock formations with natural carvings like the twelve apostles, eagle, crocodile, etc.

The following day, we hired a van to go to Nacpan Beach.  Getting to Nacpan was quite an adventure. The one hour ride from the town of El Nido to Nacpan Beach was very bumpy.  As soon as we arrived in Nacpan, we rented a cottage and enjoyed some beer.  The place was secluded and very quiet.  It was a perfect place to do nothing but enjoy the scenery - the beautiful stretch of cream-colored sand lined by swaying coconut trees and on the seaside, the view of smaller islands (someone mentioned that the bigger island of the three is owned by Manny Pacquiao). However, the different shades of the blue sea, the clear aqua waters enticed me to go swimming. 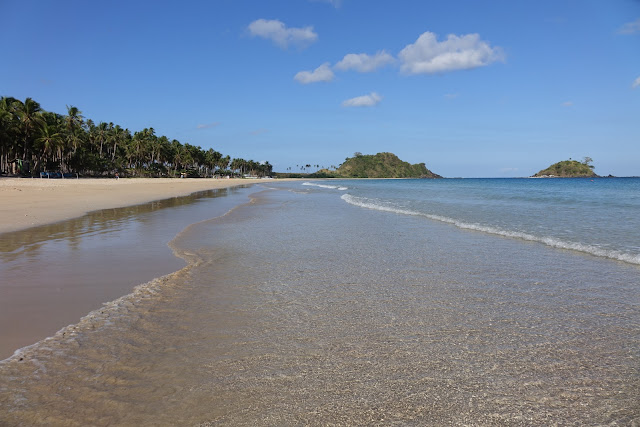 The Puerto Princesa Underground River is a UNESCO World Heritage Site and the most visited site in Palawan. So there's quite a wait to take a short boat ride to get to the entrance of the underground river and there's another wait to begin the underground river tour.  But it's all worth the wait. After seeing it with my own eyes, now understand why it's hailed as one of the Seven Wonders of Nature. Simply amazing. I highly recommend it as a 'must see' in Palawan.