Ecuador: The Land of the Volcanoes 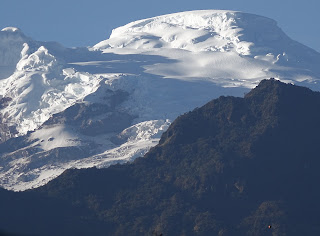 I did not have to scale mountains and volcanoes!  I was already at more than 9000 feet above sea level on most of the short hikes I did and the time I spent in Ecuador.

I arrived in Quito in the middle of the night and the ride to my hotel took about 40 minutes. After a few minutes of flat road, our van climbed higher and higher and the hotel seemed no closer. I was definitely feeling the altitude during the ride to the hotel, so I popped a pill (Diamox). I awoke in the wee hours and had to get up a few times to pee. I had chills and tingly hands and fingers. I thought I was going to have a stroke. I may not have suffered from altitude sickness, but I sure felt the side effects of the pill I took to prevent altitude sickness.

Our first day in Ecuador was an easy introduction, we went on an excursion outside Quito. We drove through a lovely road that wasn’t too steep to the Mindo Cloud Forest, where it had a few trails to a secondary forest and lookouts. We hiked to the lookout where we saw a thick forest, an introduction to the Andean Plateau, one of the world’s richest biodiversity hotspots with more than 25,000 plant species, and nearly 1600 birds’ species.

Of course, you can’t go to Ecuador and not visit the Middle of the World. The Middle of the World Monument (Ciudad Mitad del Mundo) park commemorates the site where the 18th-century French explorer Charles Marie de la Condamine once calculated the globe’s equatorial line to be. After a short walk in the park, I was out of breath, so I had to pop another altitude sickness pill.

After a short visit to the Middle of the World monument, we headed to Otavalo, a town famous for Otavalo Market run by Otaveleno Indians and one of the largest in South America. It was a scenic drive from Quito through the Guayllamamba valley and the north part of Cayambe valley. The views along the Pan-American Highway were amazing. It was like a never-ending drive at the top of the mountain 10,000 feet above sea level, looking over miles and miles of the canyons below. Just as we entered the province of Imbabura we were surrounded by volcanoes. Our guide continued to narrate the names and legends of the volcanoes. It’s hard to keep track of the names of the smaller volcanoes, but Otovalo was surrounded by the peaks of Imbabura, Cotacachi and Mojanda volcanoes.

We spent the night at Puerto Lago Resort. Although my room was facing the garden, I could see the peak of another volcano through my window. It was nice waking up to the fantastic early morning view of the volcano as the clouds breezed away.

The next day was another beautiful day and beautiful drive, passing small towns and stopping a short while at Cotacachi for a chance to buy leather goods. But I spent my time at the fruit market, trying different kinds of bananas and taking pictures of the old churches and the village in the shadow of the mountains. After lunch, we continued on a scenic drive through never-ending ascent and breathtaking scenery. I almost died a few times, not from shortness of breath, but as I stared at the glacier-covered peak volcano too long and whipped out my camera trying to film it, I was hit in the head by my camera. 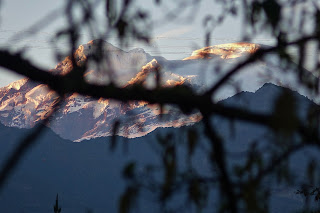 As we approached the most northern mountain pass, our guide announced that we would be spending the night at a crater. He was talking, of course, about the village of Papallacta where we spent the rest of the afternoon indulging in the hot thermal pools. I awoke to another clear day. From my bathroom window, I noticed the sunrise revealing the glacier in all its glory. I immediately went outside to take photos of the glacier and the stillness of the morning. It was incredible to get that close to the glacier.

The next day, our guide announced that it would be all downhill from Papallacta and just as I thought we’re done with volcanoes, the road skirted a river valley with the snow-capped volcano towering above. It was another fantastic drive. The area had some amazing views of the glacier-capped volcano and what made it unique was its proximity to the rainforest. We stopped at a lookout so many meters down. The glacier-capped volcano never left our site and was replaced only by the sight of the rainforest and the cloud forest as we neared the Amazonian basin.

Chasing volcanoes gave me just as much adrenaline rush as the strenuous hike and zip lining through the Amazon Rainforest. After Banos, we drove through the edge of the cliffs to get to our next hotel in Patate and woke up the following morning in the shadow of the steamy Tungurahua Volcano.
COTOPAXI (5897 meters, 19,347 feet)

AVENUE OF THE VOLCANOES
As we neared Quito, our guide announced that we’re passing the Avenue of the Volcanoes. Then he started naming volcanoes again like the Ruminahui Volcano. (4721m, 15,489ft)
PICHINCHA  (4784m, 15692 ft)
By the time I returned to Quito, I was already acclimated to the high altitude so that I could enjoy the walk at the historic masterpiece in the high Andes, the base of the Pichincha Volcano –one of the first places to receive the UNESCO World Heritage Site designation partly because of  architecture, the colonial religious art, the level of preservation and most importantly because of the natural environment.