In a country known as the land of the volcanoes with towering mountain peaks and deep plunging valleys, it was easy to find some waterfalls. I’ve been to Iguazu Falls, the largest waterfall system in the world, so I was not that excited about seeing waterfalls smaller than Iguazu Falls.  However, several waterfalls in Ecuador have trails, so 'chasing waterfalls' was a good excuse for me to hike on the valley floor than a hike on higher elevation or climbing mountains.

The first waterfall was quite small. On the way to the Mindo Cloud Forest, we stopped at El Pahuma Orchid Reserve, an ecological center, to see more than 200 species of orchids. As it turned out the orchids were not in bloom. The visit turned into a guided hike into a secondary forest (private land), a tropical rainforest with gorgeous waterfalls.  The walk to the waterfalls was short.  However, it was not easy navigating through the mossy forest floor and the short climb on wet and slippery pathways. Our guide mentioned that the water from the falls comes from the mist of the rainforest. 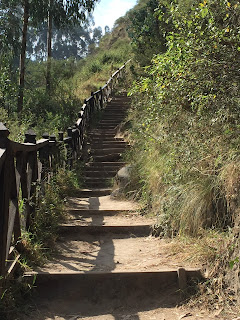 Another notable waterfall was the Peguche Waterfall in the Otavalo area. Situated in a protected forest that’s important to the Quichua community, it was quite a walk to get to the waterfall. The trail from the protected area entrance leading to the waterfall was literally paved in cobblestone. It was a very hard surface to walk on. As we reached the waterfall, the trail headed straight up the hill on one side, and a bridge for photo-ops and for viewing the waterfall. The bridge was connected to another trail on the other side and continued on an uphill trail that soon became stairs. The stairs then became very steep stairs, stretching higher and higher. It skirted off above the waterfall to connect to the other side. From the top of the trail above the waterfall, I could see small huts and a tepee by the riverside and what seemed to be an Indian village. I went back down and continued on the trail leading to the Indian village where I found a museum and store or a tiny fruit stand.

On the road from Papallacta to the Amazonian Basin, we passed and saw some gorgeous waterfalls and rushing rivers amid the tropical rainforest. The most notable waterfall along the route was the ‘Tres Marias’, a three-tier waterfall. The fall was so long and steep that I did not see where it last tumbled. As I focused my camera on the lush mountains, I saw more cascading waterfalls.

The drive through the “Waterfall Route” to Baños, a smallish community tucked in a beautiful valley alongside the Pastaza River and the mountains, was incredible. We drove through a very narrow road right along steep cliffs, lush mountains, and cascading waterfalls. We explored the most famous attraction in Baños: Pailón del Diablo or Cauldron of the Devil. I walked the path along the river to follow the course of the water that flows to Pailón del Diablo. I then shifted my focus on the Rainforest and the mountains above only to see water cascading from the mountain - smaller waterfalls.  I saw a suspension bridge below.  But I followed a few people along the route to the big waterfall and crossed the suspension bridge above the waterfall and took the steps down that soon became stairs to the second and third decks (viewing area) until I was almost underneath the waterfall, extremely close to the thundering rush of water. It was thrilling.