Johannesburg – the City of Gold

On a recent trip to South Africa, I joined a city tour of Johannesburg. We drove past the affluent neighborhood of Houghton to see the house where Nelson Mandela, the South African hero who fought against apartheid, died. We continued on to Soweto to visit  Mandela’s old house/museum and the Regina Mundi Catholic Church, one of the main centers of anti-apartheid activism in the 70’s in Soweto. When we arrived in Soweto, we got off the bus only to take pictures of the “Welcome to Soweto” sign but we were not allowed to wander around. I was disappointed but not totally surprised for before going to South Africa, I asked an acquaintance who was then living in Johannesburg if it was safe to visit South Africa.

Her reply, “It is easy to get a falsified feeling of security in SA but it’s dangerous!!! I suppose it depends on your comfort level, but one definitely does get a stressful feeling day and night about their safety…better to have guidance by a South African especially in the colorful and vibrant neighborhood of Hillbrow and Soweto, where curious people would not or just should not go.”

So, I could understand the tour operator’s concern over the tourists’ safety and for wanting to protect South Africa fastest growing tourism industry. Passing through the affluent neighborhood and the township’s shanty town, it was easy to discern the obvious – the wide gap between the rich and the poor. However, our time spent visiting Soweto and the Apartheid Museum was not enough to make me understand South Africa’s incredibly complex geopolitical history. The government sponsored racism of the past was truly beyond my comprehension. I could only attempt to break apart life’s complexity by asking simple questions like why could we not agree that the world doesn’t belong to any one person or race? That no one race is better than the other? That we who have much should share with those who have little? That together we are stronger? That love is stronger than hate? A utopian dream perhaps!

Nevertheless, the scenery of the shanty town we left behind in 'the'City of Gold' dampened my mood as we headed to the Mpumalanga Province. 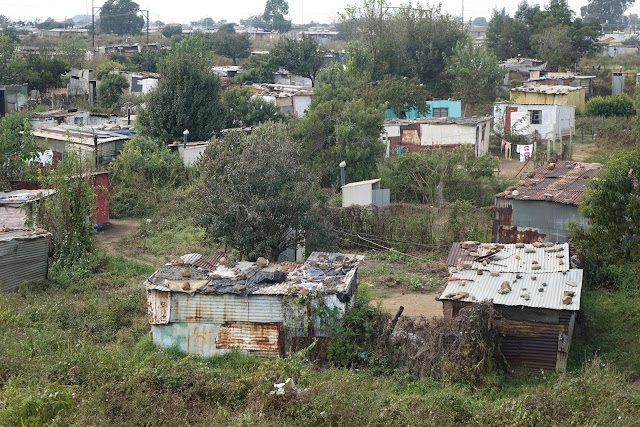 In my years of travel, I’ve seen the best and worst of humanity but mostly I’ve seen beauty in nature that takes my breath away. So, passing through an expansive landscape of green trees (acres and acres of planted trees for commercial use -- we were told) brightened my mood. I’ve been known to tear up at a sight of either a depressing scene or a beautiful sunset. The beauty of nature has long had a powerful grip on my heart. So, when we stopped at Blyde River Canyon I stood in awe at the edge of the cliff, breathing the cold air and taking in the beautiful landscape. Blyde River Canyon was different from the canyons I’ve seen in Arizona or Yellowstone National Park in that it was green. I was totally surprised because I was expecting to see arid lands in South Africa, but what I saw was a sea of greens and blues. 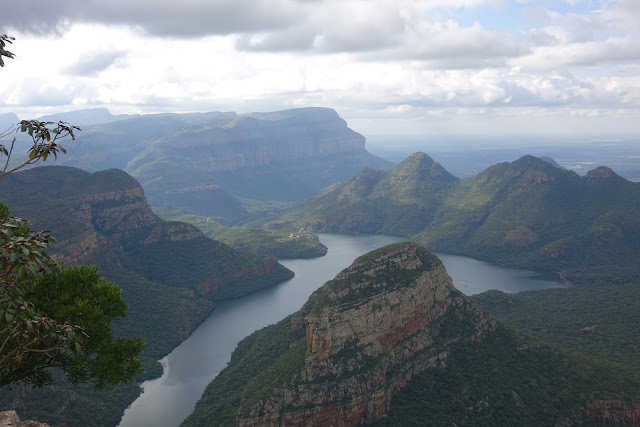 Two hours later, I found myself walking deep down heading to the waterfalls, but that was not the only scenic element in the group of Bourke's Luck Potholes natural wonder, a natural geological formation made up of inter-connected pools, colorful sandstone outcrops, gorge, river, and waterfalls. I ended at a pedestrian bridge on the right side to take pictures of the bridge on the other side and the gorge. Then I walked from one overlook to another to take pictures of the potholes and the gorge downstream and the waterfalls. 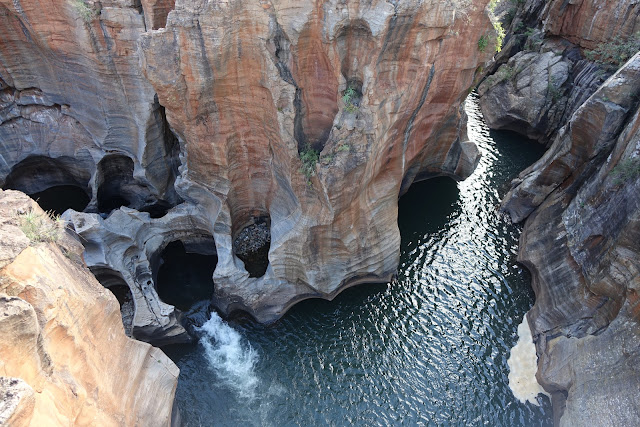 It was late in the afternoon when we stopped at a place called “God’s Window”. I stood at a vantage point and saw a stunning landscape filled with dramatic vibes both in the sky and earth. I was left befuddled by the beauty of the landscape and at a loss for words to describe it. I took a few shots using my 600mm camera lens, but it could not capture the magnificent landscape in the grips of an incredible transformation of the skies from blue to gray to the light of the setting sun as they bathed the sea of green and blues below. I could only admire the scenery with my own eyes and breath the cold air and surrender myself to the magnificent scenery. I thought it was called “God’s Window” for a reason.