Hluhluwe Game Reserve: In Search of the Lion

In Search of the Lion

I must confess that after having a remarkable safari experience at Kruger National Park, I was not as energetic to go on another safari. So, when I was introduced to our ranger/safari guide who looked more like a retired English professor than a ranger, I was totally fine. I thought the soft-spoken ranger matched my energy level at that point.

I was on a safari in Hluhluwe Game Reserve, the oldest game reserve in Africa. Located in the heart of Zululand, Hluhluwe’s topography is quite different from Kruger National Park. It is more hilly. It is home to the world’s largest white rhino population, an animal once on the verge of extinction, and also famous for the Big 5 (elephant, rhino, buffalo, leopard and lion).

We had barely reached the gate when we came across some warthogs. Then immediately after passing the gate we saw a brown zebra. Our ranger mentioned that the brown zebra was unique to Hluhluwe. Shortly after seeing a brown zebra, our ranger revved up the jeep’s engine and quickly drove uphill. Although he did not have the youthful look and physical stature of the ranger/guides we had in Kruger National Park, he drove that jeep like a teenager on steroid. It was not until we were heading downhill when he told us the reason why he was driving so fast. A lion was spotted by the watering hole. When we arrived at the scene, there were a few jeeps taking turns in finding a spot to get a better view of the lion. The lion barely moved. We lingered and took photos until it slowly moved away. To please the photographers in us, our ranger suddenly reversed the jeep, hitting a thorny plant behind me. We may have watched the lion from a safe distance, but I felt the sting of a sharp thorn that pierced through my cap.  The sting made me realized that I did not have to pinch myself to be sure that what I was seeing was real and not just a dream.  I wish I could adequately describe how incredible it was to see the feared animal's vulnerability.  Seeing the fresh wound from its leg through my camera lens, almost made me cry. 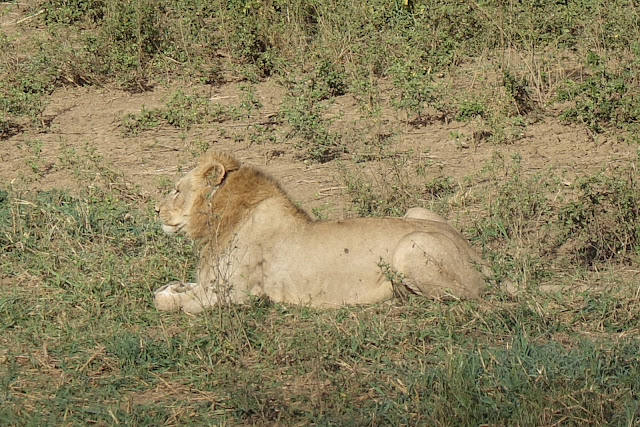 The weather was mild so we saw plenty of animals up close. We saw elephants, nyalas, buffalo crossing the road. We were treated to rhinos, giraffes moseying around nyalas (antelope unique to Zululand), and plenty of elephants up incredibly close. I did not realize that our jeep was totally open, until it rained a little and our ranger had to raise the windshield (watch the video below). Our ranger offered to drive us up to the very top of the hill so we could see the valley below and the beautiful landscape. The rain did not last, only to form a beautiful rainbow when we were at the very top of the mountain. It was a great privilege to witness such a spectacle of nature.

Towards the end of our safari, a herd of buffalo slowly trudged towards us, then came to a complete stop blocking our way. But it was a welcome sight since we saw birds with a yellow beak (oxpecker) on top of the buffalo’s back. Our guide said that we were seeing a display of animal symbiotic relationship: The birds feeding on the ticks, getting rid of the unwelcome parasites from the buffalo. 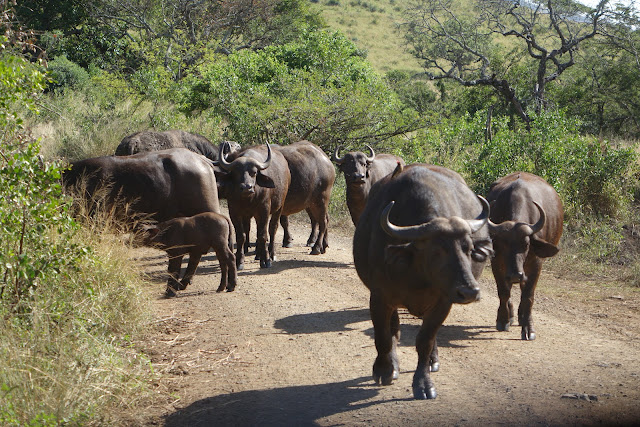 The held up also gave me a chance to take pictures of the lovely scenery. 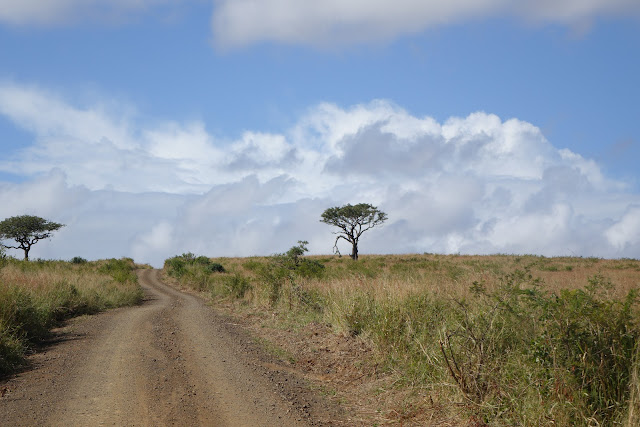