Dalmatian Coast and Zadar: A Tourist in Croatia, Part 2

We left Opatija the next morning early. Although I had not totally recovered from jet lag, the bus ride was exhilarating. It was a very scenic drive through a narrow highway. There was hardly any cars, but our tour bus zipping up and down mountain roads along the Dalmatian coast. We traveled for hours through stunning scenery of the mountains on one side and the Adriatic Sea dotted with islands on the other side. We reached a valley and stopped for coffee when we encountered a fierce wind. Our tour guide said that it was the Bura wind that usually last for two days and could cause road closure. It was a bit scary, but the fact that the road was still open for our bus to go through and to see the tornado wind on the sea  was a bit thrilling.


We stopped in the seaside town of Zadar. There was not much to see, but some traces of the Roman Empire and an old Roman Cathedral.
But I really enjoyed the natural setting of town in between an expanse of deep blue waters and the mountains, pretty clouds hanging over the mountains and the Adriatic Sea. 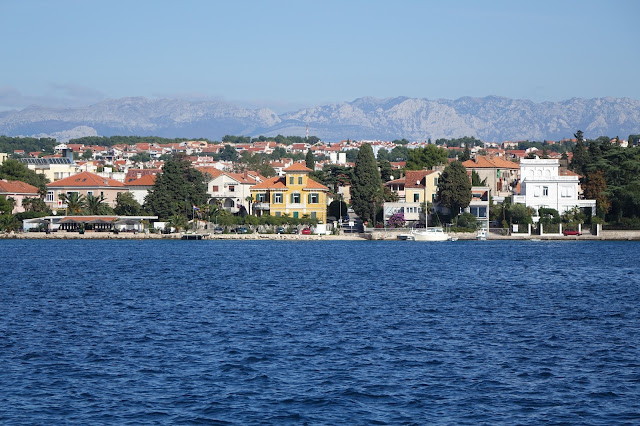 Another popular tourist attraction is the modern astronomical structure, "Greetings to the Sun" on the waterfront - a 300 multi-layered glass plates arranged in circle, encasing solar cells that absorbed sunlight during the day, and produced multi-colored light after sunset.  I spent a few hours hanging out there and talked to a boy who was fishing and showing off his catch. I enjoyed watching the boats go by and the view of the deep blue waters while listening to the sea organ.


We arrived in Split, the second largest city in Croatia, late in the afternoon and spent the night at the most modern hotel in the city. It was overlooking the sea, so we had a stunning view of sunset at sea. Our tour guide surprised us with a free dinner at a local restaurant by the hillside. I was skeptical about eating at a restaurant that caters to a busload of tourists, but our dinner of Croatian dishes was great. The highlight was an octopus salad, grilled sea bass and some sort of cooked greens, and great wine, totally Mediterranean. The whole group got to know each other through food, dance and music.