Twenty-one missions were established between the period 1769-1833, near the California coast along the El Camino Real (King’s Highway) extending 650 miles. I joined our local church in visiting six of the 21 mission churches last weekend. Not only a religious tour, but I also learned so much about California history – the Old World (Spain) attempts at colonization, the Pacific connection between Central America, Philippines and Mexico and Alta California.

Common to the mission church ground is the statue of Junipero Serra, a Franciscan priest who led the way (founded nine missions) including his headquarters, the Mission San Carlos Borromeo at Carmel. We heard stories about this soon to be sainted Blessed Junipero Serra: Apostle of California.  Another common feature of the mission churches is the architecture that includes adobe walls, tile roofs, long and curved corridors, patio and gardens. Exposed wood beams, and flowers and the river of life motif painting in pastel colors are common elements of the church interior.  Another unique feature is the altar. The emphasis is not on Jesus's crucifix, but the patron saint (usually women) as the centerpiece of the altar.

#1. Mission Soledad
We first visited Mission Soledad, said to be the least visited of the 21 missions.  We walked the grounds and saw the unique archaeological ruins of the old mission complex. We then headed inside the mission church for the morning prayers and admired the church interior painted in pastel colors with flowers and river of life motif, with exposed wood beams, and Barcelona-style chandeliers.

#2. Mission San Luis Obispo
Our next stop was the mission and Pro-Cathedral San Luis Obispo. It’s one of the oldest missions, founded in 1772.  The most significant devotional art is in an alcove on the right hand side of the church, with an illuminated painting of Our Lady of Refuge. The alcove was once the entrance to the funerary chapel, which led out onto the mission cemetery. 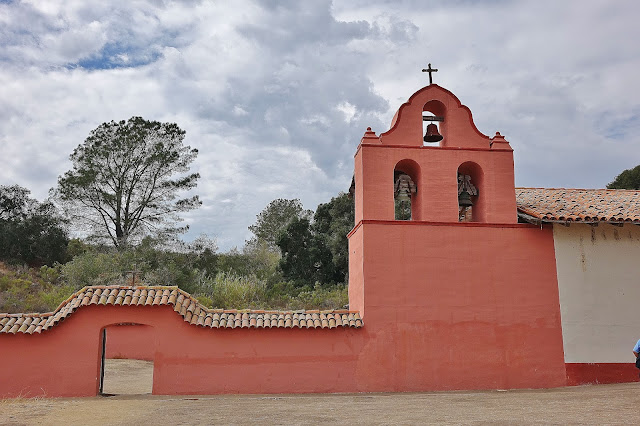 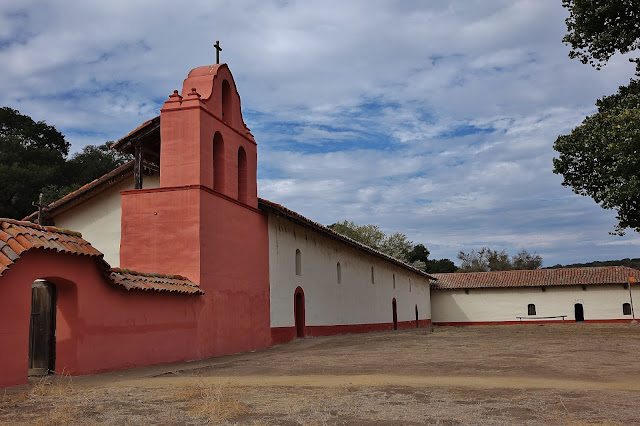 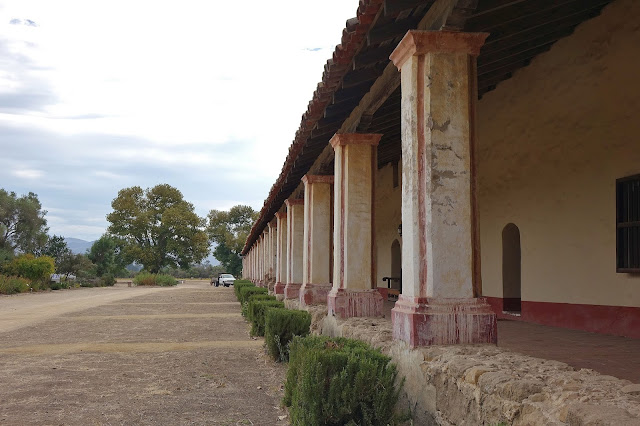 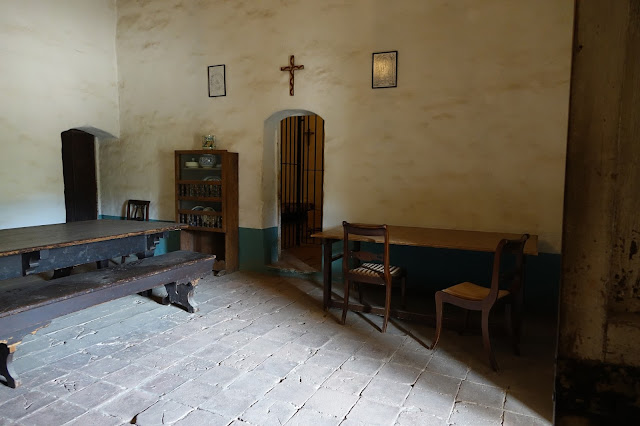 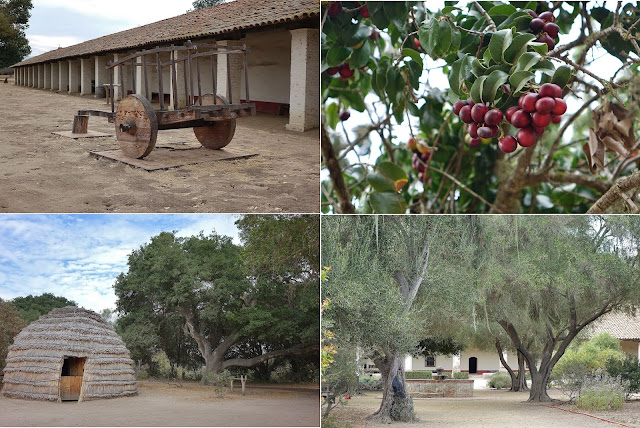 #4. Mission Santa Inez
Mission Santa Inez is located in the tourist village of Solvang, one of the most beautiful villages in Central Coast California. Built in 1817, the mission church facade is plain, typical of a mission church. I was not able to take pictures inside the church because of the on-going Sunday masses. But the interior is embellished with floral motifs along the whole length of the church. The garden is very green with mature fruit trees. 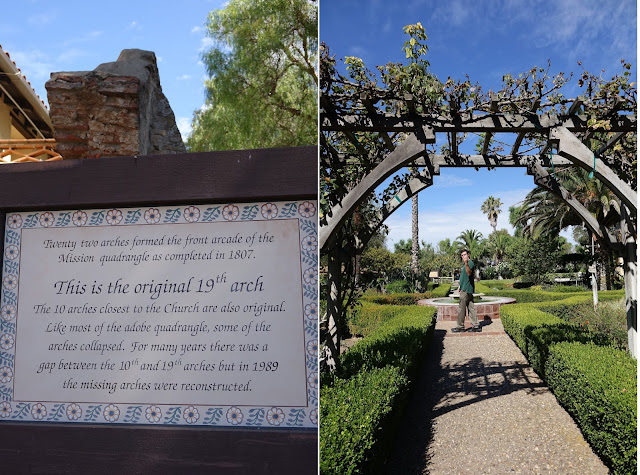 The mission museum displays the bells of 1804, 1808 and 1818 and an extensive collection of church vestments including a Chasuble worn by Fr. Junipero Serra and a 17th century cape crafted in materials from the Court of Louis XIV of France. There are also a few paintings on canvas. 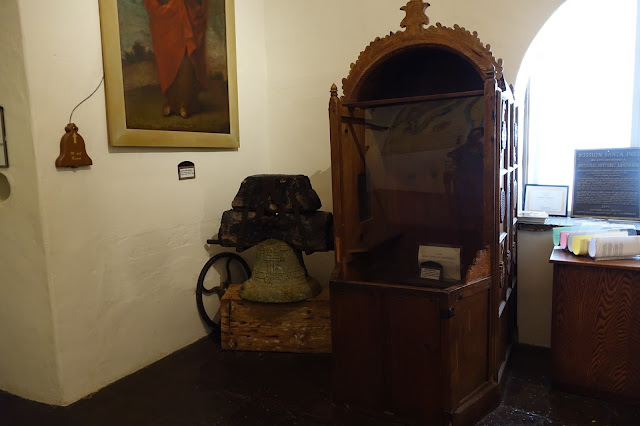 #5. Old Mission San Miguel ArcAngel
Mission San Miguel was our 5th stop. Here we toured the grounds and the interesting museum and admired the church interior with the best preserved original Indian painted murals and art that adorn that church. 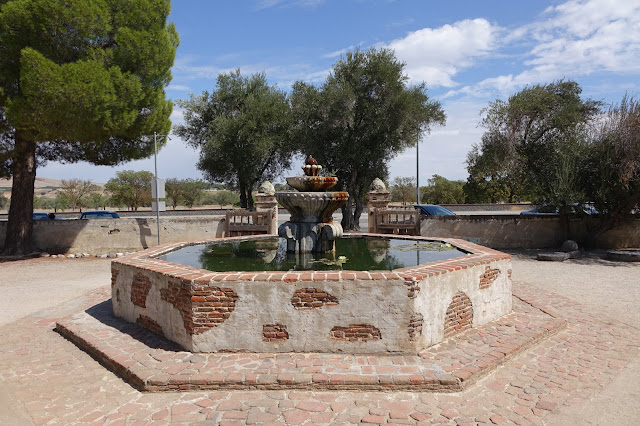 #6. Mission Santa Clara
Our last stop was Mission Santa Clara where we visited the historic chapel started by the Blessed Junipero Serra. Run by the Jesuits of Santa Clara University, the mission retains the mission style architecture, but the interior of the church looks rich and gilded (goes to show how much a $40K tuition could do). A lesson in history indeed!

The beautiful weather, spectacular play of clouds in the sky, sunrise and sunsets and even a rainbow, turned this short trip to the mission churches in California into a true spiritual journey.