NEPAL: Durbar Square Before the Earthquake

- May 12, 2015
I was writing my blog about Nepal’s UNESCO World Heritage and historic sites very late last night (05-12-15 in Nepal) when I happened to check my Instagram and saw a posting about Kathmandu after a 7.4 magnitude earthquake hit Nepal yet again. I get emotional just by looking at the photos and videos I took from my recent trip to Nepal let alone a video of a chaotic Kathmandu.

I must confess to telling a co-traveler on our way to Patan's Durbar Square that I was ‘templed out’ (the term I used to describe how I felt after visiting so many temples).  Who would have thought that the visit to that last Durbar Square and seeing all the temples that day was a great blessing.  I have said many prayers of gratitude for the opportunity to see and capture in films and photos Nepal’s UNESCO World Heritage sites and the irreplaceable temples and statues before the April 25, 2015 earthquake.

The Kathmandu Valley is comprised of three cities: Kathmandu, Bhaktapur and Patan. Each city features a “Durbar Square”, a plaza with a concentrated collection of old architecture, temples and an old royal palace or a government building, which in recent times used as a museum or an art gallery.

We first visited Bhaktapur, a city that had the appearance of a medieval town with very narrow streets that our mini-tour bus had to drop us off at the edge of town. We walked through very narrow streets to reach the town center and Durbar Square. Our guide asked us to first focus our attention to the imposing temple dedicated to the goddess Siddhi Lakshmi at Durbar Square. The temple’s stairway was lined with stone sculptures of animals like rhinos and elephants as temple guardians. It’s said to be the tallest temple in the Kathmandu valley and due to its robust construction, it stood the great earthquake of 1934. There was a cluster of temples dedicated to the gods and goddesses Vishnu, Ganesh and Durga, etc. with gorgeous woodcarvings. Facing the temples was a white building that used to be a government building, now a National Art Gallery.


Of the three Durbar Squares, Kathmandu’s was the busiest. It was hard taking pictures of the temples without the people. So, instead of taking photos, I concentrated more on observing the architectural elements of the place, like the intricate woodcarvings. The designs are quiet interesting where I saw erotic scenes carved into the ceilings. A pagoda style temple towered over the square. Our guide said that it was the tallest building in town. We visited the designated UNESCO World Heritage site, Hanuman Dhoka, the ancient palace of Nepalese Royalty, and stopped at the Temple of Kumari, hoping to see Nepal’s most important living goddess, looking out the window. We did not see her, but saw the beautiful windows and wood carvings from the courtyard. I guess the memorial to Kal Bharav, the Hindu God of destruction was the most popular. Perhaps it was the colorful stone carved statue that attracted the crowd for I saw many people taking photos of it. We then visited the most important temple to the Hindus, the magnificent temple of the Goddess Taleju. 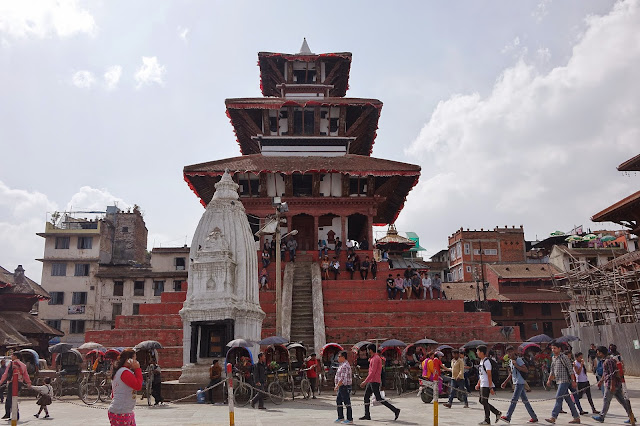 
Our last day in the valley was dedicated to Patan, home of another kingdom in the valley. It was a short drive from Kathmandu. We passed a busy commercial area with a continuous row of stores and street vendors selling anything and everything from exotic fruits to live animals (chicks). We had to walk through narrow streets before reaching the Durbar Square. Our guide took us to the 2nd floor of another temple or public building where we were able to view and take panoramic pictures of the most imposing pagoda followed by a row of magnificent temples, one after another. It was incredible. When one of my tour mates asked our guide if they were temples, our guide was probably tired from naming all the temples that he just said, “Temple, temple, temple, temple…they’re all temples”. We then went to see the temples up-close and saw the doorways, windows and ceiling covered with gorgeous woodcarvings. Patan was very special to me since I felt the religious presence there and the warmth and friendliness of the Nepalese people at that point. I then began to understand why it’s called “The City of Beauty”.

Reports showed that most of the temples in Patan Durbar Square were reduced to rubble. 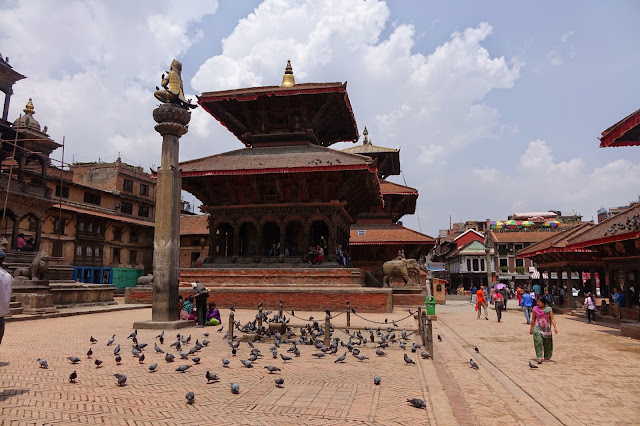 Click  HERE Dunbar Square UNESCO WHC and Historic sites to watch the video on You Tube or click the thumbnail below.