We drove out of the city to Amer. Within minutes, we found ourselves in an utterly different world, an imposing fortress above a lake. Our guide gave us a little bit of history of the Fort: It was built in the 16th century by Raja Shri Man Singh I, one of the first war chief and trusted general of the Emperor Akbar. We stopped at a lakeside so we could take photos of the whole fortress. The view was incredible. It felt as if we were on the page of a Kublai Khan book from the thirteenth century, except that when we reached the foot of the hill where we were to set off for an elephant ride to the fortress, it became very touristy with vendors selling mahout hats and souvenirs. 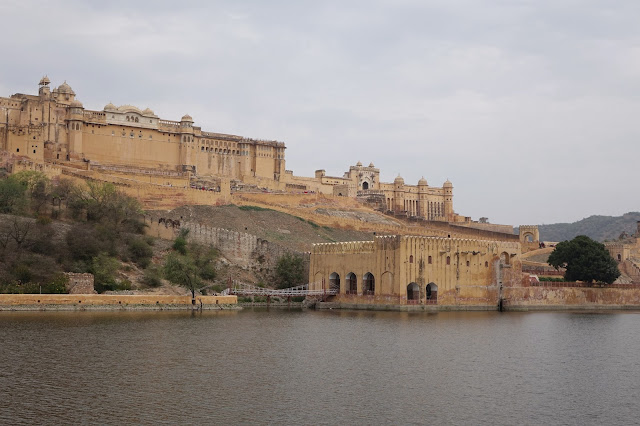 We rode the decorated elephants to the top of the hill over a majestic and awe-inspiring landscape (a beautiful garden in the middle of the lake). Our elephant slowly trudged up the hill passing through the arches and so close to the ramparts. Leaving the touts and souvenir vendors at the foot of the hill, I started to feel the history of the place again, except as we approached the top, a bunch of photographers started taking our pictures without asking. 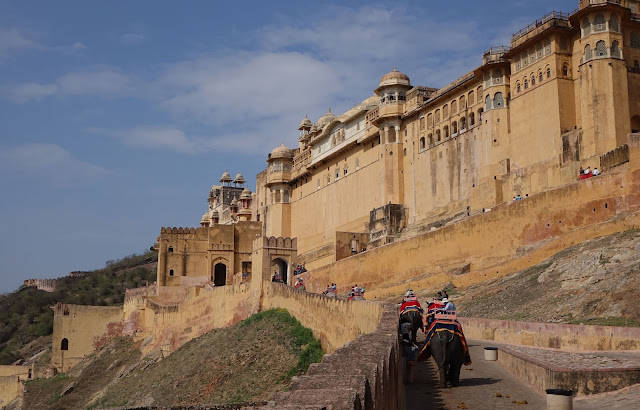 Our local guide was waiting for us at the expansive courtyard or plaza at the top of the hill. We went two levels above the plaza/courtyard where we walked in to a colorful facade. The palace facade was striking. On the opposite side and east side were the astonishing views of the great walls and the mountains. Then our local guide walked and talked us through the gates, palaces and courtyards.

The colorful facade is called the Ganesh Pol - a three-level structure with many frescoes that was also built at the orders of the Mirza Raja Jai Singh in the 16th century. It is the entry into the private palaces of the Maharajas. Above the gate is the Suhag Mandir where the royal ladies used to watch functions held in the Diwan-i-Am through latticed windows. 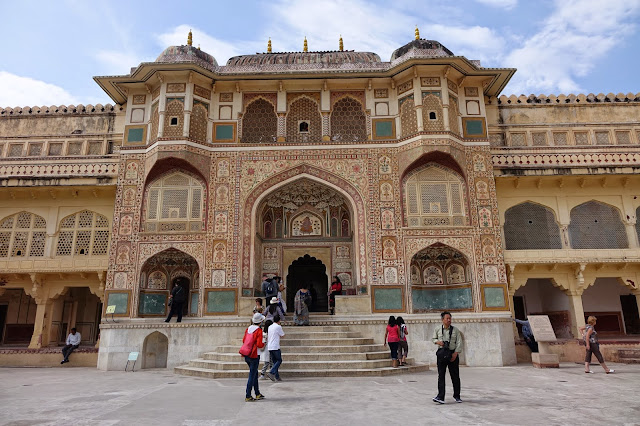 Diwan-e-Aam or the “Hall of Public Audience” is a fusion of Islamic and Hindu architecture. The roof has a straight-line effect while the ceiling inside is a dome shape.

Sheesh Mahal has walls and ceilings, carved with beautiful paintings and flowers made with pure glass. The stunning thing about the halls of Sheesh Mahal is that if someone lights a candle, the reflection converts the light into thousands of stars.

In between the Sheesh Mahal and Sukh Niwas palace is the Mughal garden, which has been built in Mughal style.

The fourth courtyard was where the Royal family women, including concubines and mistresses lived. In the center of the courtyard is the “Baradari” or a pavilion. On the far side is a big underground water tank, which supplies water to the many rooms. 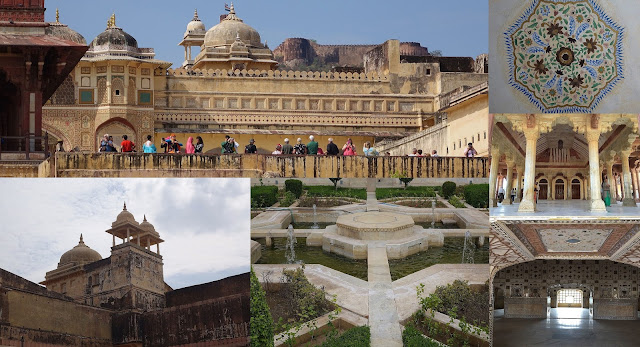 Our tour of Amber Fort ended after a visit to the underground water tank. I was walking through the wide passageway heading to the staircase to catch a jeep to our tour bus parking lot when suddenly one of the photographers stopped me in my track to sell the photos of me that he took – four photos for five dollars. I was not interested in my photos, but the photographer would not bugger off. So I grabbed the photos and handed him five dollars. A few minutes later, another photographer approached me with a plastic photo album showing my photos. He was charging $20 for the photo album. I don’t know how he was able to track us from a bunch of tourists. I noticed that he made photo albums for each person in my group. He was very persistent in selling the albums and followed us from the steps to the jeep that was waiting to take us to the tour bus parking area. He hopped in the jeep, clinging to the jeep, he continued to hassle and sell us the photos which we did not ask him to take in the first place. The price of the photo albums came down from $20.00 to $15.00, and further down as we came closer to the parking lot. My co-tourists just ignored his hassling. I did not have the need for the photos of me, I already took plenty of photos, but I felt bad for the photographer who had to do all that “hassling” to earn a living. I finally gave in and handed him all the change left in my wallet, which amounted to $8.00. As we reached the parking lot, the price of the whole album, which contained 20 photos came down to five dollars, but the other two jeep passengers just ignored him.

On our way back to the city, we stopped to admire the Man Sagar Lake. Earlier, our tour guide talked about the lake being the setting of a film. It was also the setting of a wedding of the son of an industrialist, who hired Jenifer Lopez to perform at the wedding party. The lake had a relaxing vibe, mixed with the incredible sight of the Jal Mahal "Water Palace" floating in the middle of the lake, with the Aravalli hills, said to be the oldest hills or mountains in India, in the backdrop. When I mentioned about the few migratory birds I saw, our guide said that nesting islands were created for the migratory birds, fish and local vegetation were reintroduced after the toxic silt was dredged from the bottom and new water system was developed. It was the most refreshing environmental news I heard, especially having passed the roads with so much litter and having seen garbage left on the roadsides. 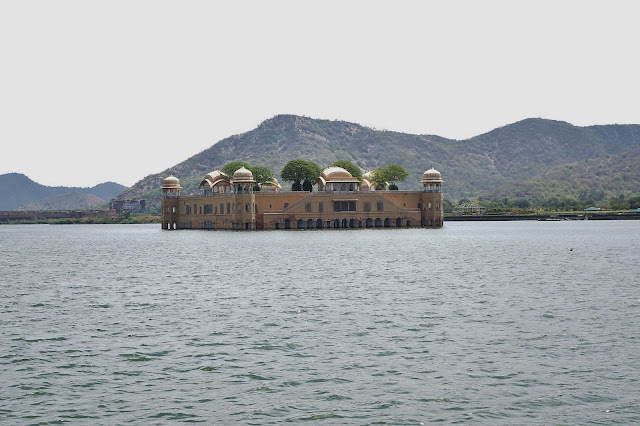 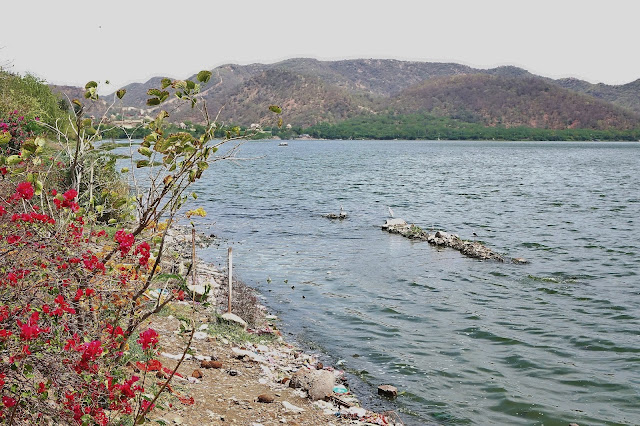 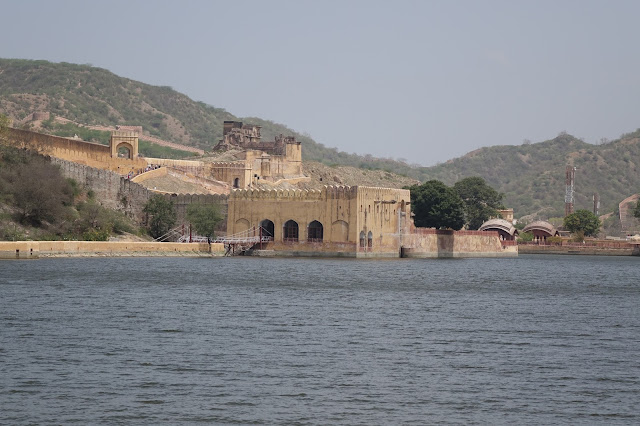 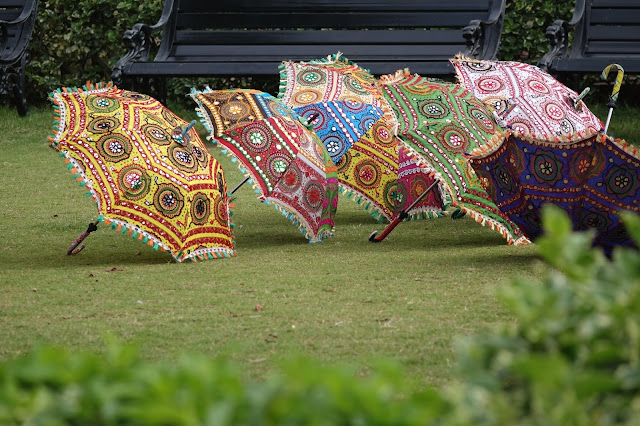 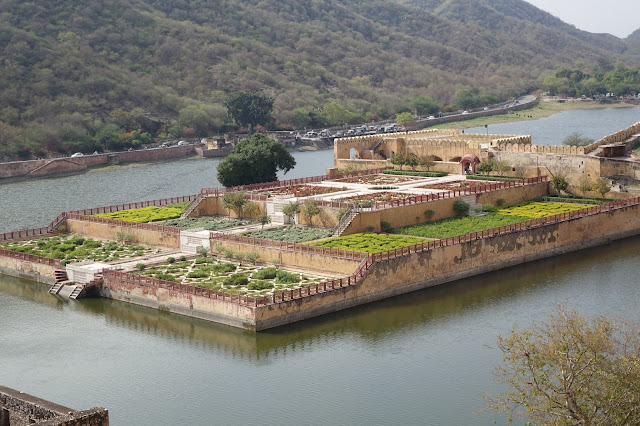 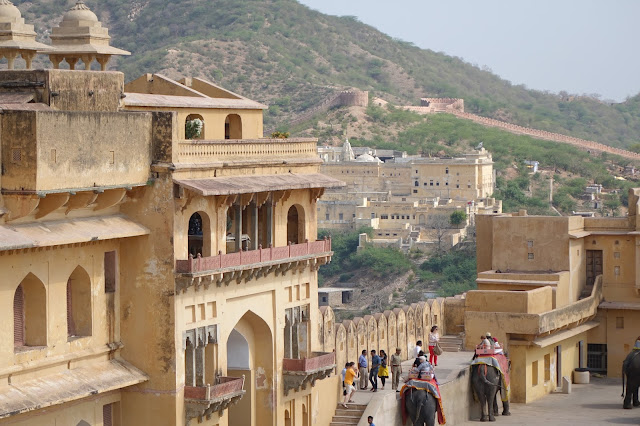 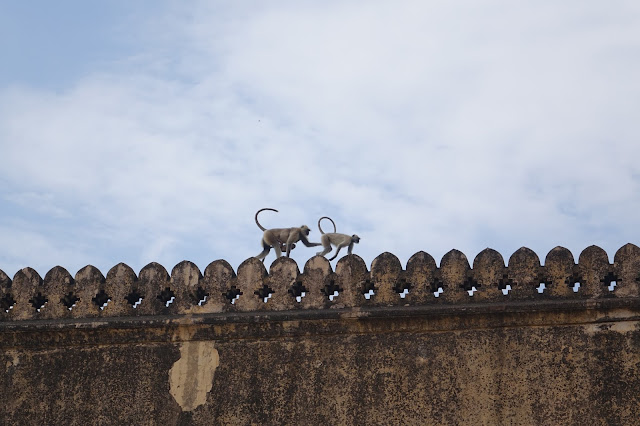