A City of Contrast


Our attempt to venture out on our own the first couple of days had proved fruitless. The following day, my sister and I joined our organized tour group. We had a full day visiting the tourist sites. Our first stop was the Raj Ghat, Mahatma Gandhi’s cremation site, marked by a black marble memorial platform with an eternal flame. Green and expansive gardens surrounded the memorial area. It felt as if we were so far away from the normal hustle and bustle of the city. Besides, we were the first group of tourists there. There were few local visitors: schoolchildren, women covered in black from head to toe, and men in white garb paying respect to the “Father of the Nation".

Next, we visited the Old Delhi, the walled city of Delhi. It was a total contrast to the peace and quiet of the expansive Raj Ghat. The streets were overcrowded and teeming with commerce where you’d find vendors selling wares of all kinds - from metals, fruits and vegetables to live goats. I saw men sleeping on the sidewalk amid the noise and bustle of the city; some men seemed to while away the hours. It was a mind-boggling experience to see how our bus got through the very narrow street with foot traffic, motorcyclist, and vendors pushing carts, ox car, and rickshaw drivers fighting for a space to get through, on our way to the Jama Masjid Mosque.

After visiting the Jama Mosque, we took a rickshaw ride to explore the Chandi Chowk market area. We did not get off the rickshaw to shop, just navigated through the alleyways with many fruit and vegetable vendors and stores selling wares of all kinds. The whole place looked run-down. Meshes of electrical wiring dangled over the alleyways that I could not help thinking about the safety of those electric wires.

We visited the Humayun's Tomb, a UNESCO World Heritage Site where, again, a great contrast to the Old Delhi. We had to walk for miles to reach the tomb, rather the palace that houses the tomb(s). Made of pink marble, the architecture was very impressive.

We went back to the Old Delhi where our bus drove around the Red Fort (16th century) before heading for lunch at a local restaurant by the West Gate. The restaurant looked very unassuming from the outside, but very nice inside. Not far from the restaurant, we passed an area where it looked dilapidated, but still teeming with commerce or as a co-traveler put it, “a 5000 person construction camp".

We walked barefoot with the worshippers at the Lakshmi Temple and toured the kitchen and dining hall. It was a humongous kitchen where at the end of the row of pots, I saw the biggest pan ever; it took three men to stir the pan with stirrer as big as a boat paddle. I thought there was some sort of festivities because there was a crowd eating at the dining hall. However, I heard that the kitchen was open to the public 24/7.

New Delhi is a city that looks beautifully designed architecturally, with expansive streets lined by trees, but it is not practical for the foot, ox cart, and rickshaw traffic. You have to take the bus or taxi to explore the parliament area. Ironically, tour buses were not allowed to park in the area, so that our bus just drove around in order for us to admire the old government buildings from the outside. 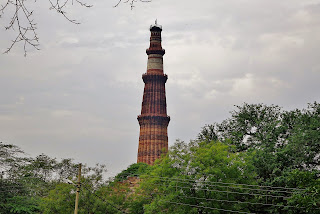 We traveled a bit farther from the city to see the Qutab Minar, another World Heritage Site, said to be the tallest brick minaret in India. I saw many vendors selling sweets, fruits, sugarcane juice, and all kinds of snacks from pushcarts. The different pushcarts looked fascinating.  I thought the vendors took the makeshift store into an art form. I saw women stringing marigolds or selling flowers in the middle of an intersection. The roadsides were full of litters, and it broke my heart to see half-naked children playing in the middle of the street, unattended.

I may not know much about the history and politics of the region, but I saw the grandiose past that's in sharp contrast to the reality of the present, enough to say that New Delhi is a city of contrast. Yes, I enjoyed and admired the architecture, the magnificent tombs that were built like palaces, but also having seen the extreme poverty where kids scoured for food in the middle of the streets, made me react with feelings of helplessness and anger.