- April 25, 2015
For decades, adventurous people go to Nepal to climb or set foot on the highest mountain on earth, Mount Everest. I did not come to Nepal for that reason, but when I mentioned that I was going to Nepal, a co-worker told me to, at least, take the flight to the mountains and see the amazing view of the Himalayas and the eight tallest peaks in the world, which includes Mount Everest (the tallest at 29,028 feet). So I signed up for the ‘mountain flight’ offered by some Nepalese airlines. The ‘mountain flights’ offer dawn/early morning panoramic views of the Himalayas and Mount Everest; each passenger is guaranteed a window seat. 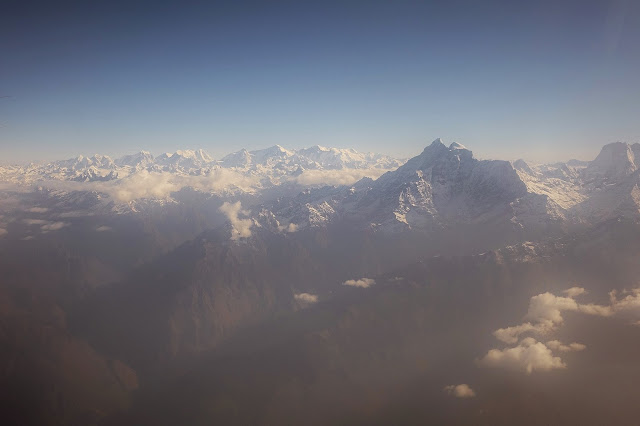 It was raining when we arrived in Kathmandu. By 7:00am the following day, we were scheduled for the mountain flight on Yeti Airlines. I anxiously waited to board after going through the normal airport security, not realizing that the flight was dependent on weather condition. As we approached the boarding area, the airline staff told us to wait about 10 minutes. Then we saw the monitor flashing “awaiting report” after our flight number. The flight status was under ‘awaiting a report from the mountain’ for some time until it changed to “all flight canceled’.

Later, I joined our tour group to see a glimpse of Mt. Everest from the highest peak in Kathmandu Valley (Nagarkot at 2150m elevation). We drove onto a very narrow and winding road to reach the highest point. Below, across a vast expanse of rice terraces or wheat fields, a group of women in brightly colored clothes with long flowing skirts bent as if picking something and some carrying a heavy load on top of their head.  Our guide told us that Kathmandu was once a lake. That explained why we were seeing lush and fertile land created by lakes and the mountains. We passed some trucks loaded high and small buses with people clinging to the sides, sitting on top of the vehicle, hanging off the back -- holding on. We were inches apart from vehicles coming from the other direction – headlights to headlights. We passed into a forest of pine. We bounced through crevasses and it seemed there was nowhere to turn and we could only go to the end of the road at Nagarkot. As we reached the viewing point, a light rain started to fall. So we did not see a glimpse of Mt. Everest as the horizon was covered in fog.

Five days later, I joined a couple of risk takers from Canada who decided to try the “Mountain Flight” again. Our persistence paid off. The day looked promising as we left our hotel. We got to the airport and went through security and boarding area without a hitch, except that when I reached for my iPhone it wasn’t in my bag, so I panicked and went back to the security area. And that’s how I found how laid back and nice the Nepalese people are. They took my bag and ran it through the x-ray machine. Imagine my delight when I saw the image of my phone from the x-ray monitor.

The early morning light was bright but hazy as our plane took off. Although everyone got a window seat, I must say that I did not get the best one since I made the decision to fly the last minute. Although everyone was given a chance to see the whole view, I would have preferred the right side so I could easily follow the route map (with names and elevations of mountain peaks) the first time through. We each took turns to view Mt. Everest from the cockpit while the pilot talked about it.

To my right, through the window of another passenger, I saw a succession of mountain peaks covered in snow, rising above the clouds. The snow-capped peaks pretty much covered the horizon. The sight was impressive. Then something far above the clouds shimmered. It was the iconic peak of Mount Everest. The plane turned to give those of us on the left side a better view. Although I wanted to capture the whole view on film, my focus shifted and perspective altered. I wanted to see the mountain not through the camera lens, but with my own eyes. The upper outline of the mountain became clearer, towering far above the clouds. Then the flight guide tapped my shoulder, pointed to the peak and said, “Holy Mountain”. I thought to myself, “Holy Shit…it’s amazing”. I got confused because I did not see that name (Holy Mountain) from the route map. In Nepal, Mt. Everest is called Sagarmatha, Sanskrit meaning “Goddess of the Sky”. However, the ancient name for the mountain is Devgiri (in Sanskrit, it means “Holy Mountain”). Its Sherpa/Tibetan name is “Chomolangma”. Of course, to the western world, the mountain is known as Mount Everest, the name given in 1865 by Andrew Waugh, the British surveyor-general of India, after Sir George Everest, his predecessor.


Click HERE to watch the full video on You Tube.