Season's Greetings: What a Wonderful World 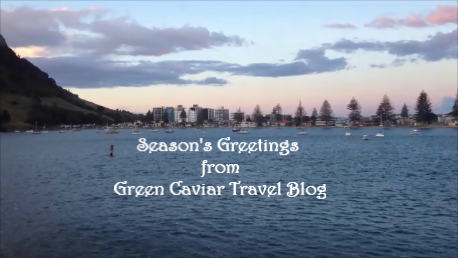 2014 has been a great year for travel. Although I would rather talk about the poetry and romance of travel, I’m very thankful for the blessings of good health and the strong economy. I like the quote, “Travel is the only thing you buy in life that makes you richer.” I must add that the money I spent to see places and do the things in my travels, gave me more than a thousand percent return on investment. It’s priceless. I learned so many things and found religion in so many places. That said, I’d like to borrow another phrase from Yes, Virginia There Is a Santa Claus, “In this great universe of ours man is a mere insect, an ant, in his intellect, as compared with the boundless world about him, as measured by the intelligence capable of grasping the whole of truth and knowledge."

In addition to finding religion in a place said to be the holiest place on earth, I also found God in the rocks of Uluru and Kata-Tjuta and Cappadocia, and the rock walls of Petra, the skies of Uluru, the green hills of Akaroa and the Otago region of New Zealand, the calm waters of the Pacific, the white hills of Pamukkale, and the snow-covered Denali Mountain, Mount Potts, Mount Sunday, to name a few.

Here's a video of my 2014 Travel Highlights.
Click HERE  to watch it on You Tube or click on the thumbnail below.

Here's a video of Weekend Getaways in Northern California.