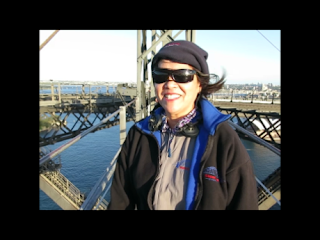 The air got colder as we started our ascent heading to the peak of the lower arch.  So I had to wear the fleece jacket attached to my belt. Aside from being suited in astronaut jumpsuit, I carried all the necessary gear like headphones, hats and a jacket provided by Bridge Climb.  Everything was attached to my belt.  We were only allowed to bring sunglasses, but the company provided a strap to secure them. Lockers were provided for all of our other personal belongings. At first, I was not happy at the rule of not being able to take even a phone camera with me to capture and Instagram a photo of my adventure. I thought it was another way of the Bridge Climb to make money from the photos because I had to add $54.00 to the actual cost for photos.  As we geared up, I began to understand that everything was for safety reason. The keyword there was to latch-on. Everything was attached to our belt latched on a wire rope all throughout the climb. Of the 3 ½ hours allotted to the climb, a good amount of time was spent on safety briefing and gearing up. Before gearing up, all thirteen of us went through a scanner and a breathalyzer.

Latched on a wire rope that started from the base (2nd floor), we walked on a narrow boardwalk past the Bridge base to the Bridge’s lower arch. Our guide told us about the history of the bridge and some light-hearted stories like the young guy, Kelly, who fell off the bridge and survived the fall. Our guide pulled-out her camera as we reached the peak of the lower arch. It was our first photo-op. She then started to point out and talk about some landmarks below: the iconic Opera House and the Darling Harbour, an island and the residence of the Prime Minister. Then, the challenging part: We took a very steep and narrow staircase to the upper arch (2nd photo-op). After which, it was easy to ascend to the top of the bridge. We were 134 meters above sea level with a 360-degree view of Sydney. Beneath us, the commercial boats shrunk into tiny toy boats. It was the last photo-op/video and was time for a celebration for making it to the very top. 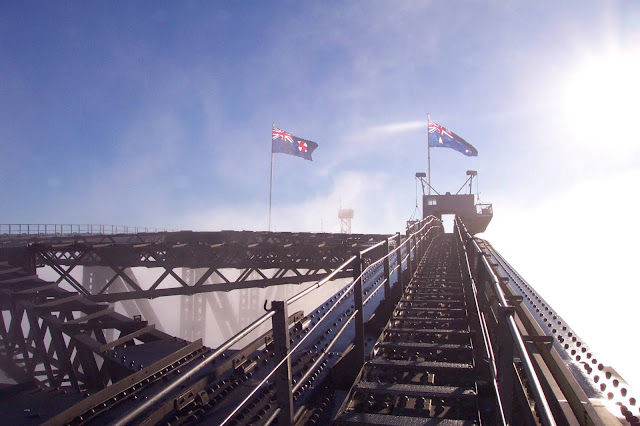 The sun started to sink as we descended providing a beautiful backdrop of our adventures.  The noise of the zooming trains down below drowned our guides continuing narration of the history of the bridge.  Anyhow, I was still high on adrenaline at that point that it was hard for me to have a grasp of the bridge history and other points of interest that our guide was talking about. 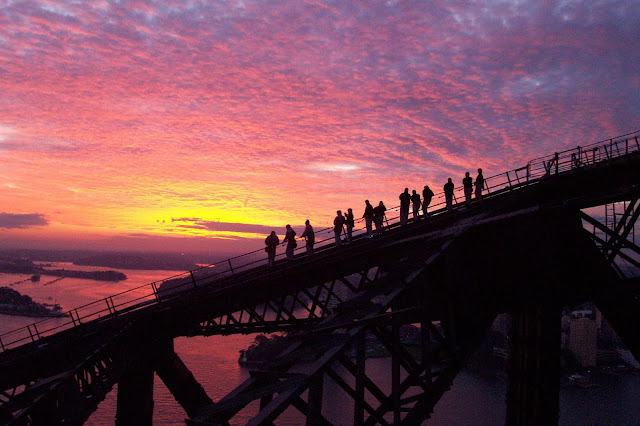