“Izmir or Smyrna is very much like San Francisco, California,” our guide announced as we approached Izmir. Still reeling from a long ride and talk about politics, I thought that he was making a comparison in the context of politics, that being of a liberal city. The obvious similarity in topography did not register immediately until we arrived in the city where I saw homes and buildings on the hillsides, ships and an expanse of sea. Izmir is hilly and bounded by shoreline (forty miles of shoreline, according to our guide). I was excited when our guide mentioned that the boardwalk and pathways are within easy access from our hotel. I wanted to go for a long walk after sitting on the bus for hours.

After settling into my hotel, I headed down for a long walk. Two blocks later, I passed an elegant and charming café called Mado. Seduced by the display of ice cream, macaroons and pastries, I went inside and ordered ice cream. Since it was rather late for a long walk, I sat down for kahve (my caffeine fix) after my ice cream instead.

The following day, I went for a walk late in the afternoon and stumbled upon an amusement park full of families out on the town with their children. Neither familiar nor foreign, it was nonetheless odd: What were these well-dressed kids, men and women in designer clothes doing at the park, I thought. Older women covered to their heads, in their black chador holding on to the kids. I saw wreaths and wreaths of flowers (the sort of flower arrangement used in funeral in the US). Then the bride and groom emerged from a limousine. A few yards later, I saw another wedding event. I could only assume that April is the month for weddings in Turkey for earlier that day, I saw wreaths at the Hilton and noticed that there was a big wedding there. I did not stay at the Hilton, but used the hotel towering logo as my landmark for finding my way through the city. 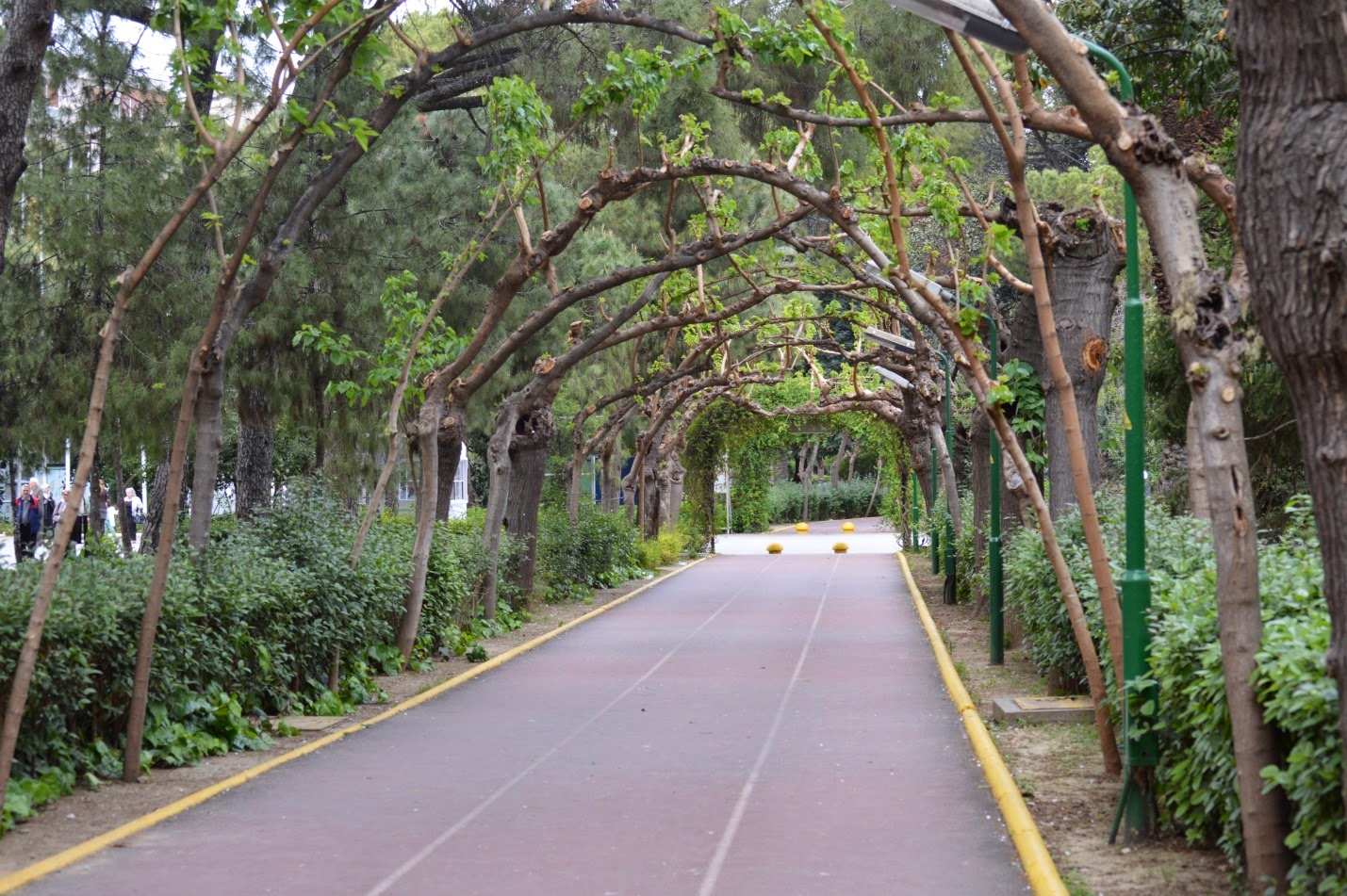 I continued to walk through a vine-canopied trail when I realized I had walked far enough but saw no sign of the ocean or the boardwalk. I asked a woman in jogging outfit how to get to the boardwalk; she just shrugged off, she did not speak any English. I then asked a young looking couple, but they did not speak English either. I finally ran into a young woman who tried to listen to me and look at my hand gestures as I described the boardwalk...sea...water as if I were playing a charade. She answered in the same manner with her hands pointing to the left, then right and straight ahead. After wandering through the streets for about an hour, I came upon a lively corner, a swirl of taxis. It was the heart of the city center. I probably had ‘TOURIST’ written all over me because a not-so-clean-looking dude approached and talked to me in English. He said that he studied and lived in the US and now the owner of the coffee shop nearby. He offered me to try their coffee (yeah right, I thought).

The boardwalk was full of young people. Almost every inch of the ledge was occupied, but I found a space to sit and rest my tired feet, and look over the water. I sat by a young woman who bought fresh little round green fruits sprinkled with salt. I asked her what they were. She asked the man sitting next to her how to say the word in English. He didn’t know it either. She pulled her smart-phone out, looked the translation up and said with smile, “PLUM.”

I got up to explore the boardwalk area when I stumbled across four of my tour mates. They offered me a place to sit. We were talking, trying to get to know more about each other when suddenly I heard a loud bang and saw a smoke seemingly coming from the car, about three blocks away. Then, I saw young men marching towards our direction, hollering and chanting.

“Oh My God! A violent rally, let's get out of here!" I exclaimed. “This must be the thing that my friends and family warned me about and told me that it's not really safe to go to Turkey,” I thought.

As it turned out, they were young men wearing their soccer team’s color, celebrating their teams winning the game the night before. A police car escorted them. I felt stupid.

We only stayed in Izmir for two nights, not enough to make much of an impression of the city and its culture. My introduction to the city was the 360-degree view or the Wikipedia version of its 3500 years of history as told by our guide. And of course, the Greek connection. It’s believed that Homer, the Greek poet and author of the great epic ‘Iliad’ and ‘Odyssey’ was born there. 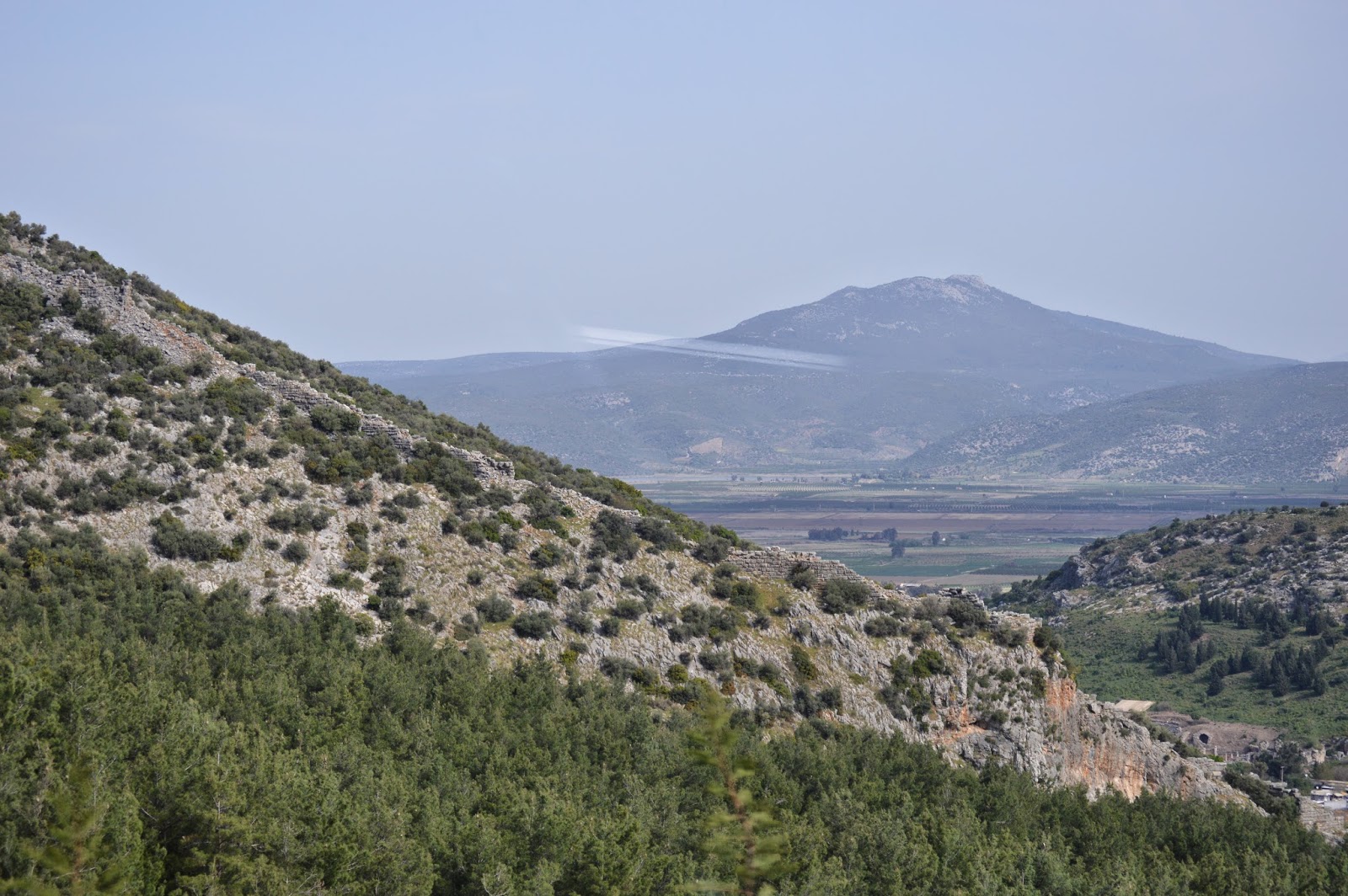 We drove down the olive green valley, bounded by distant bluish mountain ranges and green hills on our way to Turkey’s great wonder: EPHESUS. We spotted traces of ancient past high up the green hills as we neared the city. The main attraction is the Temple of Artemis, built in honor of Artemis (also called Diana), one of the maiden goddesses of Olympus. The first temple was built in 800BC; destroyed in 7th century, reconstructed, destroyed (burned to the ground by Herostratus) destroyed, and rebuilt after the death of Alexander the Great.

Ephesus draws more visitors due to its proximity to the port city of Kusadasi and Izmir and the two nearby attractions: The House of the Virgin Mary and the Church of Saint John. So it was a busy day for us listening to our guide’s explanations about the different parts of the complex while waiting our turn to pose for pictures in front an interesting part of the complex.

The speckled of spring flowers was a great diversion while waiting for the crowd to clear so I could take photos of the library, the communal toilets and other parts of the complex without the people. 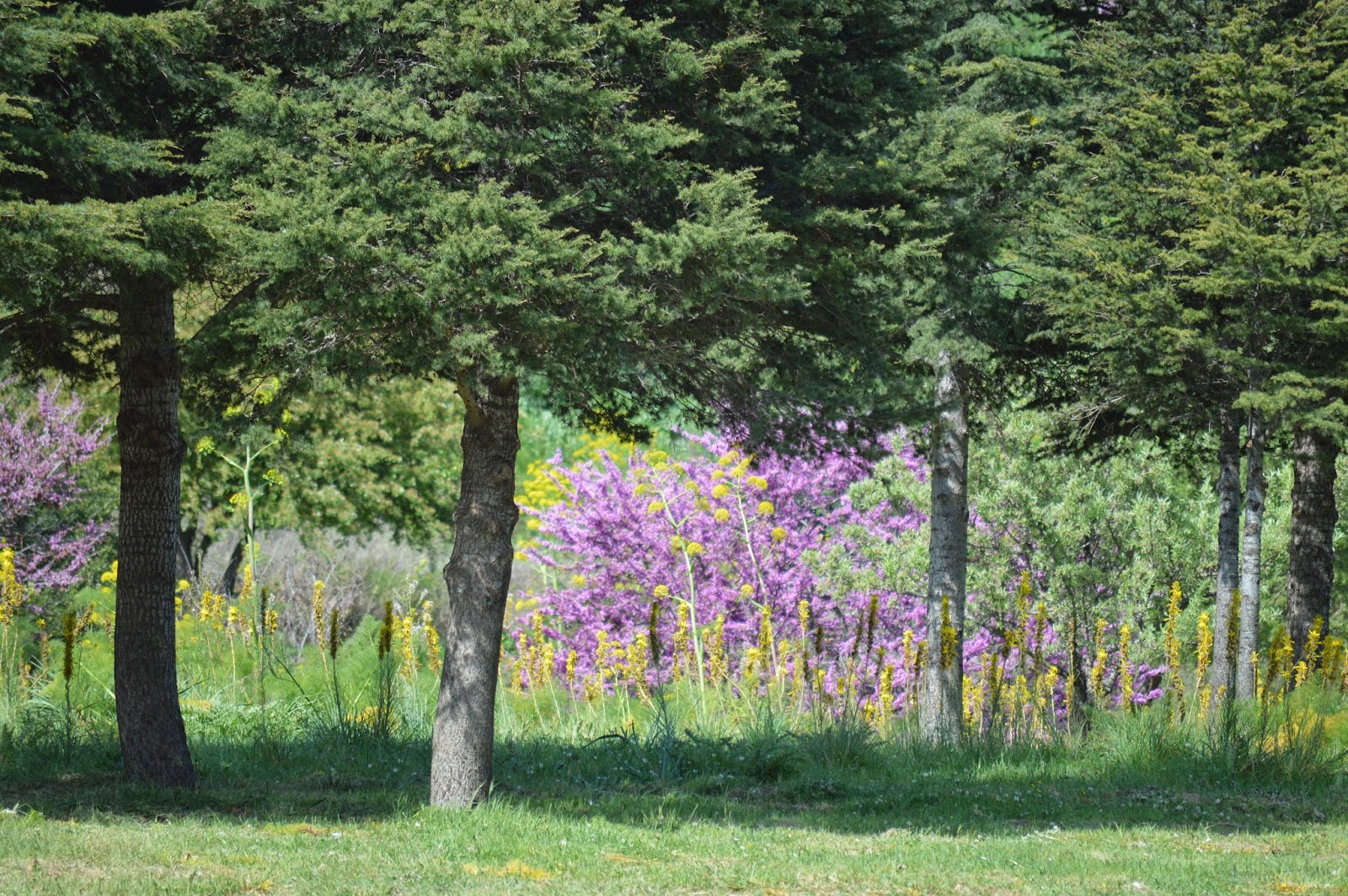 The library...the most popular and photograph part of the complex 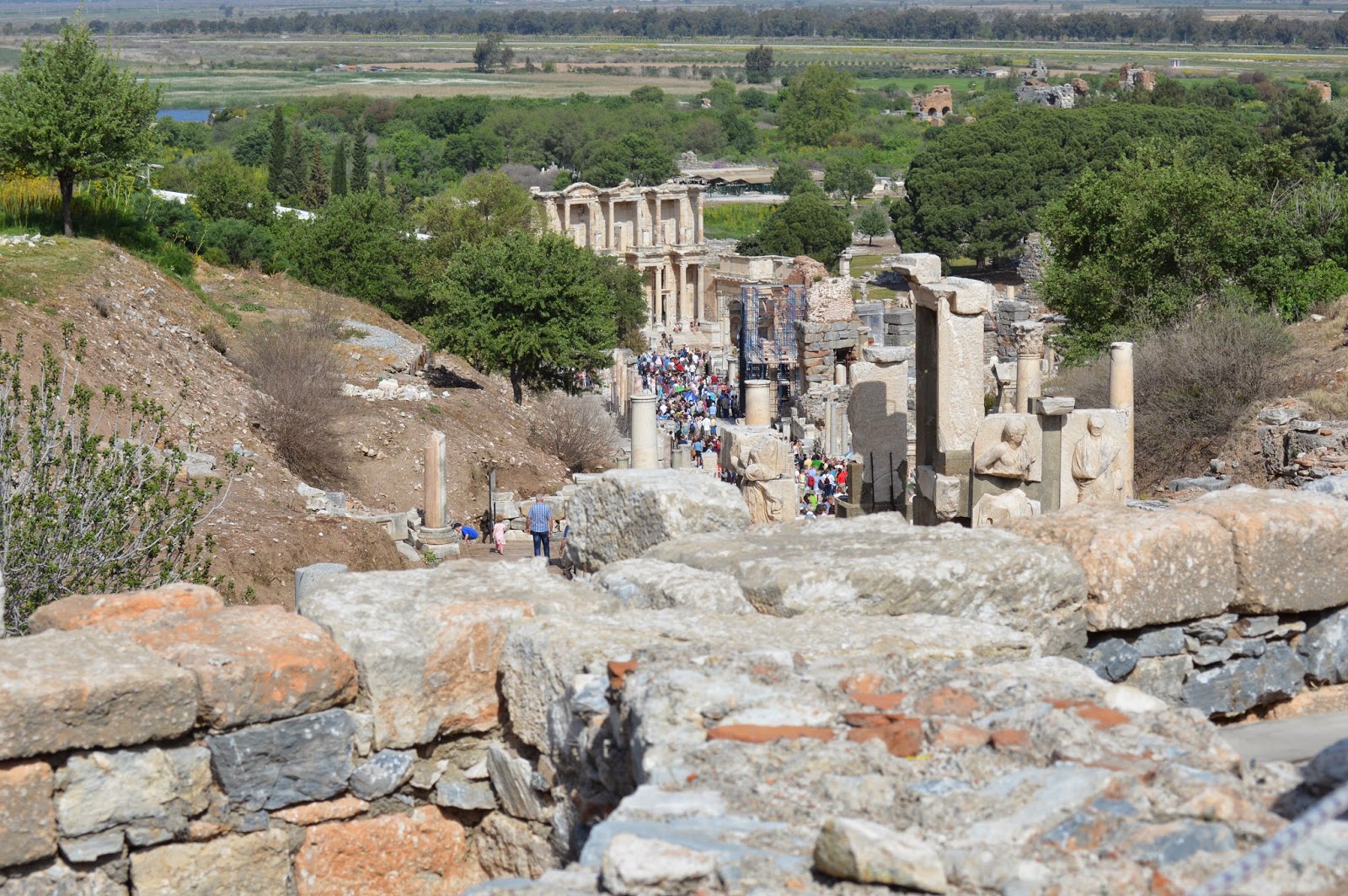 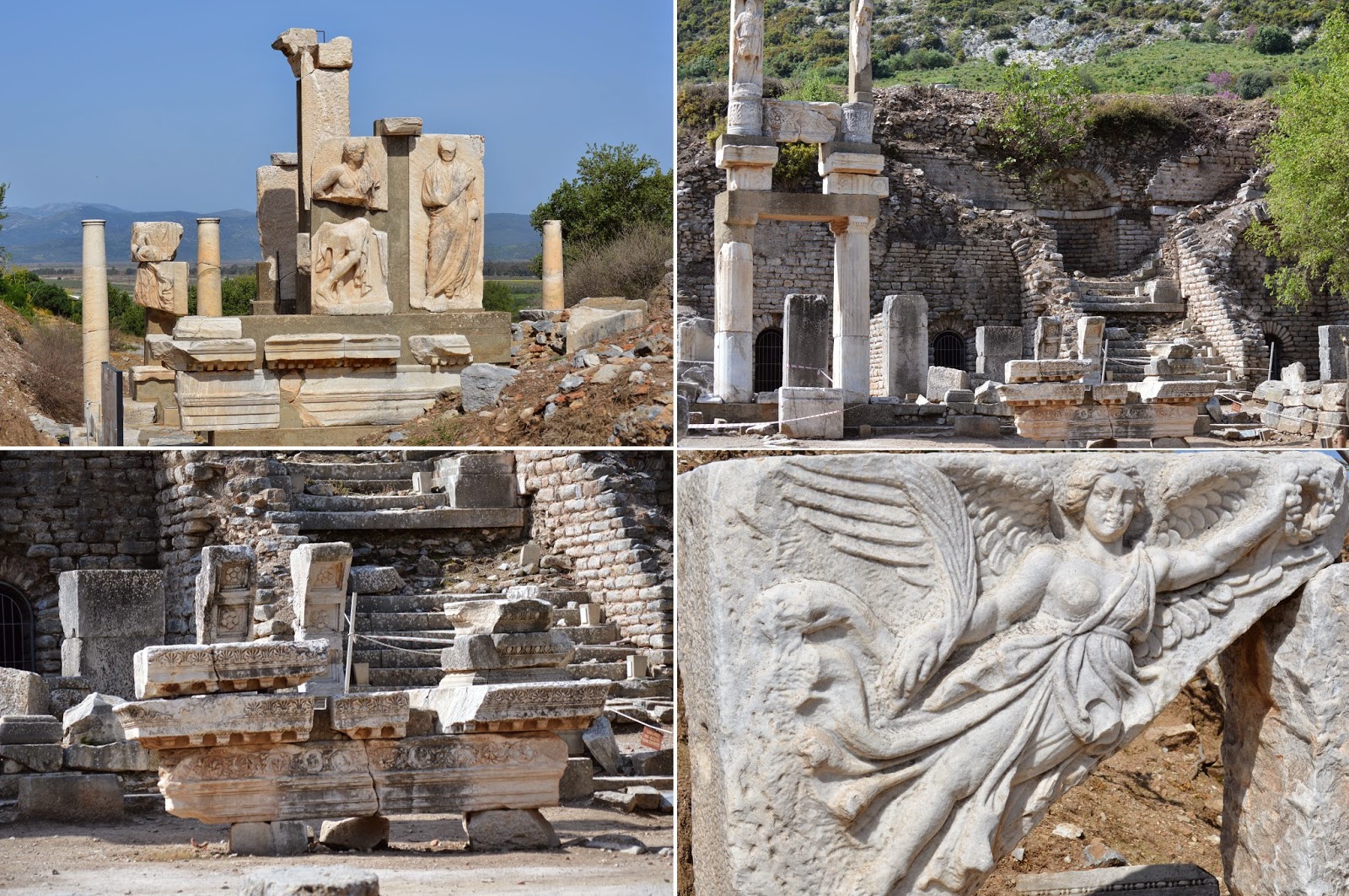 The fountain building was donated by Tiberius Claudius Aristion and his wife between 102-114AD in honor of Artemis of Ephesus and Emperor Trajan (98-117 AD). 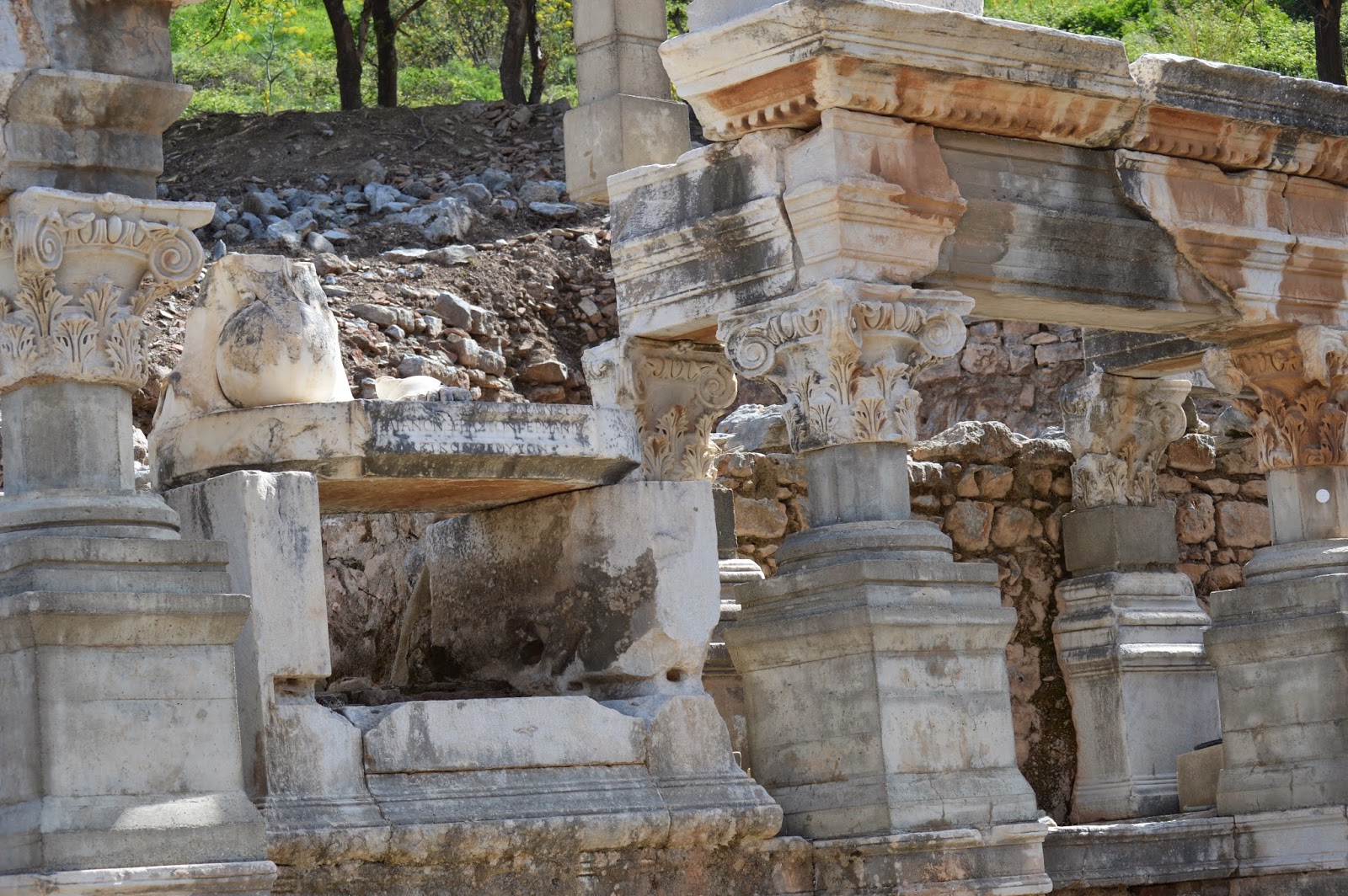 ...and more symbols of antiquity