Deer and elks, seagulls and murres, marine  mammals (sea otters and seals), spectacular scenery, craggy coastline, historic ruins, pillow basalt rock formations, cliffs falling into the sea, crashing waves, jutted mountain tunnel, suspended bridge, black sand beach and a lighthouse perched on a cliff –an epic setting we explored in less than half a day.  With the absence of fog and wind, you might say, "Disneyland".   But no! Maybe Disneyland for adults, except that everything was real, authentic, spectacularly beautiful, and did not cost a penny.

It was unseasonably warm winter day (73◦F) in the San Francisco Bay Area today (2/24), so we headed to the Marin Headlands intending to trek the coastal trail. But we decided to hike to Point Bonita Lighthouse first before trekking the Marine Headlands Coastal Trail. The lighthouse was about a couple miles from the parking lot.  We walked about half a mile from where we parked our car.  After our ascent, we reached the end of the road and the beginning of a fun-filled day; We soaked in the beauty of nature, the spectacular scenery, experienced an Indiana-Jones-type of adventure by walking the coastal cliff and walking through a jutted mountain tunnel and crossing a suspended bridge that lead to the lighthouse.
#1.   Tule elks greeted us before the trail entrance so I could not help but take photos of these little cuties. 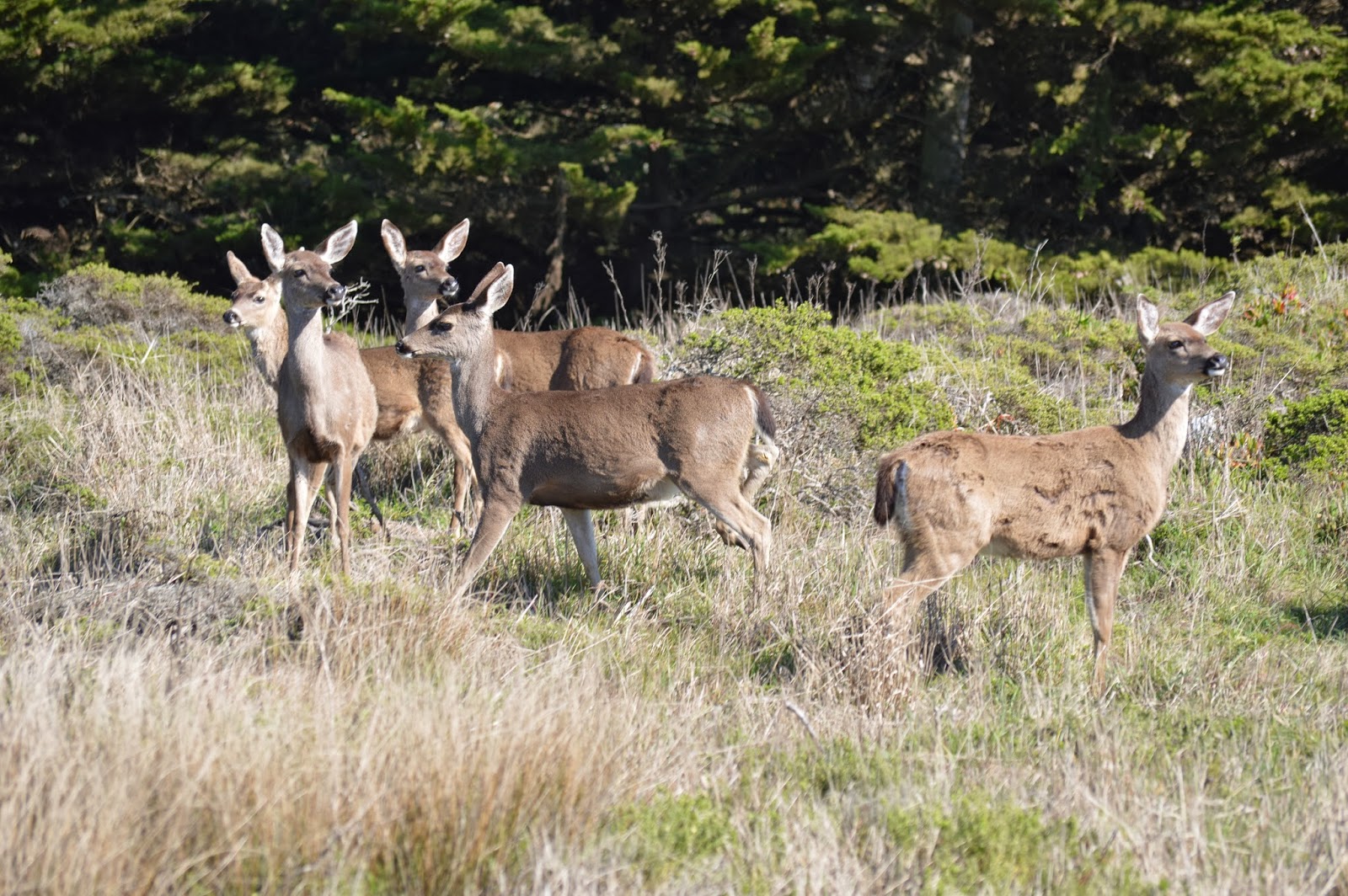 #2.   For once, there was no fog or wind on this side of the bay, so the panoramic view of the Golden Gate Bridge was visible on one side, and the gorgeous views of the Marin Headlands cliffs dropping straight into the ocean on the other side. 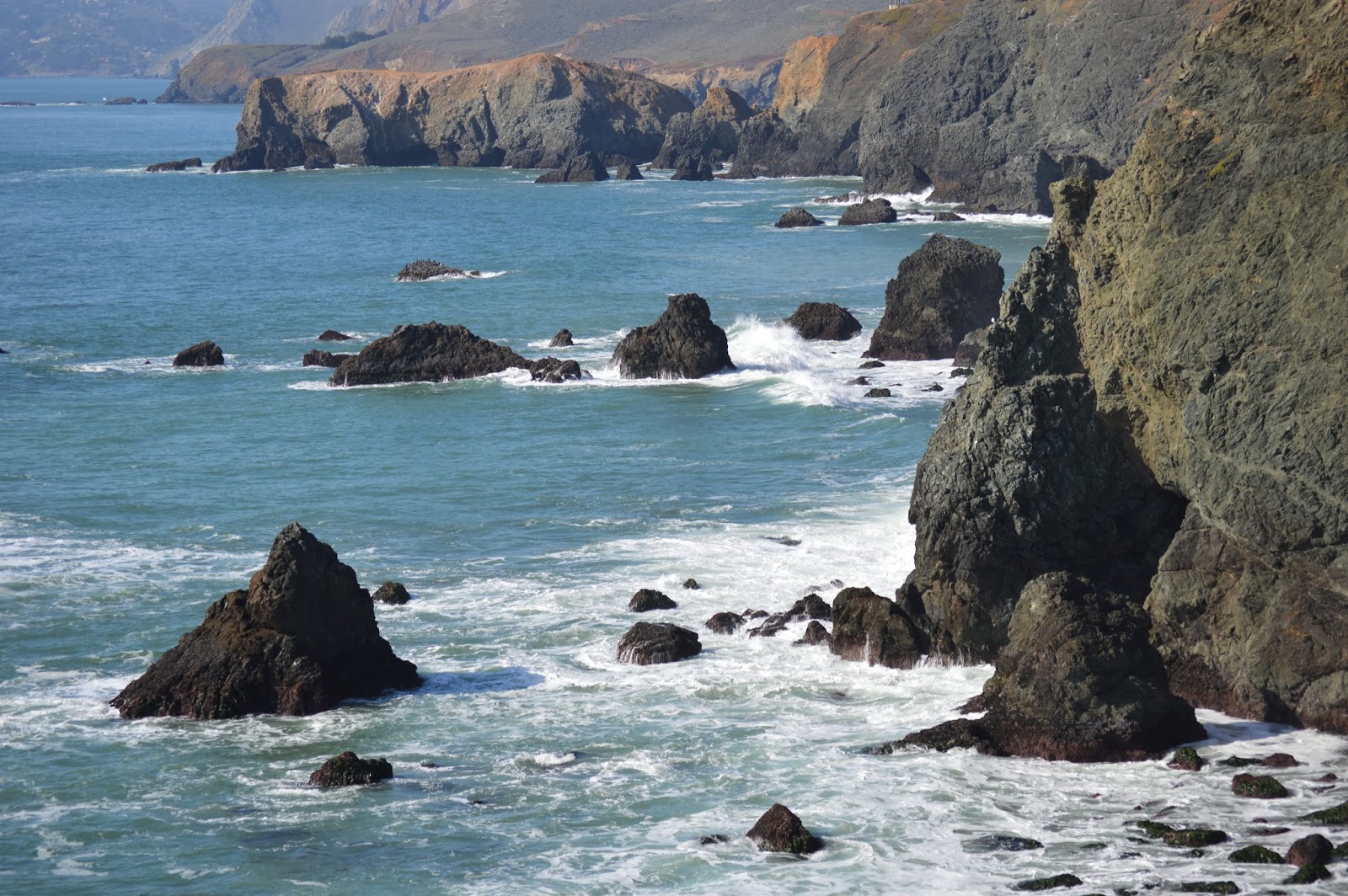 #3.  We walked down the slightly sloping trail and saw wild flowers on the side of the trail. Looking down we saw and heard the waves crashing down into the rocks. 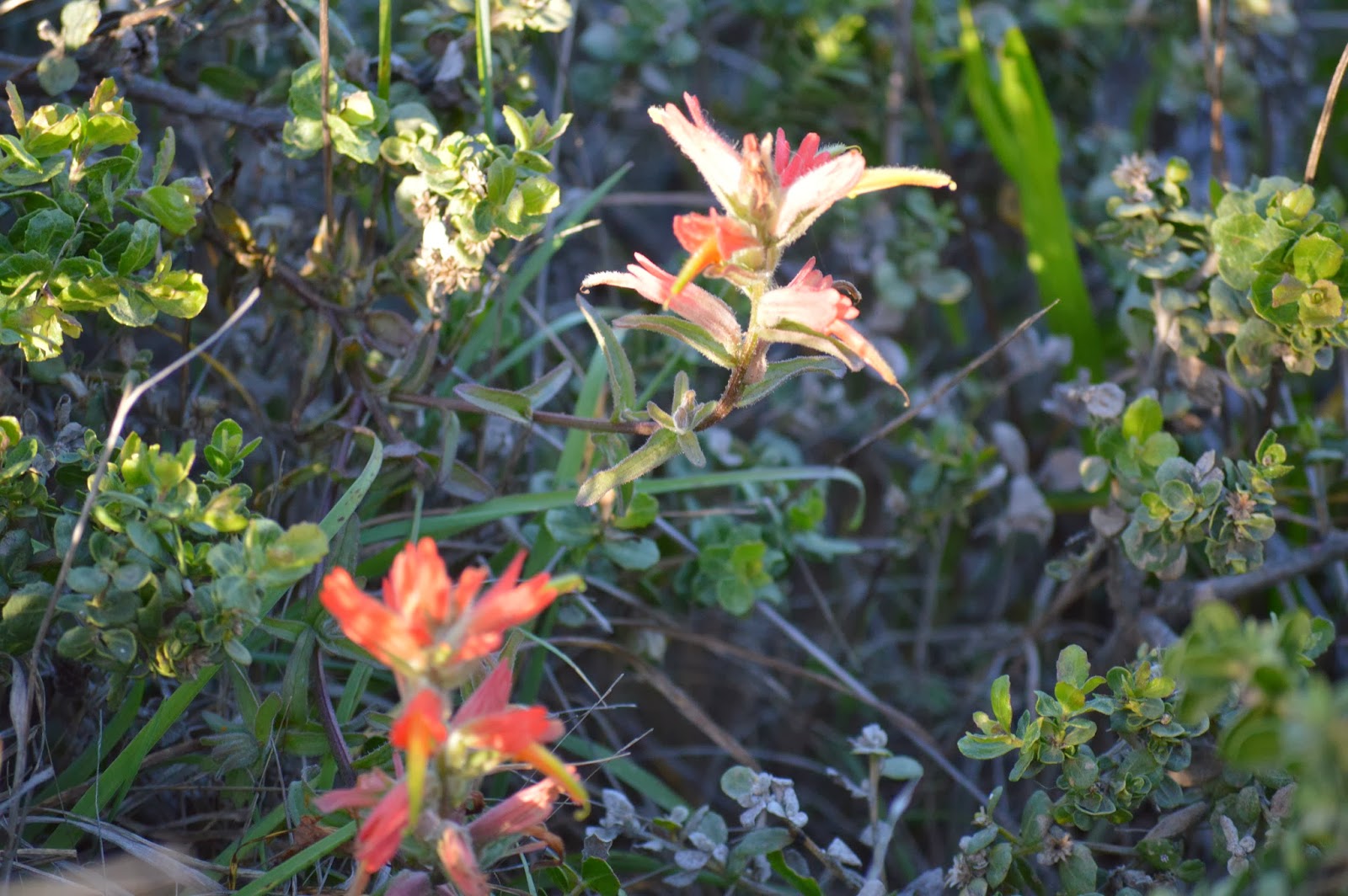 #4.   We saw wooden sticks planted on the ocean floor.  We learned later that they were part of the pier and the historic Coast Guard rescue station. 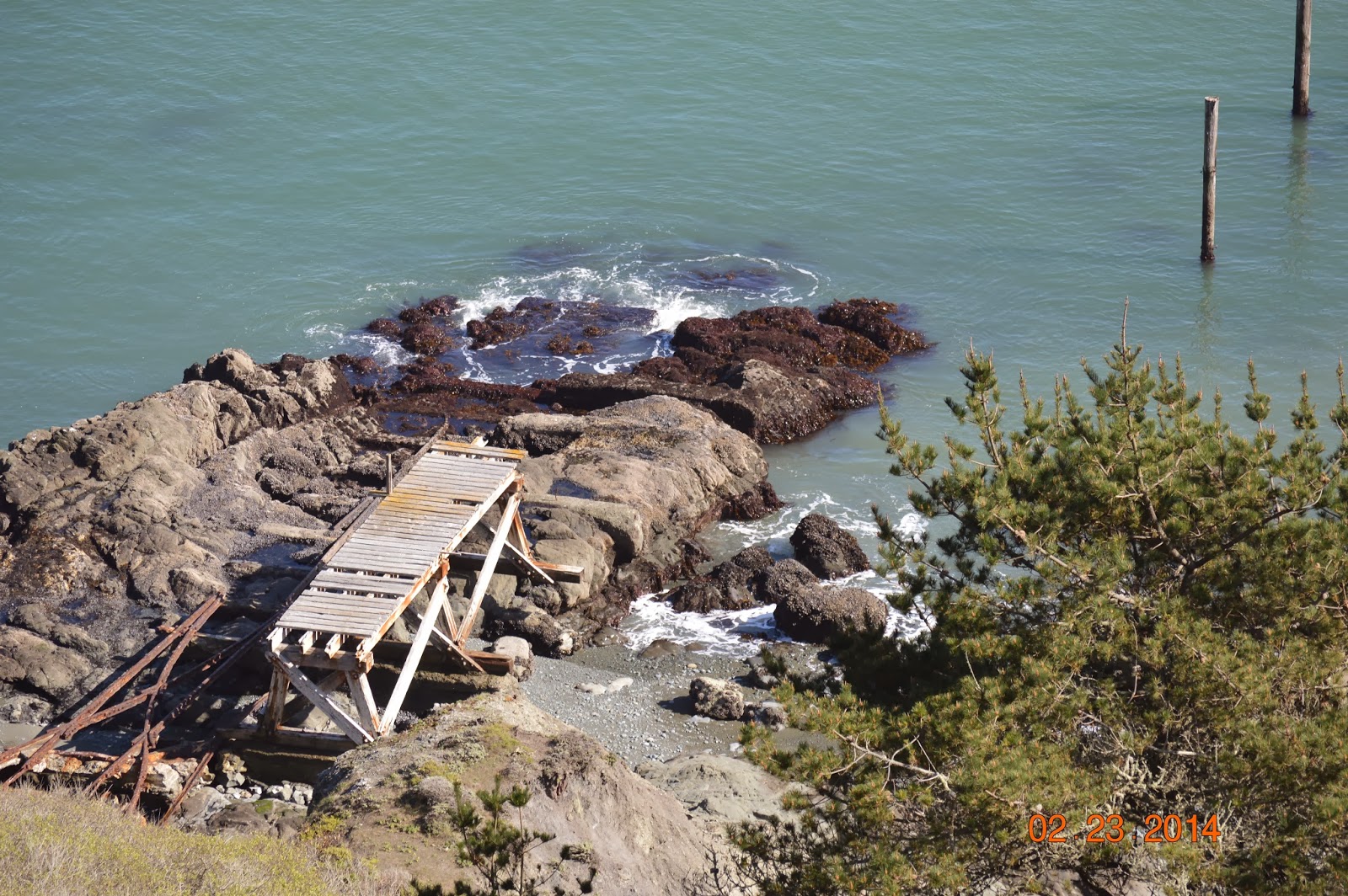 #5.  We saw seals and sea otters lazing down the rocks below; one sea otter seemed to take on the orange-reddish color of the golden gate bridge. 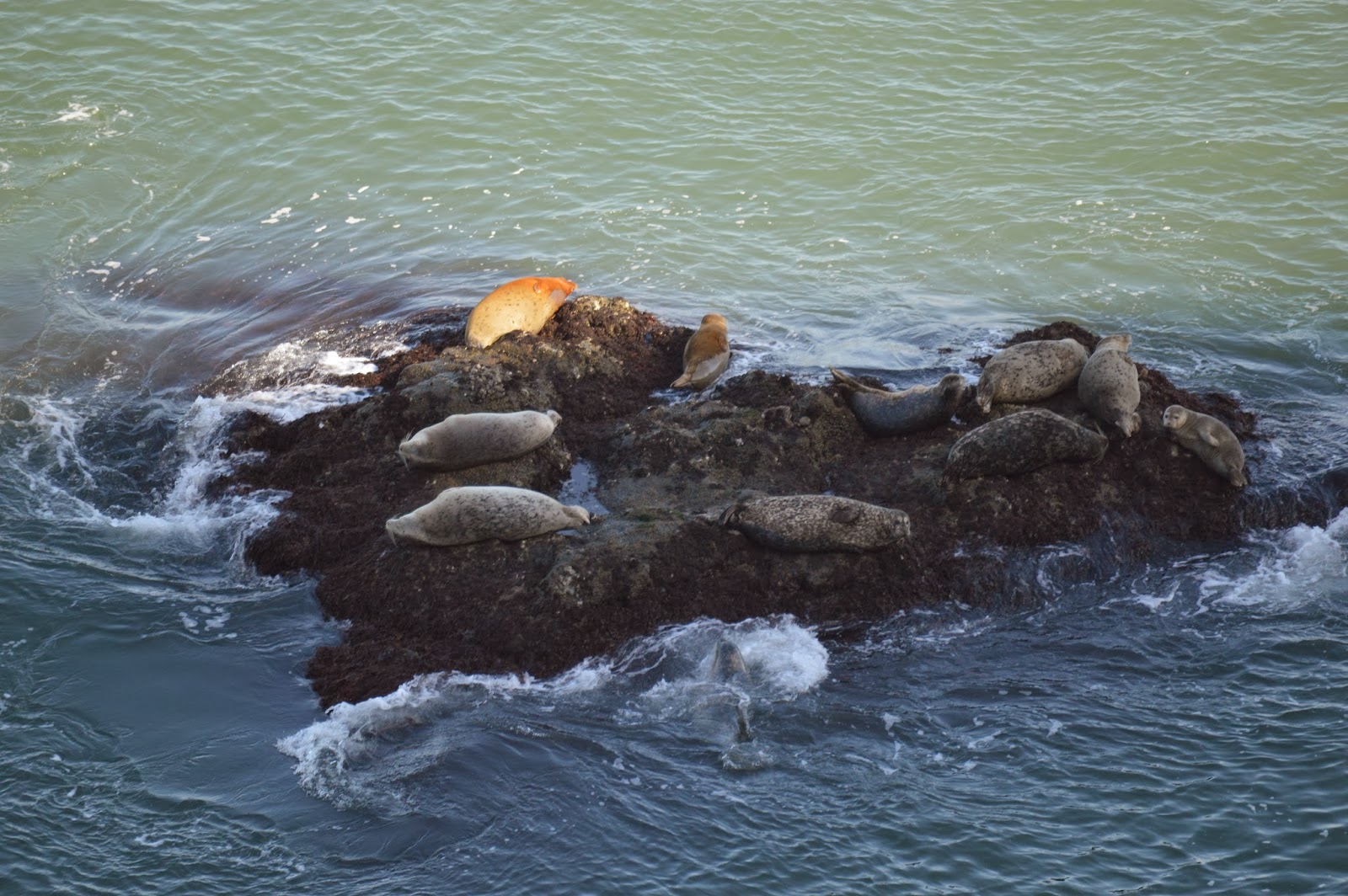 #6.  We walked through a tunnel that drove through a small mountainside that jutted into the sky like a scene from Indiana Jones (It was explained to us later that the tunnel was hand carved hard rock tunnel built in conjunction with the lighthouse move)

#7. Black-sand beach down below and a spectacular view of the suspension bridge and the lighthouse immediately greeted our view as we emerged from the tunnel.

#8.  We crossed the suspension bridge 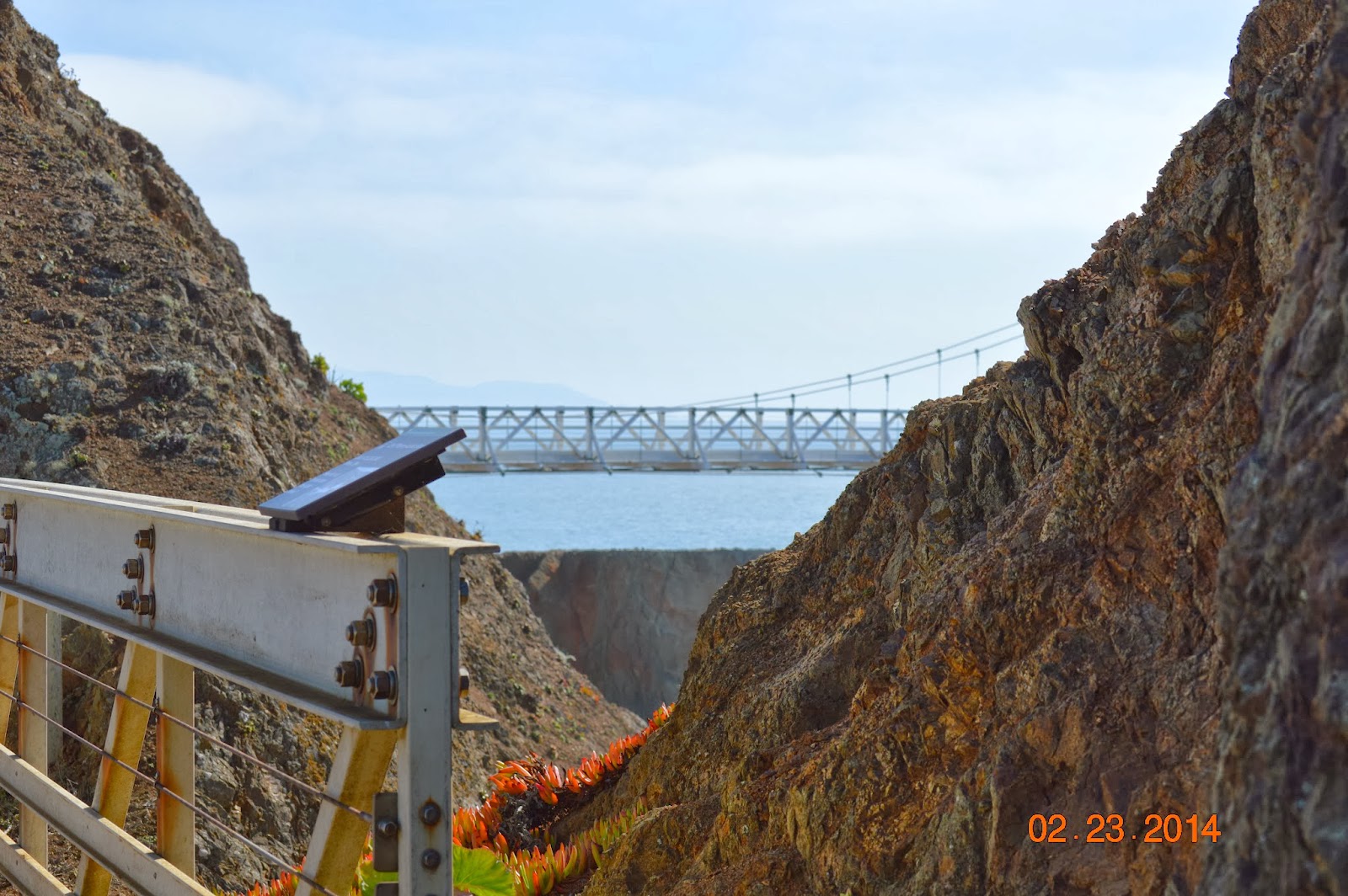 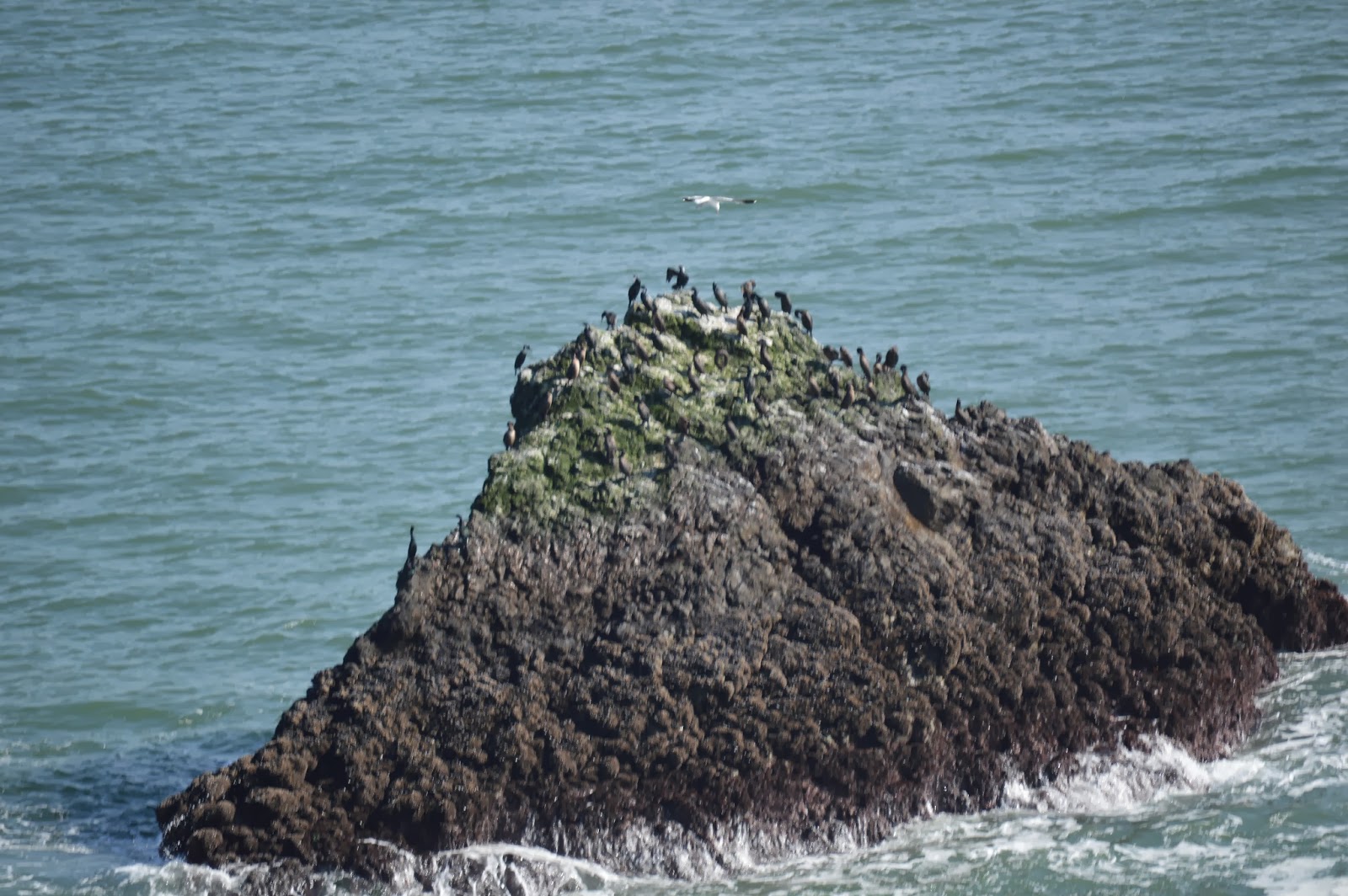 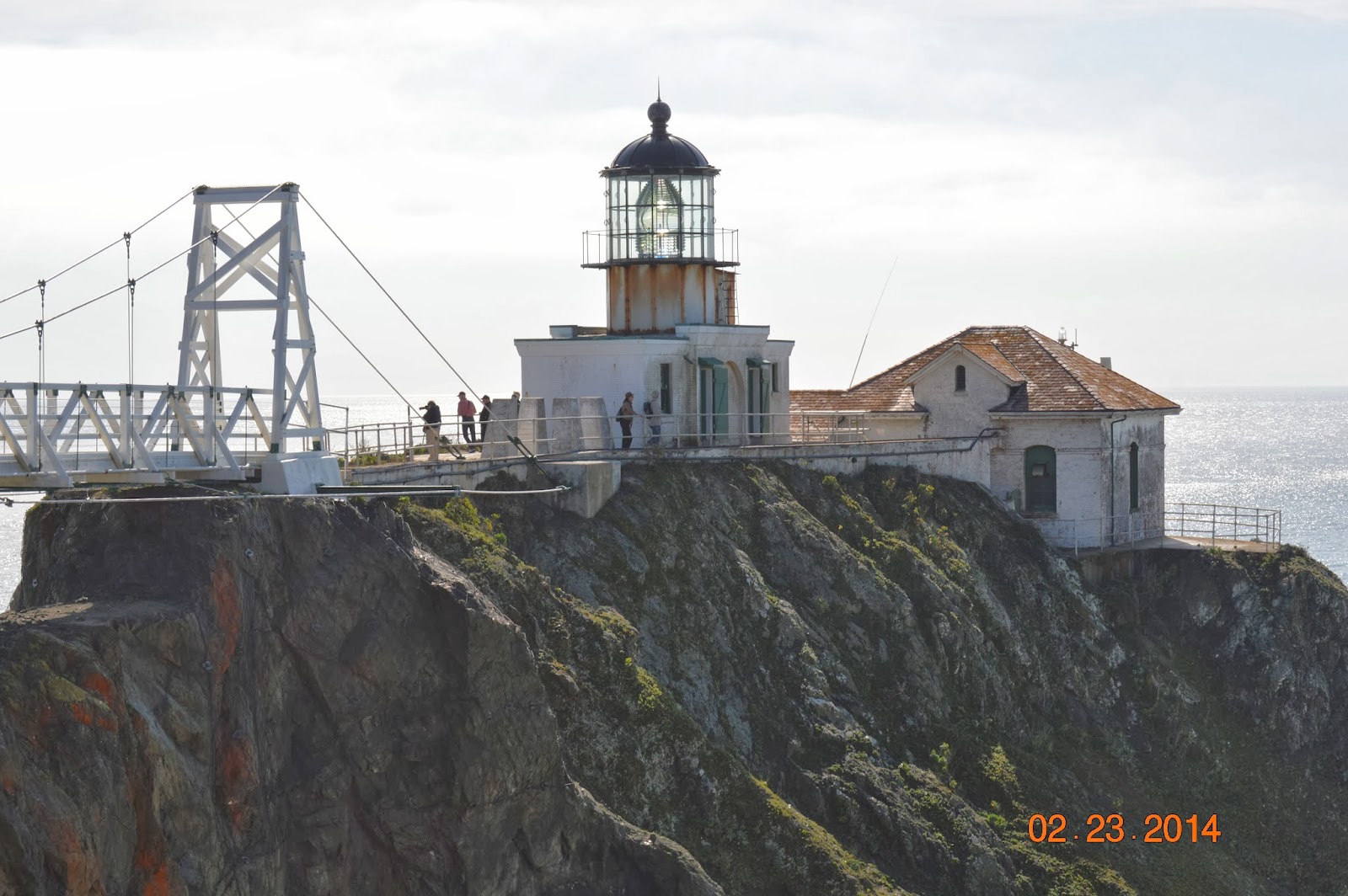 When we got to the lighthouse, I chatted with Jean, a volunteer (as a National Park Conservancy supporter and as someone who had wanted to work as a park volunteer, I feel a closer affinity to National Park volunteers). She told us a little bit of history about the lighthouse. Originally built on the very top of the hill, the light was often obscured by the fog and not visible from the bay. So it was moved to its current location in 1877. It’s perched on a hill, 134 feet above sea level. It has the first fog signal on the West Coast. The tunnel that walked through earlier and the ruins of the pier and railroad tracks we saw below the cliffs were part of the lighthouse historical landscape.  There were more than 300 boats that passed around the Golden Gate during the Gold Rush years, so the Coast Guard Rescue station, not only saved the shipwrecked, but served as customs clearing.

Click here Point Bonita Lighthouse brochure  to read more on the history of the lighthouse. 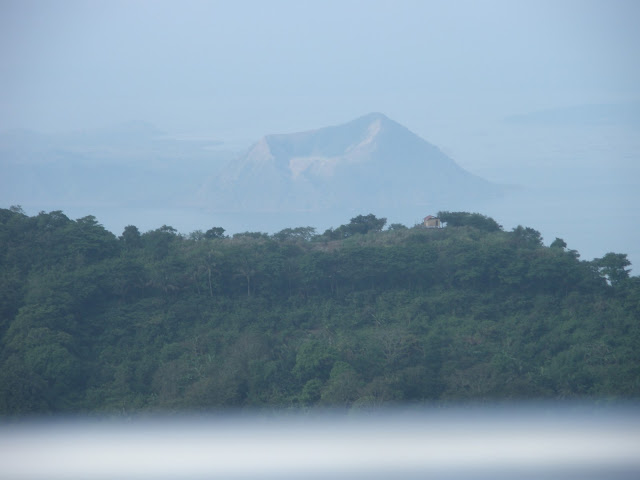 Taal Lake is described in Patricia Schultz' book as, “… one of Asia's most beautiful panoramas. Among the world's lowest and smallest volcanoes, Taal is filled with water, creating a lake, yet the volcano itself is located within a larger lake (as the tour guides are wont to chant, "A lake within a volcano, within a lake, within the island of Luzon.")The blues and greens of the vista from forested Tagaytay Ridge have for generations made this a favorite getaway from the heat and chaos of downtown Manila." To see this amazing wonder, we hired an air-conditioned SUV for P3700.00 pesos for a return trip from Quezon City (Metro Manila) to Tagaytay. The car rental included gas and a driver. We drove south-west for almost two hours until we came to Tagaytay City lookout - a vista point on the side of the road. The view was already spectacular but we wanted to go to the volcano island up-close. At the Tagaytay City lookout, we were approached by a few wou
Read more 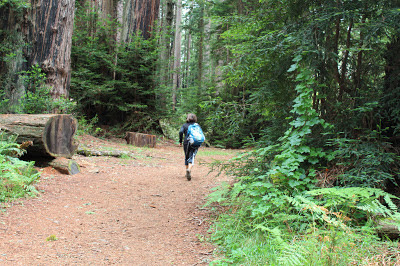 A Walk in the Woods with Keats The last time I visited Muir Woods, I hiked the Dipsea towards the summit and descended the equivalent of 680 steps to Stinson Beach. I also complained about not being able to take pictures with my phone camera. Click on the link for the story: http://www.greencaviartravelblog.com/search/label/Dipsea On a recent visit,  I wanted to  retrace my steps from that Dipsea hike, but few minutes after our ascent, I was gasping for breath.   I was not in shape, perhaps from months of continued traveling and not having a daily workout routine. When my lungs finally calmed I saw the place, literally and figuratively, in a new light. The hike became a meandering in the woods.  We took lots of pictures and completed a five-mile hike looping from Dipsea Trail to Ben Johnson Trail to Muir Woods visitor entrance. Lover of loneliness, and wandering, Of upcast eye, and tender pondering! Thee must I praise above all other glories That smile us on to tell
Read more