China: The Maglev Train in Shanghai

Called the 'Las Vegas of the East', Shanghai is famous for modern buildings and high skyscraper. Because of its strategic location, where the Yangtze meets the Pacific, it became a popular destination for foreigners.  Portions of the city had been partly controlled by foreign powers in the mid-1800s and eventually by Europe and the US, making it the second most westernized city (after Hongkong) in the country. It continues to serve as the financial capital of China.

I remember walking the 'Bund' which was sandwiched between the 19th century-old buildings along the river and some of the highest skyscraper in the world, and visiting Pudong district, where we saw the 460m Pearl Tower (like a minaret with three little balls in between), the 420m Jinmao (a giant bottle opener), which comprised the famous Shanghai landmark, and a few more buildings under construction like the 'Shanghai Financial Center Bldg' (suppose to be the 3rd tallest building in the world at the time). Yes, it was so modern that the shopping mall looked like a temple/pagoda theme mall and as if it were a Chinatown in China?

The most memorable moment of my trip to Shanghai was the Maglev train ride to the airport. The train speed was shown on a display monitor.  It was fun to watch and feel it moved from 155km/hr to 430 km/hr. The trip to the airport took less than eight minutes. The Maglev train was the first commercially operated high-speed magnetic levitation line in the world.  I thought it was a symbol of Shanghai's modernity. 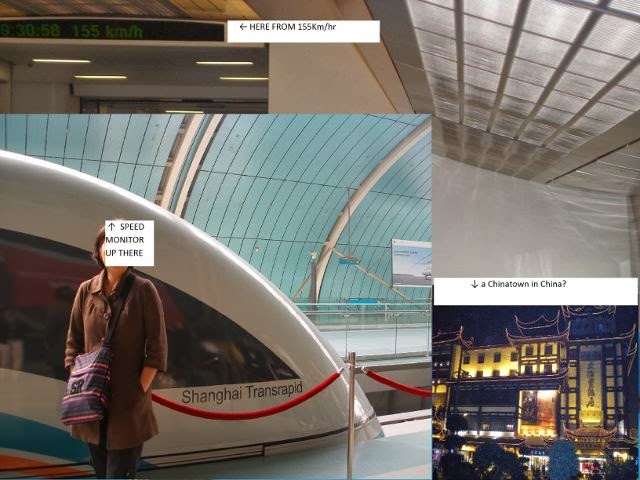 NOTE:
I did some photo manipulations by stitching a few pictures together, adding 'memes' (typing texts over my face), and re-sizing the photo to make it load faster.  Hence, the poor image quality.