Rounding Horn: Ending and Beginning the Year at the End 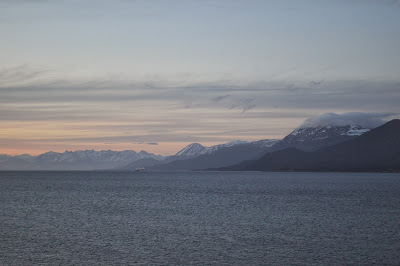 It was early dawn when I heard the captain of our cruise ship announced through the PA all that technical navigational stuff like, “the prevailing winds of the 50 something parallels of Southern Latitude” as we round the horn. Cape Horn is at a latitude 56° 58’ 47.5” South, longitude 67° 16’ 18” West.

Two weeks ago, I was at the end of world, the tip of the map – Cape Horn, where two great oceans: the Atlantic and the Pacific collide, and six hundred miles away from the icy and forbidding shores of Antarctica.

The day prior to rounding the horn, our on-board travel guide gave us some history, geography and myths about Cape Horn. Cape Horn, Isla del Cabo de Hornos in Spanish is the southernmost end of the archipelago of Tierra del Fuego in Southern Chile. It was originally given the Dutch name “Kaap Hoorn”, in honor of the Dutch merchant-explorer Le Maire and Schouten’s hometown. Among the first explorers were Sir Francis Drake, whose storm-tossed detour led to the discovery of Drake Passage, and naturalist Charles Darwin, who rounded the Cape as a passenger on the H.M.S. Beagle on his way to the Galapagos Islands. All these historical and navigational information went way over my head. What was stuck in my mind was the ‘feared and storied’ story like the countless ships that did not make it; their carcasses littered the ocean floor. We were supposed to expect rough sailing.

As it turned out, our passage was most pleasant - the lightest of breezes and very calm seas, far more comfortable experience than the early explorers to this part of the world experienced. Someone (not an official of the ship) made a comment that, during our passage, both the Atlantic and Pacific oceans were at their calmest in 15 years. Later that day, I spent the afternoon lounging on the ship's open-air aft and enjoyed the smooth sailing and scenic cruising. 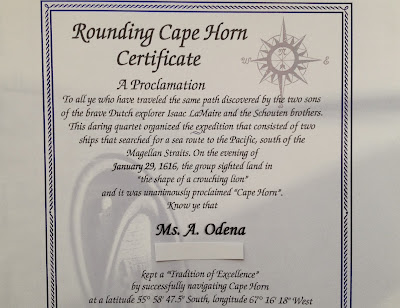 When I returned to my cabin, I found a ‘Rounding Cape Horn’ certificate. The skeptic in me thought that it was part of the cruise ship’s subtle marketing promotion, to encourage customers to returning to visit and experience other UNESCO World Heritage sites, it was cheesy.  At the same time, as someone who is obsessed with the sea, I thought I would keep the certificate and place it alongside the well-deserved and authentic certificate for walking the Camino de Santiago.