An Evening with the U.S. Secretary of the Interior, Sally Jewell 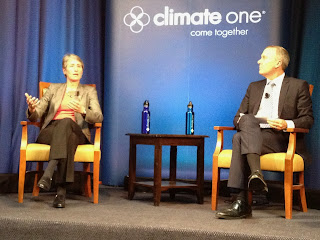 I attended a ‘Climate One” discussion with the U.S. Secretary of the Interior, Sally Jewell on Thursday. “Climate One” is a special project of the Commonwealth Club, seeking to foster wide-ranging discussions on environmental, energy, and climate change issues, and making the discussions available to a broad range of people around the world. It was a privileged to hear and ask the head of the Department of the Interior, which is responsible for extracting resources from public lands and protecting the landscapes, herself. The whole program will be broadcast on NPR (KQED in Northern California) so I’ll just summarize the key points.

Secretary Jewell started out by giving a background on the role of her department, which has the responsibility of the US owned public lands and natural resources, protecting water resources and wildlife, and preserving the environmental and cultural values of national historic places, promoting clean air and breathing space. She explained that her department has the opportunity to make those public lands accessible, and work alongside cities like San Francisco and many cities around the Bay Area and the country to highlight the importance of public lands.

Department of the Interior’s approach.

Impact of Climate Change is everywhere and very real. For example,
There were plenty of questions to the Secretary, from President Obama no longer debating climate change, fracking, Keystone Pipeline, energy independence to removing wolves from endangered species list. Some of the most important questions and answers are as follows:

Q. How can the administration promote climate change while supporting energy and coal pollution?
A. Policy drives behavior. Can’t switch from fossil-base to renewable energy overnight. Work with business community to change behavior base on incentive.

Q. How can the average person affect change?
A. Through conservation (i.e., conserve on water and gas). Bring voices to Washington DC, effect change through your elected officials and representatives; it does make a difference.

After the program, we had the opportunity to chat with the Secretary one on one. When I told her that I was a blogger, she told me to visit and blog about the National Park System. Since I already ran a seven series blog on National Park System, I thought I would compile the pictures from those blogs and create a video blog.


IF YOU CAN’T SEE THE VIDEO BELOW,  CLICK HERE TO WATCH IT ON YOU TUBE


Climate One U.S. Secretary of the Interior