Ballooning Over the Napa Valley (Not)

While most of the California hills are brown at this time of the year, the Napa Valley is fertile and green. I have always enjoyed driving to the Napa Valley along Highway 29, bordered by vineyards and the green rolling hills on each side of the road. While attending a family gathering in Napa last month, I saw a partial view of the verdant landscape from my sister’s house. I thought it would be nice to see the landscape from a different perspective. That is, looking down into the Napa Valley and seeing the whole spectrum, so I signed up for ‘Ballooning over the Napa Valley’ adventure. This activity, however, requires advance planning. You cannot just call the balloon company and say, ‘Hey I want to ride in your beautiful balloon today.” First off ballooning is dependent on the weather condition so that it is a very important component in the ‘terms and conditions’, and cancellation policy. Second and most importantly: the hours. In order to catch the perfect weather condition, the ideal time of day to fly is somewhere between dawn and 10:00 am.

We had to be at the meeting place before 5:30am. Which means I had to be up well before sunrise to allow for the additional one and thirty-minute drive time to Napa or stay in Napa the night before in order to make the meeting time.  Ted and I showed up at the Napa Valley Marriott Hotel and Spa lobby, where the balloon company set up shop, before 5:30am. There was continental breakfast (coffee and pastries) waiting for us. We then checked-in with the Balloon Company representatives and signed a waiver - a contract that rule the balloon company out from any injury liability.  After everybody had finished filling out the paper work, a company representative announced that there was plenty of low fog in Napa valley so that we could not do the ride over the Napa Valley. The launch would be moved inland, at Winters - a forty-five-minute drive from Napa. The riders would not see vineyards but farmland instead. We were given the option to cancel, but I was already up and ready to go. Nobody cancelled. We loaded up into the van and were driven to the new location.

During the drive to Winters, I was miffed that we were not ballooning over the Napa Valley. I talked to the other passengers and found out that all of them came from out of state. One couple came from Toronto, Canada and another couple from Hawaii, so there was really no recourse for them but to go on the ride. I thought that the company could have told the riders the afternoon before that there was a better than average possibility that the location could change. I understood that the ‘weather condition’ was specified in the terms and conditions and that no one could control the weather, but I felt that the company had been in this business for a long time and could have told us in advance rather than minutes before the ride. It seemed that the company could easily use the ‘weather condition’ as an excuse to do the ballooning somewhere else. Do they ever launch and fly above the Napa Valley, I wondered. 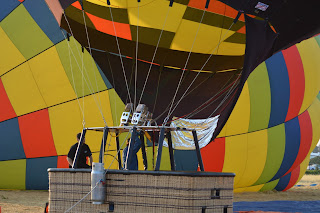 When we arrived in Winters, two huge multi-colored balloons were laid flat on the ground, the pilots testing their gas burners as our convoy of five vans approached. Crews checked the ropes and wires and began their process for inflating the balloons. Huge fans were blowing air into the balloons until they started to take on more recognizable shapes. One of them in bright yellow, red, blue and green to be piloted by JP, the other in bright yellow, red, blue and black diamond pattern to be piloted by SC and was to be my ride for the day. The 24 riders were divided into two groups. The ground staff motioned for us to get inside the basket.  After one last helium pump, our balloon was up fast and high into the early morning light. The two balloons did not ascend in tandem. Perhaps it was done by design so that the riders from the first balloon could take pictures of the second balloon from a different perspective and vice-versa.  For instance, I was able to take pictures of the other balloon shadow. Once the balloon attained a decent height, I began taking photos like some paparazzi, and kept taking pictures of the other balloon and the same view throughout the whole ride. And looking over the same view of commercially fertilized landscape instead of fertile and verdant landscape got boring after a while. We saw few balloons from another ballooning company (I assumed) from a distance, hovering over farmlands.

As far as the ride itself, the ascent was exciting, but once we were up, it felt as if we were not moving at all. According to our pilot, we covered around 6 miles at a speed of 2 miles per hour. It felt to me as if we were suspended up in the air, looking down into the same view just as I could be on top of a hill or a building looking down. So for me the ride was not worth the $250 - $300 fare.

Our pilot was not particularly chatty, but was willing to answer questions. I could hear JP, the pilot from the other balloon on the ‘radio’ - communication between the 2 pilots and ground crew. Despite technological advances, the pilots and the ground crew still rely on the naked eye and old fashion walkie-talkie. For example, the truck drivers/ground crew used helium balloons and kicked the dirt in the air to determine the speed and direction of the wind. I could hear the conversation between JP and the truck driver. JP said, “Hey, I see that there is a wheat field, but I think I see people on the field.” The truck driver replied, “Those are not people, those are bushes.” JP then replied, “I think those are people though!” He kept repeating and insisting that those were people.

Then our pilot talked to us about landing. He said that depending on the wind, he could land off-course. He mentioned that he once had to pay for damage for landing on a cornfield. It reminded me when I was just learning how to drive; I drove the car into my sister neighbor’s yard in Napa and ruined the sprinkler system. From an economic perspective, it made sense to me why the balloon company would do the ballooning over farmlands than vineyards in the Napa Valley.

Just as our balloon was first to ascend, it was also the first to land. Our balloon hit a couple of walnut trees, but the landing was softer than I anticipated.

Ballooning Over the Valley Napa Valley