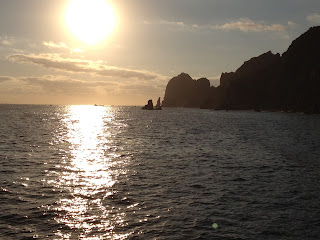 Our ship dropped anchor in the middle of the harbor. We took the 'tender' to get to the pier/port. The waves were high and rough and getting on the boat was physically challenging. As if to tell us that we could not just go back and forth to the pier and have a drunken party or we would not be able to get on the tender. Before leaving the cruise ship, we were given some background about the place and precautions as to what and what not to do in Cabo. The impression that I had about Cabo San Lucas as a bustling hub for water sport aficionado and party seekers was confirmed as soon I stepped out of the port checkpoint area. A few steps away from the checkpoint area, I found a huge souvenir store, restaurants and bars (emphasis on the bars) featuring Senor Frog (famous place for wild drunken partying). We were approached by many tour guides offering ATV tours, boat tours and all kinds of water sporting activities: para-sailing, deep sea fishing, snorkeling tours, etc.

Except for a cruise to see Lands’ End and Lovers Beach, we decided on not taking an organized land excursion, but to explore the town on our own. We looked for a cab to go the beach, but we already walked the length of a long city block to the Wyndham Hotel and still did not find one. Then we walked the length of the pier under the hot sun and still did not find a cab. We asked someone who appeared to be a law enforcement officer where we could find the nearest beach. He told us there’s a beach behind the Casino and Hotel. From where we were standing it looked really closed, but it was quite a long walk. The walk to the beach was well worth it. I swam on the warm pristine water and frolicked on the beach. The beach was lively, lined by bars and restaurants. After spending a few hours at the beach, we decided to go back to the pier by water taxi. Unfortunately, we ignored the precaution given to us about avoiding the water taxi. The water taxi operator did not tell us that we had to pay to exit the pier. It was not about the amount, but the taxi operator from the beach, the water taxi driver and the pier toll collectors seemed to be in cahoots to make an extra buck. The precaution was also for safety reason. Apparently there’s high accident rate with water taxis. While waiting for our boat to take us for our Land’s End tour, I went to Senor Frog and ordered margarita. I was totally surprised to learn that a glass of Margarita cost $15.00. When I asked why they’re so expensive, the waiter showed me the glass. It was the size of a pitcher and that was the smallest size they served. 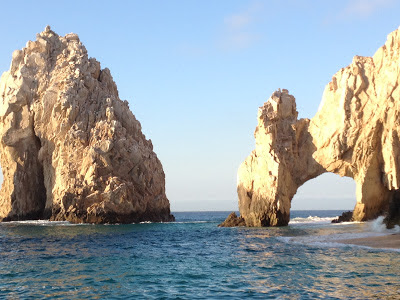 We boarded the catamaran to see Los Cabos most dramatic natural attraction, a rock arch at the tip of Cabo San Lucas where the Sea of Cortez met the wide open Pacific - Land’s End and Lovers Beach. Our boat cruised from the Baja side (Sea of Cortez) where the sea was calmer. The view of Cabo was more dramatic from the sea. We saw white expanse of beach and the rocky hill dotted by sprawling condos. As we reached Land’s End, we saw dramatic surges through the opening. As we got to the Pacific side, the waves got bigger, producing more dramatic surf surges. Lover’s Beach was also more prominent from the Pacific side. 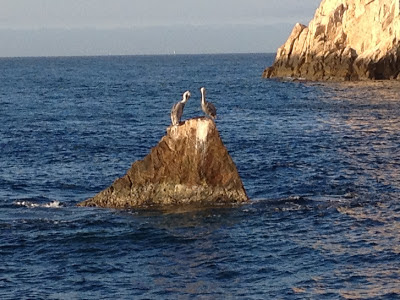 Before reaching Land’s End, we saw a rock in the middle of the harbor, surrounded by sea lion, a couple of pelicans perched on top. Tiny dolphins followed our boat. It looked surreal. Land’s End maybe the most photograph site in Cabo, but the sea animals were amazing that I had to keep my camera ready throughout the whole boat ride.
Cabo San Lucas Mexico