#11 Bavaria, Germany: From Salvation to Libation

A Centuries-Old Labor of Love

The Passion Play of Oberammergau in Bavaria, Germany is an event staged every ten years to honor a vow made in 1633 to spare the village from the plague that devastated Europe. This event is participated by the whole town and listed as a ‘must-see’ in many bucket lists. The play ran late May to early October.  My sister booked us on this trip two years in advance as she did not want to miss out on the opportunity of seeing this event this year, but that travel plan turned into a nightmare. Needless to say, my sister’s Oberammergau travel plan debacle left us with a mixture of disappointment, apprehension, ruined schedule, and very little money to spend on our next trip.  But I kept hearing my sister's nagging voice in my head, "If we didn't go now, 10 years is a long time to wait."  So I scoured the internet in hope of finding something similar to our original travel itinerary to no avail. It may seem unreasonable to find availability this late.  I took a chance and booked us on a last minute trip - a tour to Prague, Vienna and Budapest that starts in Munich.  I was hoping that we could fly into Munich 2 days before the tour and take the train to Oberammergau and get our tickets to the play once we're in town. This tour was booked through, literally, affordable tours.  I was impressed with the way this travel agency handled their booking. Very efficient! Considering the timing of the trip, we received our complete travel package in time for us to thoroughly review the terms and agreement, travel itinerary, hotel list, and e-tickets.  Under normal circumstances, I would have booked our flight directly with the airline company.  But the inclusive package was more cost-effective.  You could also request an airline where you have a frequent flyer membership. For example, the common carrier that this travel operator uses is Delta Airlines. Delta has now partnered with KLM and Air France. So you would be able to receive frequent flyer miles credit in any of the airlines mentioned for which you have frequent flyer membership.

It had been a smooth and crowded flight from San Francisco to Amsterdam.  There were two good movies that distracted me from getting some sleep during the flight.  From looking at the 10-day forecast on-line, I anticipated that we would be under dripping gray skies during this whole trip.  It was raining when our plane touched down in Amsterdam. We waited for 1 1/2 hours for our continuing flight to Munich.   I noticed many flights arriving in Munich airport at the same time, so that the lines at the immigration/customs and baggage claim areas were long.  I thought Oktoberfest must be the reason for the crowded airport, but a fellow passenger told me that they’re here for the dog sporting event (apparently a big event in Munich).  The ride from the airport to the hotel was short. We were greeted by our tour director and met fellow tourists (2 couples) who were talking about going into the town center for Oktoberfest.  With the time change, exhausted from the flight and the long wait at the baggage claim, and having been hit in the head with a luggage from the overhead compartment, I collapsed as soon as I hit the hotel bed. My last conscious thought was about catching the train to Oberammergau. This conscious thought was continued in a dream about the day’s event. I dreamt that my family gathered into small gothic church in Bavaria for my baby’s baptism. When the priest asked, “What name do you give this child?” my husband replied, “ München, in honor of the city that hosts Oktoberfest.” Noooooooo! Thank God, I was awakened by the phone ring.  Needless to say, we missed the 6:00pm orientation and pretty much wasted the whole day.  So I guess we would have to wait another 10 years to see “The Passion Play at Oberammergau.” 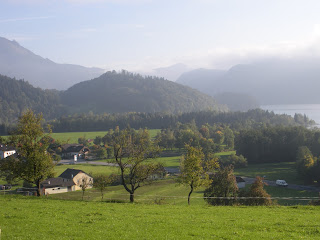 By 8:00am the following morning we were on the coach to Prague. Okay, we did not exactly ride the horse-drawn coach along the King’s Road to visit the Neuschwanstein Castle (the castle that inspired Disneyland) as suggested in the book, “1,000 Places…” We were on a very comfortable coach (tour bus) driving through the autobahn. Amid breathtaking scenery, I saw a few high clouds tumbled across the great blue stretch of the morning sky. There are few better settings for a morning drive than the view of the Alps alternating with emerald green valleys and forests.


We had a dejavu on our return to Munich from Austria. It was a comfortable and relatively a short drive past Lake Chiemsee to the Munich area, but the scenery was simply amazing – my version of coaching in Bavaria. 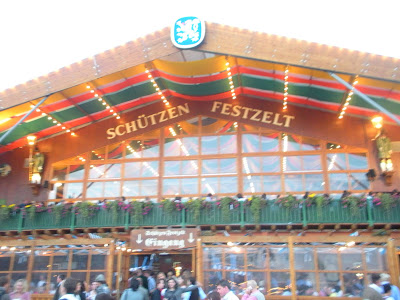 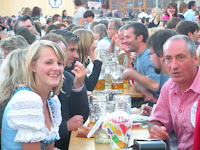 Oktoberfest was not part of our tour, but our tour director gave us some background about this event. The public was invited to celebrate the wedding of Princess Theresa to the Crown Prince Ludwig in 1810. It could not be verified whether beer was served at that time, but that was the reason for the first-ever Oktoberfest.  Today, this festival is celebrated not only by Bavarians but by beer lovers and strangers from around the world.  The celebration lasts for 16 days, starting in September and ending on the first Sunday of October.  Oktoberfest opens with a colorful parade of thousands of participants and wends through the main streets of Munich.


Our tour director mentioning the fact that she hated Oktoberfest piqued my curiosity. So upon our return to Munich from Austria, we went to Marienplatz, took the underground to Goetheplatz station and walked about 3 blocks and followed the women in Bavarian costumes (Oktoberfest waitresses) to the Fairgrounds. The fairgrounds are so huge and filled with shooting galleries, rides and merry-go-rounds, refreshment stands and beer houses - the size of a football stadium. Since I'm not a beer drinker nor into shooting galleries and I hated the crowd, this would probably be my last and only visit to this event.  But I'm pretty sure the beer-chugging crowd would enjoy the experience!  Prost!

Last month, I visited Auschwitz, the site of the most notorious extermination camp in human history. Finding the right words to describe how I felt while standing in the spot where millions of people were murdered was very hard. It was beyond comprehension. I just got to sorting the pictures and videos I took from the trip when the shooting at the Tree of Life Synagogue in Pittsburgh happened. So, imagine how I felt when I heard about the senseless killing in the United States. I kept going back to the sights I saw in Auschwitz and the words of George Santayana, “Those who do not remember the past are condemned to repeat it.”  So, if you do have the opportunity to visit Auschwitz, you should. But I understand that not everybody will have the opportunity, so I just wanted to share some insight from my trip.

Auschwitz I - The Main Camp
In 1940 Himmler, the head of SS ordered a former garrison site in the town of Oswiecin (Auschwitz in German) to be taken over and held as a concentratio…
Read more